or the difference between Bob Anderson and me

I didn’t plan to stop racing. I just meant to take a break. In April of 1995 I turned fifty. Stretched out behind me were three decades of running which included twenty-five years of serious racing, over 500 races, and God knows how many long runs, intervals, time trials, and tempos. Throw in the usual rain, sleet, and wind and a break was in order. I didn’t announce I was going to stop racing. Who cared outside of myself? I just quietly stepped away.

I kept going to races whenever the urge grabbed me but I stopped strapping on the heart rate monitor to make sure my training runs were at the right effort. I could still lay down a sub 20:00 5k and maybe even place in my age group. Every four to five years as I was about to enter a new division, I would start trying to convince myself that I was ready to go back and race hard again. Fifty-five passed with more of the same threshold races. In the dark of the night when other run-ners tossed and turned nervously contemplating an all out race effort, I slept like baby knowing that whatever time I ran in my next race the effort would not involve the accumulation of seri-ous lactic acid. Finally I had to face it. I had lost my edge, the willingness to race hard. 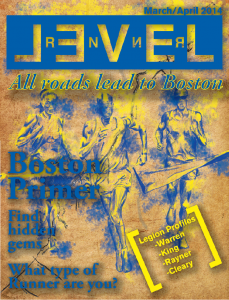 One of my good friends is Bob Anderson, the founder of Runner’s World. Bob has been running and racing for fifty-two years. His best racing years took place after he had sold Runner’s World in 1985. (Editor’s Note: Will selling this rag make me faster?!) He simply had more time to train. I’ve known Bob since 1973 and even in the years he was working overtime to make his magazine successful he still showed up and raced, and if he raced it was all out every time. It was the only way he knew how.

Several years ago at age sixty-four Bob celebrated his fiftieth year of running by setting up a challenge. His rule was simple: run fifty races totaling 350 miles and average under 7:00 pace overall. To put this in perspective, it’s akin to averaging 5:24 pace at age thirty. Bob ran a smorgasbord of distances, racing 5k one weekend, a half marathon the next, followed by a ten miler after that. The gotcha was that he had to average seven miles per race. A 5k one weekend meant a ten miler or half marathon the next.

He asked me to help advise him during the challenge. I was either phoning, emailing, or meeting him in person every week. To me the whole challenge was one of balancing and managing races, the distance and pace. My theory: if you don’t need to run all out to stay under 7:00 pace, then don’t do it. Keep a little in reserve because you would need all you could muster just to get through the fifty races.

But while he listened politely to me it soon became obvious that Bob simply approached each race the same. He ran every one of them all out. He ran in heat, cold, wind, and rain all over the country, all out. The concept of tempo running a race to conserve energy was lost on him. “It’s the only way I know how to run,” he told me. In the end Bob made his goal but it came down to his final race. As expected, he gutted it out like he did the previous forty-nine.

It occurred to me that even during my best competitive years in my thirties and forties that I hadn’t raced every race the way Bob did. I had a dozen serious races that I had pointed towards each year and those I ran hard. My other races, while run at a strong tempo effort, were rarely all out. I had practiced tempo racing. I understood it. Bob didn’t.

Several times in my sixties I’ve tried to get back into racing. It hasn’t worked out for me. That racer’s edge I had at age fifty, the age when I decided to quietly step away, is pretty much gone. Bob continues on. All he needs is a race and goal. One thing I know for sure: he’ll run hard.

Rich Stiller has been running and racing since 1968. This article originally appeared in the Mar/Apr 2014 issue of Level Renner. Get your free subscription today (box in upper right portion of screen).