Is It Possible To Race “On Accident”?

We all know competitive athletes love to race. But some of us who like to race a little too much might find a new and exciting event and just register for the fun of it. That’s not necessarily a bad thing, especially if that “accidental” race is treated as a workout. Gary Cattarin of the Greater Boston Track Club voices a good opinion in the following excerpt from his blog The Second Lap:

A while back a club-mate posted what struck me as a very amusing little graphic, even if to many of you it’s probably old and overused by now. Just go with it, humor me. At my advancing age, I completely identify with the absent-minded Dory (that’s from Finding Nemo if you just swam out from under a reef). Um, what was I writing about again? Right! 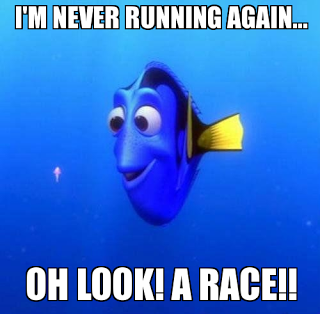 The bit about, “I’m never running again” certainly doesn’t apply to me, but the second half, “Oh Look! A Race!” is right up my alley. What’s been killing me these last months has been how few of them I’ve run, and how I’ve missed the camaraderie, competition, and development that come as part of the package. But, knock on wood, that pesky Achilles is finally starting to feel better, here on the full year anniversary of going in for that repair job, though in its place, the left knee is offering great grief despite all attempts to ignore it. Knee aside (Damn the torpedoes!) that puts me back in the marketplace, looking for races to tune up those skills again. I just didn’t expect to run one entirely by accident.

Eugene was a reasonably important race for me; a test of recovering fitness level at the longer distance, being already qualified but still aiming for a better Boston seeding time in a fall marathon. But while I pushed it hard, it wasn’t a speed contest, nor the body-wrecking full marathon distance. Coming off it I felt little collateral damage, but still, there was recovery to be had. The following week’s travels, not restful by any stretch, and punctuated only twice by easy runs, left me high on the stiff & sore scale upon return to my native time zone. Stiff, sore, and of course miles behind in my work. The first bits I’d just have to deal with. But at least the work bit was eased by convenient coincidence of having our company picnic slated on the first day back. Beats working, right?

But we’re a distributed workforce, so that picnic was down near Hartford. Not yet acclimated to the time zone, rising early for a run before heading south wasn’t an attractive thought, so I packed my bag and figured I’d catch whatever opportunity the day offered up for a few stiff and sore recovery miles. A couple of meetings, a couple of volleyball games (where at my size, I am utterly outclassed, but nobody cares), and a couple hundred pounds of food later, as the crowd began to dissipate it was time to slink away to the nearest phone booth to transform into running guy, then wander off through the park on a slow, stiff, and seriously overfed recovery jog.

Not so fast. You thought you were getting off that easy? Why are there a couple of runner-looking types wandering around the parking lot? Why is that one approaching me, and why is he asking me where the race is? Race? What race? There’s a race? Oh! There’s a race! Yes, just around the corner, barely a quarter mile distant, were gathering a hundred-plus for Monday night’s instance of the Wickham Park cross country summer Grand Prix series.

Who knew? How cool is that? Seriously, who could resist? (Don’t all raise your hands at once!)

Now, if you’d asked me the day before, even hours before, if I’d want to run a race that evening, the answer would have been unequivocally no! Stiff, sore, tired, and of course, post-picnic, stuffed to the gills with foods I’d rather not itemize. (Why, oh why, did we eat desert afterward? Yeah, because it was there…) But if you put it in front of me like that… You’re here, there’s a race here, and it’s my kind of race, for the runners, just a couple of bucks… Hello, Dory! Oh look! A race!

I did a quick mental calculation while warming up with gentleman who’d initially asked me about the location of – and in the process lit me up on the existence of – the race, and decided that I had but three goals, in order of importance: first, don’t lose my lunch, second, get a good workout in, and third, soak it up. God sent me a race, right when I needed it. Enjoy it!

Yes, that first goal sounds a bit less than polite, but trust me, you don’t know how much we’d eaten.

As it turned out, this race series is seen as the summer tune-up for many area high-school cross country athletes, not the least reason being that Wickham Park happens to be a key location for big meets and at least sometimes, the state championships themselves. It’s a big draw. Or in other words, the field was smokin’. There followed a giant sucking sound, pulling me into the first loop far faster than I deserved or could reasonably stomach – really – and even with the best I could muster, still watching only the backs of a large group of mostly fast young guys.

Rarely have I gone into a race less ready. On top of everything else working against a rational decision to race, this one was also short – claimed at only two-point-six but even shorter by my estimate – and fast. I’ve prioritized fitness and endurance this year and have been absent from the track entirely since popping that hamstring in early June. I couldn’t have picked a worse race at this given time.

Yeah, so what? Just run, you idiot! The field was kicking my butt, but I was among my peeps, running trails and fields in a beautiful park, and getting in a far better workout than I’d planned. And at least to that point, I still had my lunch.

I’d like to tell you that out of some deep reservoir of unknown strength I pulled out an amazing performance, but that would be an utter lie. Rather, I enjoyed the scenery, huffed up the biggest hill around the mile-and-a-half mark, and made the final loop – a reverse of the initial loop – considerably slower than my first time around, a decidedly strong indicator of a decidedly not-so-strong race. There was really nothing competitive about it, save for the fact that I thought I saw an old guy or two in front of me and for a brief moment considered a chase. Turns out I was right – there was one fifty-plus up there, but there wasn’t a thing I could do about it.

But hey, I didn’t lose my lunch. And I got in a great workout. And I had a ball, over the notion of having a race appear in front of me, over the group of great people putting on the race who made for interesting chatter, and best, over wandering back to the few remaining co-workers, now even more bloated from more food and drink, in my post-race finest, sweaty and runner-style disgusting, but still offering up a good eyeful of a different way to have fun. What’s not to love?

And the ice was broken. It’s time to race!

Not to mention Gary was the third fastest runner over age 50 at our LVL 10k with his 39 minute finish! So go out there and support the great New England running scene. Be proud to belong to one of the best communities out there!

Articles, Racing Is It Possible To Race “On Accident”?
« Previous Story