Profile Tuesday. Every Tuesday we feature an athlete we have previously profiled in our magazine. This week it’s Sarah Bard. She was featured in our July/August 2013 issue.

The Bard of Running

In her senior year at Wellesley College, Sarah Bard decided to run the Boston Marathon.  The 2006 graduate struggled over the second half of the course but still finished in 4:01.  Her second half was about an hour slower than her first, and she recalls, “As I turned onto Hereford, I remember feeling like I couldn’t go any farther.  My coach, John Babington, ran beside me in jeans for the last 800 meters.  When there’s a man in jeans running faster than you, it’s much harder to give up.”

After Boston, Bard didn’t run for over a year.  She vacated to Montana; in time, the hills in big sky country were too much to ignore.  That and the prompting over her longtime friend and post-collegiate boyfriend, John Tuthill, who cautiously pointed out that she can be a bit unhappy when not running, convinced her to lace ’em up once again. Upon reflection Bard says, “Mountainous places are great for getting back into shape.  It’s good terrain for building stamina while not getting caught up in comparisons to past fitness.” 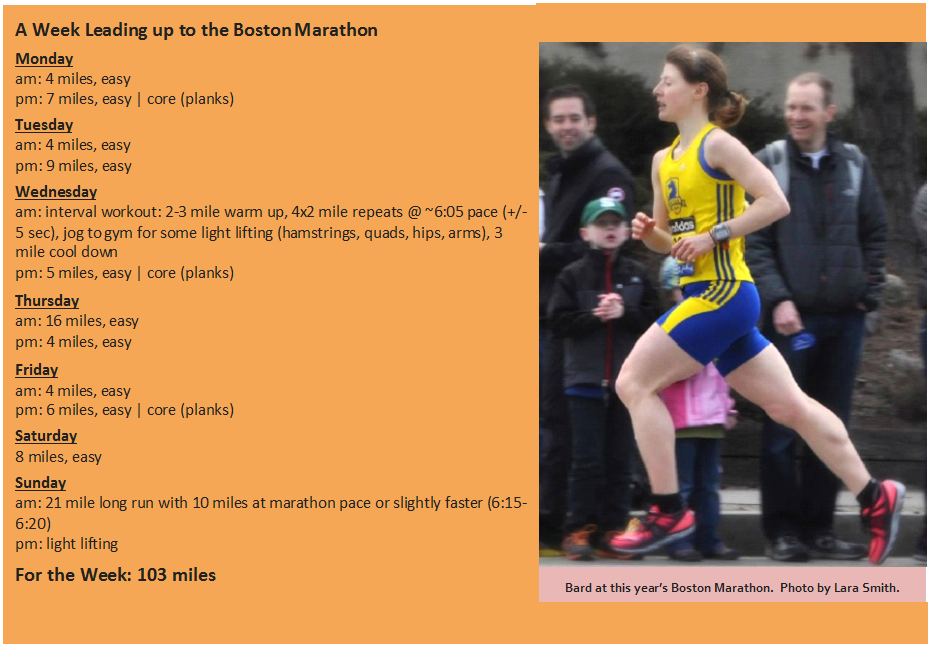 Having a firm support system in place allowed running to not only creep back into her life but become a significant part of it.  The transient Bard (residences include Chicago, Washington State, Virginia, Argentina, and the aforementioned Montana) returned to the marathon in 2008 and her progression since then has been  Jeannette Faberian (see table).

She attributes her most recent PR to her workouts with Carly Shea.  The duo often hit the roads at 0600 to execute the workouts designed by Carly’s husband, BAA coach Terry Shea (see a sample workout under Wednesday). Bard says, “I definitely wouldn’t have improved so much this winter if it weren’t for Carly, who steadily lead almost every repeat of every workout.”

Bard has come to learn that she thrives on high mileage.  She ran her first 26.2 on less than 50 miles per week but over the last six years she has doubled that weekly mileage to slightly over 100.  Not a big fan of track workouts, Bard enjoys tempo runs and long intervals the best.  A strict vegetarian, her post run refueling food of choice is pancakes.  Keep an eye out for Bard either on the roads or at the local diner.

Below is Bard’s impressive marathon progression.

Enough Of This Guilt Trip