The dynamic duo of Brian Harvey and Eric Ashe took Minneapolis by storm. In case you haven’t heard, both Unicorns absolutely crushed it at the Twin Cities Marathon (which also served as the national championships). Brian ran a 2:17:05 and Eric ran a 2:17:56, and they finished in 8th and 10th place, respectively. Most importantly, they both broke 2:18 which means that they qualified for the Olympic Trials.

Here is Brian Harvey’s race report from that day:

Overview: Almost definitely the best race of my life to date. Felt strong nearly every step of the way and I feel I ran an intelligent race. We had absolutely ideal weather (high 30s/low 40s, light wind that was a net tailwind). Excited to hit the Olympic Trials “B” Standard and to continue to build! 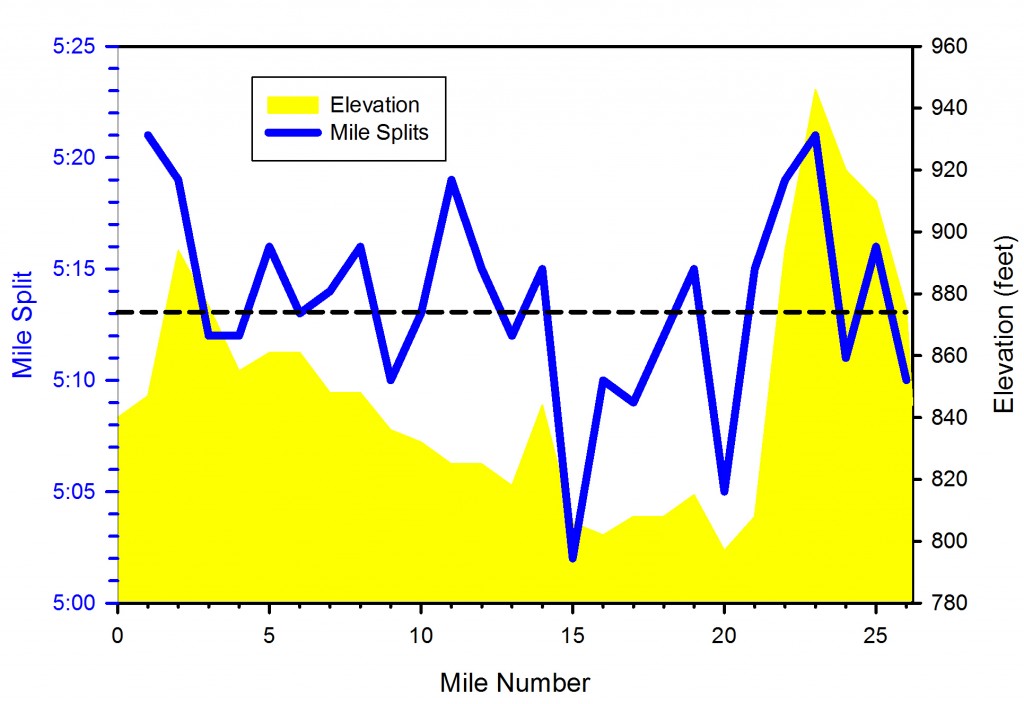 Background: I first heard they had toughened the standards on a run with Schmeckpeper a few years ago (I think they were “leaked” and weren’t officially announced yet). Shmk had mistakenly thought the new standards were 2:15/2:12 so I was relieved when I saw they were actually 2:18/2:15. I had no marathon experience at the time but the idea of running 5:15’s for 26+ miles was more than a little daunting. I definitely thought sub 65:00 for the half was the more realistic way in for me.

Pre-Race: This marathon cycle went very well and I was feeling pretty confident going into the race. The two 15 mile marathon pace efforts we did were particularly encouraging given how I felt during them. In general, 5:15’s felt a lot easier this time around than Boston’s cycle. If I had one (small) concern going into the race, it was a lack of hill work.

[If I have time, I will compare the two cycles in a more quantitative fashion (e.g. average miles per week, max mileage, 20+ runs, total miles @ mp)].

I tried to take what I learned from Boston in April and apply it to this race. Probably most importantly, I learned in Boston to not deviate from the plan, regardless of how good you feel early on. I felt really good during the early to mid miles at Boston and got a bit overexcited (5:10.8 for miles 11-16) which might have resulted in the blowup later on (or maybe not). Given this experience, I told myself I was not allowed to have fun until after 20M. I told myself if I was methodical for 20M, the enjoyment of feeling strong over the last 10K would be well worth it.

Energy stores where not a problem at Boston so I followed the same general nutritional plan for the week leading up to the race (carb deplete/load) and during the race (GUs at 7,13.5/19.5). I had my normal pre-race dinner with me. I also did about two weeks of over-dressing which some evidence suggests helps you in both cool and hot conditions so I’ll continue to do it.

The night before the race I was asleep by 9:30pm and slept well until 4am. Then I mostly just lied in bed until  getting up at around 4:50. Ate a plain bagel with PB and banana around 5:00. Had plenty of time to get ready before getting on the bus from St. Paul to Minneapolis at around 5:50. I forgot the coffee I made in the room so just bought one in the lobby. Had a Clif bar on the bus as well as Gatorade and water. Once in Minneapolis, we stayed warm in a hotel about 0.5M from the start. We walked over to the start around 7:25am and started a 5 min easy jog around 7:40. Did 2 short strides after the wheelers started at 7:55am.

The Race: Start to 13.1: Eric and I were in the back of the lead pack for the first mile. The pace felt good right away and I was perfectly okay seeing a slow first split (which ended up being my slowest of the race). The leader picked it up a bit during the second mile and Eric and I did our best to do our own thing. The second mile has some uphill so 5:19 was just about right. After that, we were able to start getting into a rhythm as we went around Lake of the Isles, Calhoun, and Harriet. We had a decent pack with us for most of this section (including Kevin Castille). We joined up with Cole around 5M. I think Eric and I did a lot of the leading throughout the race which maybe might be something to work on in the future. At the same time, the wind was minimal and generally a cross and/or tailwind for this section. We found a good grove and these miles went by pretty quickly with consistent splits.

There were several occasions during the race where I would accidentally start to pick the pace up a bit without noticing but Eric would quickly alert me we were going a tad fast (he has a bit of a better feel for our MP than me I think). This was very helpful and kept the effort even. We went through 10M a few seconds under pace and kept the train rolling through the half.

13.1 to 20: We hit the half in 1:08:52 feeling strong. A part of me was a little worried, since that only left room for a 16s positive split and I knew from looking at previous splits that the hills from 20-23 could add as much as 15s per mile (Tim slowed 5s/mi here, avg. was 13-15s/mi). The average positive split for the data I looked at on the course was a little less than 30s. Anyway, I stayed calm and knew we could gain a little bit of time over the next several miles since they were mostly flat or downhill. I was a bit surprised to see 5:02 for 14-15. I assumed the mark was off at the time but I now realize that mile has a really nice gradual downhill plus a tailwind so it reality it probably was a 512 or so effort. At 15M I focused on staying as relaxed as possible for the next 5 miles. It helped a lot to break the rest of the race into 3 sections (15-20, 20-23, and 23-finish). I knew I’d be in a good position if I could get to mile 20 feeling strong.

Eric and I naturally picked up the pace a bit during this stretch. I was trying to read what my legs were telling me. They were fatiguing but not quickly. I got nervous a couple times when my legs would get a bit tighter and thinking it might be the beginning of them failing. I learned from Boston that things can go from good to bad very quickly in the marathon. Keeping this in mind kept me from pushing more throughout this stretch. We passed Ruben at some point, who sadly was trying to stretch out a tight muscle when we came by.

Eric and I caught a group of two close to the mile 19 mark. I went past them as we crossed over the Mississippi. I noticed Eric had dropped back a little bit which I found out later was due to a stomach cramp. One guy (Blair Teal?) held onto me for a bit but was flying solo once I hit mile 20.

20-23: Saw I was nearly a minute under 2:18:00 pace (46s to be exact) at the 20M mark (why this didn’t alert me that sub 2:17 was possible makes no sense in hindsight). I was excited to hit the hills feeling good. I asked several people who raced TCM before what they thought of the hills from 20-23. I’d say 80% said they were really tough at that point in the race, the other 20% saying they weren’t bad at all or just moderately annoying. Of course, your impression is going to be heavily influenced on how your feeling at that point in the race. Tim had told me that he approached them as an opportunity to pass guys who were struggling rather than dreading them, a mindset I tried to adopt. There unfortunately wasn’t anyone close in front of me but I still was able to gain some ground. Since I felt good, the hills didn’t seem too bad to me, especially the more gradual one from 21-23. I averaged 5.2s slower than my overall pace for miles 20-23.

23-Finish: I was alone for this last stretch of the race but they were some of the most enjoyable miles I’ve ever run in a race. I knew I had a good time cushion and was still feeling relatively in control. I knew I could finish strong if I maintained the effort I was running, so I decided to be a bit conservative and not press. I focused on slowly reeling in Scott MacPherson who I eventually got at around the 26 mile mark. As I passed him I saw the clock and knew I had an outside chance of getting under 2:17:00. Kicked hard (~4:35 pace) to the finish but missed it by a few seconds. I wished I would have pushed a bit harder in miles 25 and 26. The number one was goal was to get the OTQ and so I was relatively conservative to be 100% sure I got that.

My first thought upon finishing (after processing that it really happened) was that I know I can go faster, especially with another cycle or two. I then was greeted by an escort (who was super nice, because everyone in MN is nice). I was okay and asked if I could wait for Eric to finish. My view of the finish was obstructed by volunteers so I didn’t see Eric until he was being held up by 2 volunteers and I saw 2:18:20 on the clock. I was very nervous he had just missed it again but quickly found out he had sneaked under!

Over the past few years, I had been playing a video in my head of me finishing the final stretch of a marathon and seeing the clock at 2:17:xx literally hundreds of times. It gave me chills every time (still does). To finally live it in real life more than lived up to my expectations. Excited (and a bit surprised) to learn later that I finished in the top 10!

Qualifying for the Marathon Olympic Trials had been a goal of mine since I moved to Boston a little over 5 years ago. It has not fully sunk in yet. I am extremely fortunate to have had the opportunity to train consistently for the past 5+ years. I somehow managed to live in one of the best running cities in the country with a very supportive club, motivated training partners, and coached by Terry who I believe is one of the best in the country (and the data supports this).

And of course my wonderfully supportive fiancee. I wanted more than anything for her to be there immediately upon finishing!

Excited to build off this one and keep moving forward!

Andrews Has His Sights on an OTQ at Hartford