Another November, another Rhode Island 6 Hour Ultramarathon & Relay to organize.  2014 marked the 6th annual race and the 6th year of amazing weather.  For some reason people keep coming back to Warwick City Park in Warwick, RI to run loop after loop of the 2.70121 mile certified paved course.

This year I had over 90 ultrarunners signed up, but a lot of no shows, assumedly with the nice weather, they were at the beach.  In the end there were 67 ultrarunners on the starting line along with 19 relay teams varying from 2 to 6 runners. 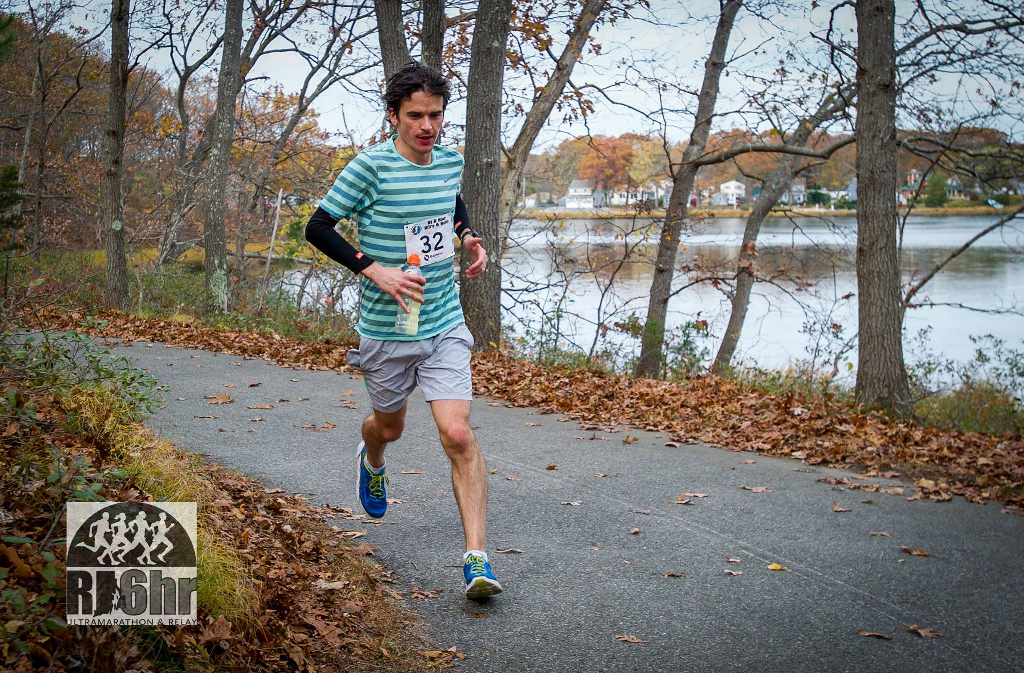 There were two clear favorites in the ultra, 2-time defending women’s champion Maddy Hribar was back and Patrick Moulton was on hand to give his first ultra a whirl.  Although this was Patrick’s first official ultra, he has experience running loops around WCP, he ran about 4 hours at the 2010 event part of a 2-person relay with his now wife, Katie Moulton.  They went on to finish as the 3rd place relay team that day.

Things seemed to play out as I had expected.  Pat ran sub 6:30 pace for the first 10 laps (27.01 miles) before he started to slow down, he then endured a tough hour between hours 4 and 5 before rallying back over the last 3 laps in order to break the old course record set by Ben Nephew at the inaugural event in 2009.  Pat equaled the distance set by Ben and Martin Tighe that day, but did it about 11 mins faster.  Pat passed through the 50 mile mark in approximately 5:37:59 before finishing his 19th lap (51.323 miles) in 5:47:43.  Since only complete loops count in the scoring, Pat called it a day.  Behind some “more experienced” runners were battling for the 2nd and 3rd men’s positions.

Greg Stone, 4-time RI 6 Hour finisher and Gary Allen were on the same lap all day, both finishing with 16 laps (43.219 mile) Greg having a 15-minute advantage at the finish line.

On the women’s side, it was Maddy Hribar whom was in charge all day.  She ran in the top 5 overall all day, most of the race with Gary Allen and she finished in 3rd place overall with 16 laps (43.219 miles)  This was Maddy’s 5th RI 6 Hour and 3rd win in a row.  As with the men, there was a great battle for the 2nd, 3rd and 4th positions all day.  Katja Fox, Alexandra Brinkert and Susan Kent all finished with 14 laps (37.817 miles) and were within minutes of each other lap after lap.   However, it was Katja that had the strongest last 3 laps to secure second place followed by Alexandra then Susan, they were all within 9 mins of each other.

A special shout out to Lee Dickey and Jake Schieffelin, for continuing their streaks, of running at least 10 laps in every edition of the RI 6 Hour.  Bruce Dube also started his 6th RI 6 Hour, but had to call it a day early.

In the relay there were no clear favorites.  We had an Open Division and a Female Division this year to spread the wealth of Bucket Brewery Beer to more teams; each team was made up of 2-6 runners each.

The open division had at least 6 different teams in the top 3 throughout the day.  At the end of the 6 hours there were 4 teams that finished with the same total of 19 laps, which just so happens to be the same total as the men’s ultra champion!  The 4 teams finished within 10 mins of each other with two Fuel Belt Teams taking the top 2 places, one team made up of mostly 12 year olds!  Port Racing rounded out the top three.

The cash and beer awards were handed out in a timely manner, so the runners and race crew could head over to Track 84 for the infamous after party, sponsored by The Bucket Brewery.

Thanks to all that ran and volunteered, see you in 2015!