The LVL cover jinx simply does not exist. Dan Vassallo graced our cover a year ago, and yesterday he achieved an Olympic Trials Qualifier in winning the Philadelphia Marathon. Read our profile on him from the Nov/Dec 2013 issue. 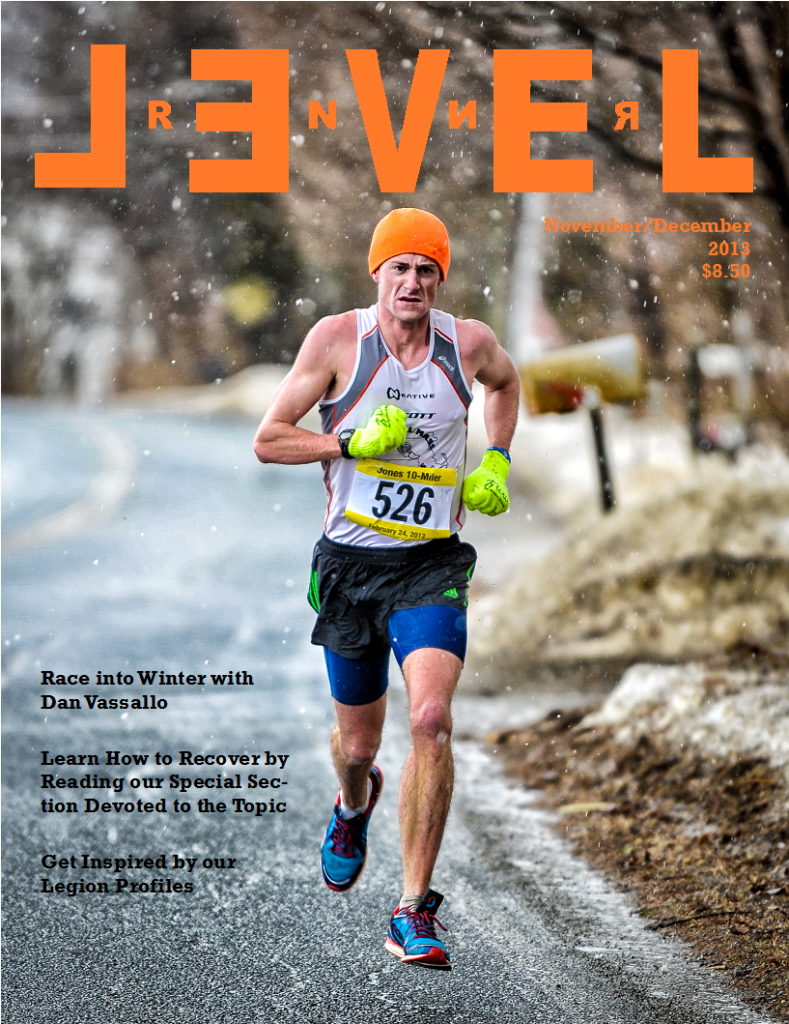 A native of Wilmington, MA and a graduate of Colby College, Dan Vassallo now lives in Peabody and, more to the point, has been on an absolute tear in local running circles.  He smoked the Lone Gull 10k (4th place, 31:29, 5:04 pace) and followed that up two weeks later with an outright victory at the Nahant 30k (1:40.39, 5:24 pace).  I chatted with DV after Lone Gull and knowing that he was the course record holder at Nahant asked him his plans for the race.  His response, frankly, is the reason why he is profiled in this issue.  He said, “Let me put it to you this way: if somebody is going to take my record, they are going to have to work to get it.” That response embodies The Level’s racing philosophy.

Despite missing much of 2012 and 2013 with various injuries, the recent newlywed (he married past Legion profile runner Katrina Gravel) boasts of sneaking in a long run on his wedding day.  “I managed to run 21 miles on my wedding day because I heard that Fernando Braz ran 20 on his,” he recalls. I guess marriage has been good to him; since the spring, Vassallo has been healthy and faster than ever.  I’m not exactly sure how much “talent” Vassallo has, but the man thrives on competition.  He names Rob Gomez, Nate Krah, and the Wheeler Brothers (Nicholas and Curtis) as his favorite people to compete against.   He is a proud member of the Central Mass Striders.  He describes his club in this way: “A team with a refreshing balance between running and real life, a good sense of reality, and a Real Dan V (Verrington) who has a marathon PR exactly two seconds faster than mine.”  His thirst for competition sprinkled with a sense of team loyalty and 100 mile weeks makes Vassallo a relentlessly dedicated athlete.  One sees that  he believes in the creed of hard work when he names his running role model.  “While there are too many local runners I admire to mention,” he says, “the one I look up to the most is quintessential citizen-runner Jim Emord.”  He goes on to say, “I admire the fast runners in the 1980s who could work full-time and motivate themselves without their competitors constantly posting bulletin board material on the internet.” DV is just an olde school type of guy.

Long runs that end in tempo pace and mile repeats are among Vassallo’s favorite workouts.  He’s also fond of the Friday Night Mile (a North Shore thing). He likes to do his workouts and easier training runs on the Eastern Trail (between Biddeford and Kennebunk, ME) and Brooksby Farm in Peabody.  He names the Wilmington Half Marathon and Brendan’s Home Run 5k as his favorite races.  When not running, one can find Vassallo in front of a television watching his beloved Red Sox, eating junk food, following Jay Bilas on Twitter, hanging out at the Portuguese-American War Veterans Club (he is neither Portuguese or a war veteran, however), or working 40+ hours a week at GraVoc Associates. 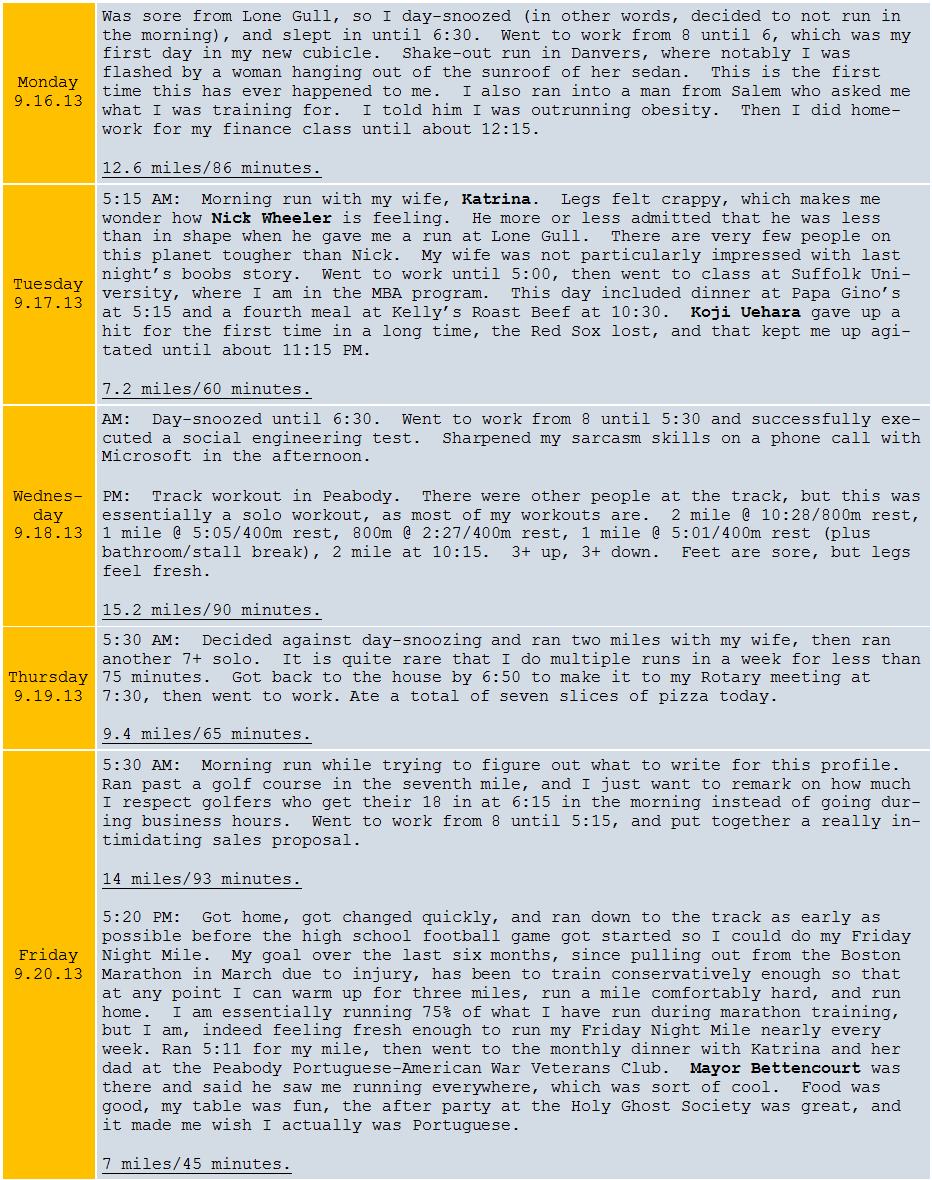 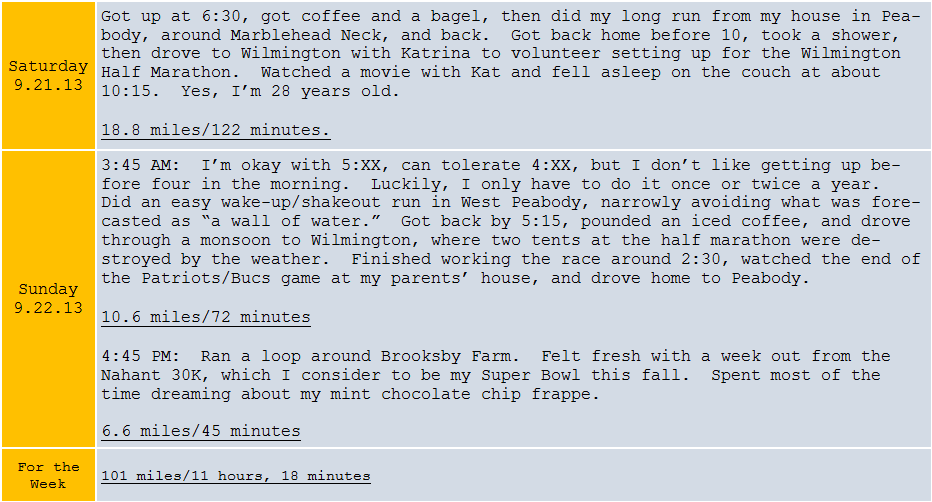 Photo of Dan by Scott Mason.