This article, written by Dr. Ian Nurse, was originally published in the Nov/Dec 2012 issue of our magazine, #11.

“Why does every athlete seem to be wearing hot pink athletic tape plastered all over their bodies in some elaborate pattern?” I first asked myself this question while watching the 2004 Olympics.  Was this just another sports fad or did these elite athletes know something that I didn’t? Well, another Olympics has come and gone and it seems like this flashy athletic accessory known as Kinesio Tape is here to stay. In fact, it’s not just the Olympians that are wearing it these days. Athletes at all levels of sport are donning the various patterns and colors that have become the staple of “K-Tape.” They aren’t just wearing it on the playing field either; I had one patient who said that the aqua blue spider web pattern that I had created on the back of her calf was the topic of conversation at the water cooler at work as she didn’t hesitate to continue wearing skirts even while wearing the tape.

So what’s this tape all about and what is it actually doing? Are people really benefitting from this stuff or is all a placebo effect? As both a practitioner using it on his own patients and a user myself, I wanted to know the answers to these questions. 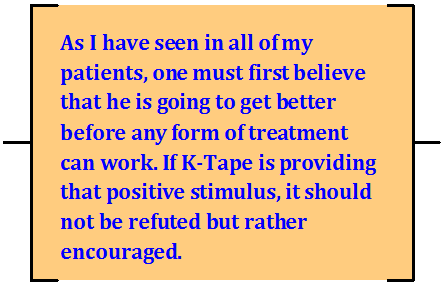 While it seems to have only hit the public eye in the last decade, Kinesio Tape has  been used since the 1970s to treat various orthopedic, neuromuscular, neurological and medical conditions. Founded by Dr. Kenzo Kase, a Japanese chiropractor and acupuncturist, K-Tape was developed to help the body heal itself. Dr. Kase felt that other athletic tapes and techniques, like conventional strapping, were too restrictive for his patients. Although standard strapping can provide support to injured muscles and joints, it also limits movement. It’s this lack of movement that, according to Dr. Kase, inhibits the healing process by restricting the flow of inflammatory fluids (also known as lymphatics) below the skin.

So how is K-Tape working other than providing a few more color options to your monolithic skin? According to its creator, K-Tape is capable of lifting the skin to provide optimal lymphatic drainage and flow. This type of fascia unloading takes some of the pressure off the tissue below the skin. By opening up these lymphatic channels, the injured tissue will be able to heal quicker as swelling is allowed to flow out, and, thus, pain is reduced. 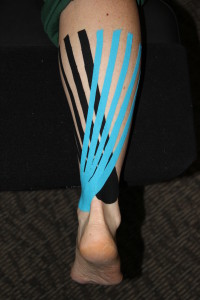 As educated members of the Level Legion, I’m sure you are all wondering, “Where’s the scientific evidence that backs up these claims?” Well, as even Dr. Kase admits, there isn’t any; at least, not yet. K-Tape has only recently, during the last five years, been researched for the first time. Thus, sufficient reports are not yet available and the scientific jury is still out. So if there isn’t any researched proof that this stuff works why do both elite athletes and weekend warriors seem to be singing its praise?

Like many treatment options, people don’t always need scientific research to know if something is effective. As endurance athletes, we become incredibly in-tuned with our bodies. Each step of an easy run becomes a scientific study analyzing whatever treatment option we have entrusted to solve our constant aches and pains. I believe people are wearing K-Tape simply because it makes them feel better. Whether it is because it adds a small amount of stability and structure to a needy muscle or joint, or because it is helping to reduce the swelling of an injury, the obsessive endurance athlete can feel those subtle changes.

In addition to the physical benefits, I would be doing the Legion an injustice if I failed to mention the possibility of a placebo effect. Are athletes feeling better while wearing K-Tape simply because they have been told it will work, and, therefore, believe that it will? As we can all attest, the placebo effect can be an incredibly powerful tool in the body’s role as healer. As I have seen in all of my patients, one must first believe that he is going to get better before any form of treatment can work. If K-Tape is providing that positive stimulus, it should not be refuted but rather encouraged.

In the end, despite our research, we are still left wondering, “What’s the bottom line? Does this stuff work or not?” As much as I would love to give you cold, hard facts that it does work, I cannot. What I can tell you is that K-Tape is definitely worth a try. At the sake of losing a few leg hairs and the cost of a visit to your favorite PT, chiropractor, or massage therapist, it is a treatment option that is worthy of your own scientific experimenting. After all, we are all an experiment of one in terms of both our training and our treatment.

Ian Nurse is an avid member of the Boston running community having competed in hundreds of road races within the New England area. Ian is a licensed chiropractor and a certified provider of Active Release Technique (A.R.T.) and Graston Technique at his Boston practice, Wellness in Motion.