Dr. Ian Nurse is Level Renner’s resident chiropractor. In this article, which originally appeared in our Jan/Feb 2013 issue, he tackles the topic of IT Band Syndrome.

Over the last few months, my injury prevention columns in Level Renner have focused on two areas: the actual injury process that takes place within the body, and two specific treatment options, Graston Technique and Active Release Technique (A.R.T.), that have demonstrated positive outcomes for endurance athletes. With this foundation laid, I will now explore common running related injuries in attempt to inform the Legion of the following: 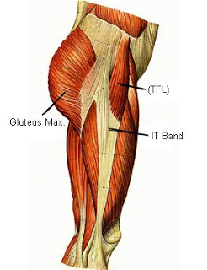 1. Why the injury typically occurs

2. What are some of the signs and symptoms

3. How it can be avoided in the first place

4. Treatments that offer the best results

Probably the most common running related injury, iliotibial band syndrome (ITBS) is a stubborn overuse injury that takes a bit of detective work to solve and treat. Ask most runners if they have ever fallen victim to ITBS and you most likely will get a resounding “Yes!” However, the reason why so many are affected is not because all runners make the same sort of training errors, or have the same muscle imbalances. Rather, the reason lies in that there are so many different factors that can cause it. While the IT band is the source of pain, it is rarely the actual problem.

Why runners are affected? ITBS is a common knee injury often found in those who participate in activities that involve repetitive flexion (knee bends) and extension (knee straightens out). Therefore sports like running, cycling, and hiking are prime candidates for ITBS.

What exactly is the ITB? When most people think of running related injuries, they think of injured muscles or cartilage. The ITB is neither. Instead, it is a fibrous band of tissue that travels from the outside of the hip, thigh, and knee, and inserts below the knee on a bump on the lower leg bone. The gluteus maximus and medius (buttocks muscle) and tensor fascia lata (TFL) (outside of the pelvis muscle) attach to the back and front of the top of the ITB, respectively. When all is working properly, the gluteus maximus and TFL contract and increase tension on the ITB, aiding in stabilization of the hip and knee joint as one’s foot strikes the ground.

What causes the ITB to be a problem?   This is an important distinction to make. As I have stated earlier, the ITB may cause the pain, but it rarely is the problem. Something else in the body isn’t working properly and as a result the ITB tightens and creates that compressive and painful force on the outside of the knee. This is why one must become a detective. Below are some examples of common dysfunctions leading to ITBS.

1. ITBS can be a result of impaired function (weakness or inhibition) of the hip muscles. When these muscles do not function properly throughout the running cycle, there is a decreased ability to stabilize the pelvis and control femoral abduction (lateral motion of leg). The TFL must contract harder and for a longer period of time, thereby stressing the ITB. As a result, the ITB is overworked and becomes irritated.

2. Another area to assess in regard to ITB problem is hamstring function. The hamstring is a knee stabilizer. A weak hamstring leads to an overworked ITB. Many factors lead to hamstring weakness. One of the most common reasons is tension on the sciatic nerve (big nerve with branches coursing from the low back, through the buttocks, down the back of the legs to the toes). When the sciatic nerve is trapped, the hamstrings will not function optimally.

3. Other biomechanical abnormalities that may lead to ITB problems include excessive pronation (rolling in) of the foot, muscle tightness, or fascial adhesion.

4. Various training factors related to this injury include excessive running in the same direction on a track or a banked road, greater-than-normal weekly mileage, and downhill running.

Thankfully, ITBS is a very treatable injury if the underlying cause of the injury is established. For this reason, it is imperative to seek professional advice when it comes to the treatment of this injury. While self-treatment such as foam rolling, stretching, and strengthening exercises such as the Myrtle routine can help, unless you are addressing the true cause, one might be barking up the wrong tree. A.R.T. and Graston Technique practitioners, such as physical therapists and chiropractors, are great options for treatment. They are trained to not only make those biomechanical assessments but use two of the best treatment options to relieve the tension within the ITB and related tissues.

While stubborn and frustrating, ITBS does not mean the end of one’s running season. With proper treatment and strict compliance to strengthening and stretching exercises, that painful stabbing can disappear as quickly as it seemed to appear.

Ian Nurse is an avid member of the Boston running community having competed in hundreds of road races within the New England area. Ian is a licensed chiropractor and a certified provider of Active Release Technique (A.R.T.) and Graston Technique at his Boston practice, Wellness in Motion.