Ashe had a few steps on his formidable competition late in the race (Sança in the middle and Serafini on the right). Courtesy of Scott Mason Photo.

New name, same classic February grind. Eric Ashe and Ruben Sança both made the 5 College Realtors 10 Miler the show to see on Sunday. If you recall in 2014 (when it was still the Jones 10 Miler), it was a very close and exciting race that Ashe won in 50:43 followed by Sança in 50:50 and Vassallo in 51:29. This year both Sança and Ashe ran 50:34, with Ashe somehow pulling out the win. Ashe more specifically ran a 50:34.4 to Sança’s 50:34.8. Both ran faster than last year, and that’s with tougher conditions. Per Sança, the “course was a bit more beat up” and offered some slush to contend with. Because hills just aren’t tough enough, right? But that’s winter in New England. Embrace it and thrive in it or fear it and hibernate until spring.

Louis Serafini ran a great race, only coming in 5 seconds behind the winner (50:39), and still only finished 3rd. The top six all finished within 54 seconds of each other: Matt Pelletier 4th in 51:23, Dan Vassallo 5th in 52:15, Eric Macknight 6th in 52:28. After that things started spacing out a little, but the big boys came out to play. Even the top masters runner, Chris Magill, ran a heck of a race. Chris came in 11th overall with his 54:10.

The top three were close throughout, according to Ashe: “Lou led the first 3, I led the next 3, Ruben the next 3, and then I led the last mile with a crazy battle over last quarter mile with Ruben. I haven’t pushed that hard at the end of a race in a while and I need to learn to to do it when I am not going for the win.”

From Ruben’s perspective, “We really didn’t attack it until last 300m or so.” Despite not really attacking until less than a quarter to go, they still ran a 4:51.2 (per Ruben’s watch) for that last uphill mile.

“I pushed the downhills throughout, trying to pull away but it never really happened,” said the Olympic Trials qualifier Ashe. Eric might not have gotten that separation he wanted, but he had the speed at the end to get his second consecutive win in Amherst.

The women’s race was also a nail biter, especially compared to 2014 when Megan Hogan ran away with it in 55:28, but in this case it was two teammates battling it out. GBTC’s Laura Paulsen ran a 59:35 to edge out Kerri Leonhardt’s 59:41. The pair finished 69 and 70 overall, respectively. The GBTC took the first two spots en route to winning the team title. The top four women overall came in within 50 seconds of each other, with Alexandra Varanka (60:07) and Laura Hagley (60:24) taking 3rd and 4th, respectively.

Paulsen out front, with her teammate Leonhardt not too far behind. Courtesy of Scott Mason Photo.

Ashe and Mish paced the BAA to the team win and Whirlaway found themselves right back in the mix in 2015 by coming in just ahead of CMS for second. It was interesting to see that two of the BAA’s top five were masters runners, while CMS also had one masters runner score. Whirlaway, which has a reputation for being a masters heavy team, had no masters scoring for their open squad. Getting younger talent on board is essential to a team’s long term success. Behind the near-winning performance of Sança, Jose Ortiz crushed it and got his first ever Grand Prix top ten finish (10th in 53:52), followed by a resurgent Pat Ard (56:02) and the newly acquired Alex Hall (57:15).

Women’s results: GBTC was pretty dominant, going 1-2-5 with Paulsen, Leonhardt and Elizabeth Ryan (respectively). The trio built up a cushion of over four minutes better than second place Millennium Running, which is not an easy thing to do. As deep as the Millennium squad is, you have to wonder how much the absence of Denise Sandahl hurt. It wouldn’t have necessarily gotten them the win, but it would’ve made it much closer. Millennium in turn had nearly an eight minute cumulative advantage of the 3rd place Western Mass Distance Project.

Things got a little tighter after that, as Whirlaway, led by Amy Bernard, were quite close to the WMDP ladies. Christin Doneski was the top masters runner in 64:15, finishing an impressive 17th overall and helping push Whirlaway to 4th place. The Whirlaway ladies had the pack mentality going as they all came in within a span of 17 seconds.

In 5th place was the new Craft Concept Racing team, which is a welcome addition to the competitive mix on the women’s side for 2015. The trio of Meagan Nedlo (61:42), Katrina Vassallo (66:24) and Sarah Bard (67:05) ran well in their first foray into the Grand Prix circuit as a team and should be in the mix all year. We’ll have to see if they have the depth to continuously compete in all the distances, as that is a problem for most new teams.

The next race on the circuit is the New Bedford Half Marathon on March 15th. The front runners have established themselves, but it was still close up front. It’ll be interesting to see what, if anything, changes in a couple of weeks. 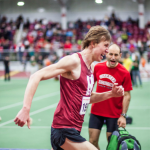 Korolev Leads US to Gold at PanAM XC