The 2015 edition of the New Hampshire Grand Prix got off to a hot start in not so hot weather conditions at the Lebanon Shamrock Shuffle 5k this past Saturday. With three new teams joining the series, there are some new faces, new uniforms, and added competition on the line for this year’s campaign. A warm welcome to Acidotic Racing, Six03 Endurance, and Millennium Running (which is comprised of both the social club and the elite team in this series).

The shuffle in the Upper Valley was lead by Lebanon High School distance star and 2014 NH DII XC runner up Josh Fontaine, who won the event for the 2nd year in a row in a time of 16:17. New Whirlaway racing team member and defending NHGP Men’s Open Champion Alex Hall crossed the line 2nd, just 10 seconds behind Fontaine while Six03 Endurance and former BU athlete Colin Lee took the bronze in 16:54.

With the late scratch of White Mountain Miler (and proud LVL Legion member) Leslie O’Dell, the women’s field was left wide open for UVRC’s Lorna Young to take the easy win in 18:09. Six03 top female and UNH distance star Lucy Garfield followed up with the silver medal in 18:37 while her college teammate Meagan Boucher grabbed 3rd, crossing the line in 19:05.

The Upper Valley Running Club proved to be the dominant team on the day as they unofficially tied the NHGP record for most team points scored by a club in one race. The 82 UVRC Wooly Syrup Chuggers who toed the line collectively brought home 230 points with the defending team champions Greater Derry Track Club a distant 2nd, scoring 128. GDTC has got their work cut out for them if they want to hoist the trophy for the fourth straight year!

The next event on the line for the NH road series is the Nashua Soup Kitchen 5k on April 12th. 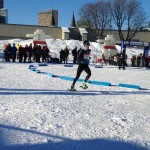