The world snowshoe championships were held on January 31st in Quebec, which seems odd when you consider that the ultimate championship race is going on just as we were starting up our competitive snowshoe season at home. In that regard, it’s fitting then that we’re publishing the story of this event after the conclusion of the snowshoe racing season here.

Abbey Wood, Kristina Folcik-Welts, Amber Ferreira, Nacho Hernando and Jason Ayr were a few of the locals who made the trip, although it’s funny referring to Nacho as a local here because he was part of the Spanish national team. The three ladies were all part of Team USA, and Jason was just respecting the process in the snow north of the border. [results here]

Abbey: I was expecting the course to be similar to the national champs, which was half on groomed trails and half on hard-packed single-track. It wasn’t! It was 4 loops, mostly single-track with soft, sugary snow. There were several steep downhills (which I think might be ledges in the summer) and a couple steep uphills with one long, gradual climb. The course was four-2.5km loops which wound around the carnival grounds, up the streets of town past the citadel and up along the plains of Abraham overlooking the Saint Lawrence River. There was one corner of the course which made me laugh every loop as it was about 5 feet from the side of a major drop (maybe 200′) down to the river with 1 little tiny bush part way down to catch your fall. I’m still not convinced Chris Dunn had nothing to do with the course design!

Amber: It was sooooo hard and deep snow and lots of huge hills awesome!

Kristina: The course suited nobody’s strengths so it leveled the playing field. The course was wacky. They dumped snow on the roads! The roads were part of the course and the rest was a field that had just a small trench stomped out and there were rocks. They plowed the roads after the race. It was crazy!

Nacho: Well the race was by far the hardest race I have ever raced by far, since the entire course was on powder and up and down all the time. The course was pretty cool since we ran part of the race on the streets of Quebec. Snow conditions were bad because after the first lap all the snow got broke then it felt that you were running in sand, I couldn’t get any traction.

Of course weather is a huge factor in races, especially when you’re in the snow in the dead of winter. Not surprisingly, it was cold there. Windy, too. According to Amber, it was “dangerously cold”, possibly near -16 degrees (probably with the wind chill). Although Abbey seemed to think it helped her: “it seems like in every race I do, the worse the weather the higher I place.”

Amber: “The competition this year was fierce! The girl that passed me at the end was the Spanish national 10k champ.” Amber, the US National Champion in 2014, was 4th in 1:00:36. The winning time was 57:28 by Sarah Bergeron-Larouche (Canada).

Abbey: “The Women’s race started one minute after the men’s and wasn’t a very large race. When the men took off I think there were only about 50 of us still standing on the line, which actually made me feel more nervous (smaller race makes it easier to get last!). Knowing the course and how difficult it was going to be to pass I went out hard at the start, about 15th or so. We caught the men within the first half mile and our pace slowed considerably, almost to a walk. I hated to think I had traveled all the way up there to walk, so I got a little aggressive at that point and hopped outside the track and just started passing. I moved up 8th place quickly and my place didn’t change after that. The first 2 laps were pretty much spent looking for passing zones to get around the men and get into a good position. The last 2 laps were spent trying not to bonk!” Abbey ran 1:03:43 and was the second US woman to finish.

Kristina: “For being so out of shape with speed I was thrilled to finish tenth!!! I needed 20 more miles!!!!   It was incredible to run with so many talented people! I loved being a part of a team, it was cool to feel like we were working together instead of racing each other!” Kristina was 10th in 1:06:29.

Nacho: “The top 30 guys in this race were really prepare for the event and in really strong shape, just ike I was. My goal was to beat Roberto the 2014 spanish champion of Spain and also be on the top 10, which i did it.” Nacho was 10th overall in 49:56 and the top Spanish runner. That meant that he beat Roberto Ruiz Revuelta, the reigning Spanish national champion.

Abbey: “Overall it was a really awesome experience. Sam and Ryan Welts were sprinting around the course the entire time, cheering the team on, and my parents were running around cheering too!! The course had tons of spectators along it shouting “Go US!” and “Go America!” I couldn’t help smiling for most of the race as I was just so pumped to be out there! My team jersey had pockets in the back which ended up filling with snow and bouncing around the whole race which was a little frustrating, but really just kind of funny.. I’m so glad I could be a part of it all, and I’m really hoping I can make it to another world champs sometime soon!”

Steph Wilson was also running all over the course tracking Jason Ayr, and she got some actions shots of Jason as he fought his way to a 16th place finish (4th American) in 52:43. Not too shabby for the lone wolf who wasn’t actually racing as part of Team USA. This shot here shows just how much he had to fight: 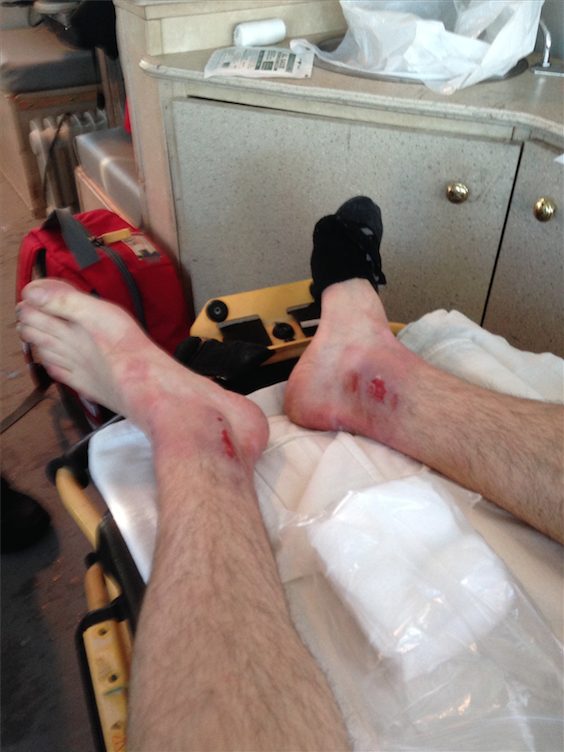 I’ve never seen ankles that bad from snowshoeing. You’re going to clip yourself occasionally, especially in sugary single track conditions. It really happens when you get tired and struggle to hold form. That must’ve been extremely painful for him to compete with. Here’s a gallery with the rest of Steph’s shots: 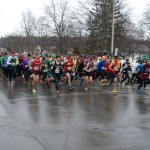 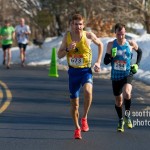