What Kind of Runner are You?

The hits just keep on coming from Dan Dipiro and his shodfoot running blog. There are many different types of runners and this might help you figure out what bucket you’re in. We all can’t be great runners now, so let’s try to be honest.

Seeing one runner doesn’t mean you’ve seen them all. There are all sorts of runners out there — more than one list could ever represent. But here are descriptions of some of the more interesting types of runners I’ve bumped into over the years.

You do one or two marathons per year, every year. You train with like-minded friends, and have a whole social life and lifelong fitness program built around serial marathoning.

Between marathons, you throw in a few 5Ks and 10Ks, but you most value the number of “Bostons” or “New Yorks” or “[insert your favorite marathon here]s” you’ve run, and your total number of marathons completed.

You also take pride in coming close to, or eclipsing, the 3-hour mark [or 3:30, or 4:00…]. As the years roll along, you grow bored with serial marathoning and try ultras or triathlons or both.

You have an under-voice that speaks as follows: “Oh yeah, world? You think marathoners are animals? Well, I’m an ultrarunner, and I think marathons are baby shit.

“I just got up the other day and thought, ‘I’m bored. I think I’ll run a marathon.’ And I did. I found this nice little point-to-point marathon, drove out there, ran it, and came in ninth overall and first in my age group.

You know what I did then? I turned around and ran the 26.2 miles back to my car. Who’s the animal now? Ha!”

Marathon, marathon, marathon…you’re sick of everyone around you who’s run a marathon and has that “26.2” sticker on the back of their car. So you decide to run one for yourself.

You get a training plan from the internet. You go to a running store, have a long conversation with an articulate, knowledgeable little dude, and you buy a couple hundred bucks worth of stuff.

A few years pass and you gain a few pounds…maybe forty. Now you add to the above response, “I really should get back to it.”

Training and racing is your whole life. You train every day and race every weekend at any and all distances. You love to race, and you know you’d perform better if you didn’t race so often, but you can’t stop yourself.

You might race two 5Ks on Saturday and a marathon on Sunday. You’re not a “Great Distance Runner” (see description below), but you’re not slow either. Every once in a while, you win a local 5K fundraiser.

You are nearly always somewhat injured. You make a living at something or other; it doesn’t matter. You have no spouse or kids. You have running. You live with your elderly parents, or a generous sibling, or over your cousin’s garage.

You run only in races, and you never train. You are not fast, but you don’t care. You just love being in races.

At home, you have a walk-in closet devoted to your collection of race shirts. It’s divided into sections: long-sleeve and short, cotton and tek-wick. When friends come by for drinks, you show them your closet.

REACH THE BEACH, BABY! WOOHOO! [Or insert your favorite two-van, 12-person, 200+ mile relay running experience.] The Reach the Beach Relay is your bliss! And it’s what makes you a runner.

You love the intense group experience, the history shared by team members, and decorating the vans. Over the years, you’ve seen injuries, affairs, divorces, skinny-dipping, middle-of-the-night roadside arguments, and illnesses. And you’ve made such good friends!

You wear your Reach the Beach jacket, shirt, or running hat anytime you’re around athletic people, and you call yourself a runner. Actually, though, if you think about it, you…well…um…don’t really…technically…exactly…actually run all that much.

In fact, you typically run just a few times before the big race, then you race, and then you pack it in for the year. And it’s getting harder and harder to do this as you grow older.

At road races, before the start, you are the person most likely to go around telling everyone that you are injured, or that you’ve been sick, and that there’s no way you are going to race well today.

To you, having everyone hear this is a great comfort. If you run poorly, everyone will have a plausible reason for it (other than, “he/she isn’t as fast as I thought”). And if you run well, everyone will think you’re a beast for having done so under such trying circumstances!

When managing expectations doesn’t leave you feeling okay after a race, you like to pull this card out of your back pocket: “I was pretty tired from the race I ran earlier this morning.”

When you are disappointed with your running performance, you try to improve by doing extra sets of bench presses, military presses, and curls. You firmly believe that that which does not kill you will make you stronger, and that pain is weakness leaving the body. Semper fi, man. Semper fi.

I know you exist, because I have seen your “color runs” advertised online. But I have never met you. If our paths ever cross, I think I will know you.

You took up road racing to lose weight, but it wasn’t working. You were actually gaining weight. You weren’t sure why, until a running friend helped you crunch some of your racing stats. Turns out, your average 5K time was 49:03:01, and your average time spent in the food tent after races was 55:34:22. Aha!

“Competitive” is a dirty word to you. It suggests “shallow” and “immature.” You would not go anywhere near a road race — especially not one of those big party races they hold nowadays, with beer served in the morning, and all of those…what would you call them? …runners.

You are wiser than all of that, more subtle. You run for the “now” — for all of those wonderful moments you discover on every journey.

The one thing that bothers you? Every once in a while, ego infects your running and takes you out of your here and now.

You’ll be running, and you’ll begin to wonder how fast you might be if you were to ever race. The thought of this makes you speed up, right then and there — a sort of spontaneous testing of the race-training waters.

Then you feel a horrible, desperate pain, and you become afraid. You slow down immediately and return to your usual, mellow, meditative pace. Then you become frustrated, because you know that some would mistakenly interpret this as your not being able to handle the pain of hard running.

You’re so dedicated to running, yet you receive no recognition for being a real runner, just because you’re not a shallow, competitive jerk. It’s not fair.

But then you catch yourself and see where your mind has gone. You detach — let go. You get back to your space, your center, those moments, and the sublime nothingness that contains them.

You freaking love to compete. And you love crushing the competition. You ran for your high school and college, and you’ve kept training and become even faster since. You train knowledgeably and compete hard, every year, from early spring till late fall, at all sorts of distances.

Years and years of experience and training are now paying off in a big way. You train and race at speeds that are unimaginable for 99% of people who call themselves “runner.”

You’ve done a few marathons (in times that most runners would want to trumpet across the lands), and they were good experiences. But your favorite distance is  ___ [insert either 5K, 5 miles, 10K, 15K, 10 miles, or 1/2 marathon]. That’s where you really kick ass; that’s your favorite distance.

You belong to an exclusive running club, and your closest friends are fast runners. You’ve known plenty who’ve made it to an Olympic trials event, and you’ve crossed paths with several Olympians over the years.

Novices who toss the term “elite” around toss it your way all the time. In your circles, though, “elite” means what it means, and you know you’re not quite that. But you’re happy with what you are. You love this sport. And you’re pretty damned good at it.

You used to drink a lot. A lot. You no longer drink at all. You have no license. You ride your bike to road races. Sometimes these races are 20 or 30 miles from your home. You have become very fit. You are not fast, but not slow either. You race your best when, instead of riding your bike to a race, you catch a ride with another runner you know. He has a license.

You haven’t been training and racing for long, but you love it, and you read about it constantly. Then you go into the world and give advice to every runner you meet, and even some non-runners who you think should be runners.

You recommend everything from shoes, to winter wear, to workouts, to races, and even types of racing that you think people should be doing.You’re in the habit of giving unsolicited advice to people who are faster and more accomplished runners than you are, and this sometimes rubs people the wrong way. You mean no harm or disrespect! You just love the sport. And want to bond with runners. And share all the good stuff you know.

If, however, you ever found yourself standing in a bar next to, say, Ben True and Sam Chelanga, you’d probably recommend a couple of your favorite workouts and tell them how their feet should be striking the ground. So maybe you do have a problem.

You have fallen in love with running all over again. Your dedication to training and racing has suddenly, inexplicably skyrocketed. (…the rocket penetrating the receptive, moist clouds above, over and over….)

You regularly drive off for long training runs — which you say you do either “alone” or “with running friends” —  and you’ve become fond of far-away “destination races.” You claim to be in need of “me time.”

Others often first identify you by online race results distributed by the club secretary. The discovery may go something like this:

“Hey, over the last three weeks, Gerry’s wife and Susan’s husband have both run in the same three races. And those races were in Oshkosh, Chattanooga, and Key West. What are the odds? I think I know a couple of people who should buy lottery tickets this week…hey…wait a minute….”

You don’t run. But you know a lot of runners. So many that you are pretty much a runner yourself, except for the running part.

Once, while out to dinner with friends, you found yourself sitting across the table from some big-shot runner or other. Well, you showed him that you’re perfectly comfortable with runners. The two of you talked about running the whole night!

Actually, the runner didn’t speak at all. You talked the whole time about all the runners you know from the gym, and how accomplished they are (they do marathons), and how this runner you were speaking to just had to meet all of your running friends, and that you would arrange it.

Ever since that evening, Meb has avoided you.

Articles, Guest Post What Kind of Runner are You?
« Previous Story 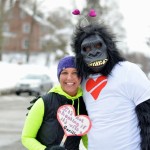 Bridget’s Fighting Through the Winter