Part Two of following the Legion in their preparation for the Boston Marathon dealt with their training in general. Part Three now looks to the cornerstone of marathon training – the long run or the mid-build up race. Many runners choose to ‘check in’ on their fitness by simulating what they are going to do on Marathon Monday either by way of a planned long run or through a shorter distance race. This way they can practice their preparation, get in the marathon mindset and see if any adjustments need to be made in the final weeks. Now, in their words….

I’ve been loosely following the Hansons’ training method this winter, so my long runs are 16 miles, as opposed to the more common 20 or 22. Easy, right? But even that “16” on my calendar looked a little daunting this past weekend, as I was still recovering from a weeklong bout with flu, which really messed with my lungs. I’ve had exercise-induced asthma since having pneumonia several years back, and basically my lungs react badly to a lot of situations: cold, wind, humidity, smoke and overexertion, for example. Combine a few of those (like racing in the cold) and I sometimes really struggle with my breathing. I have learned to breathe shallowly and rapidly when I’m running, since deep breaths can trigger coughing. I have an inhaler that I often use before racing, and I run on the treadmill a lot when it’s cold. And the situation had been gradually getting better, until that flu.

Anyway, I knew I needed to do the 16, more for my mental confidence three weeks out from Boston than even for my fitness. Start cutting corners on a training plan and confidence starts to slip. And I really think marathoning is maybe 85 percent mental. So Sunday morning, it was 25 degrees but with beautiful sunshine and little wind. I decided that running for two hours in my basement would be a crime. And I ended up having a great run. And not coughing up a lung until I stopped, which tends to be the scenario for E-I asthma. It was a little different from my last long run (in fifty-degree temps in San Francisco and over the Golden Gate bridge at sunrise four weeks ago), but I’m really glad I did it.

For the last long run before a marathon, I like to “practice” as if it were race morning: get up at the same time, eat the same thing, wear the chosen shoes (and socks, etc.), start at the same time. So a little after 10 (my start this year is 10:25), after digesting my banana and oatmeal, I headed out. I often plan out my long runs in advance (I use gmaps), so I have a route and know I’m going the right distance. I had planned this one starting down a half-mile hill (to practice my patience for the downhill Boston start—always a struggle to rein it in—and also to give my lungs a chance to get warmed up). And, I threw in a road that I probably haven’t run on in 10 years, and it was a real treat, with a spectacular view of snow-capped Mount Mansfield.

I really love to explore on my runs, even if it’s just checking out a dead-end side street or revisiting somewhere I haven’t been in a while. I wore my favorite blue-and-yellow Boston Marathon jacket (which helps remind me why I’m doing this). The sun felt great, my legs felt surprisingly good and I felt pretty strong considering I was only a few days out from a week on the couch. The coughing afterwards (and a little bit during) was pretty bad, but I was psyched to notch a strong and steady 16-miler into my training log. I enjoyed the Vermont scenery, but I also envisioned parts of the Boston course as I was running, and I know this run will definitely help me run strong on April 20. I was pleased that my left foot felt fine (it sometimes swells and is painful during and after long runs), and so I think I’ve picked the right marathon shoes. I also walked about four miles later in the afternoon; walking really seems to help me with recovery. 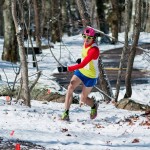 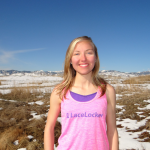 Lock up Them Laces