Dress for Success on Race Day

It’s been said that if you’re training through a race and you beat someone who’s fresh then you pretty much own said someone. But what if you’re both fresh and one of you is wearing a chicken suit? Ownership just might be attained in that situation as well. In our latest guest post from Dan Dipiro, Dan explores the various approaches to race day attire and what exactly each type means.

Our race-day clothing says a lot about who we are and how fast we are. And by deliberately controlling the messages our clothing delivers to the racers around us, we can increase our chances of having a fulfilling race experience.

In order to help you think creatively about the power of race-day clothing (both warm-up wear and race wear), I’ve put together some descriptions of a few different looks.

Note: While tats, piercings, eye-catching hairdos, and facial and body hair can also play a significant role in your pre-race appearance messaging, they are beyond the scope of this article. 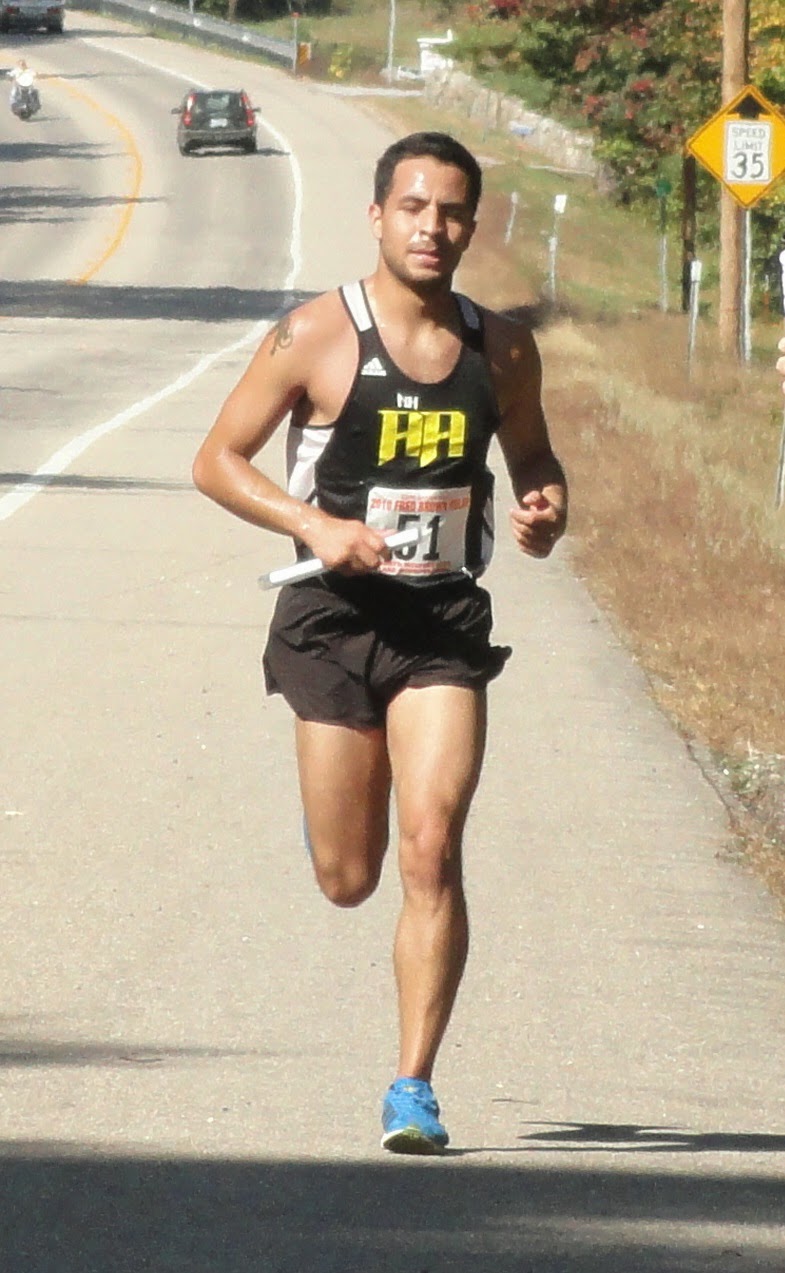 The classic Racing Beast look says “I know what I’m doing, and I’m going to whup you.”

Let’s begin with the look of your typical, veteran road racer — from the masses of club runners right up to elite runners.

This “Racing Beast Look” sends a confident, assertive message to the runners around you: “I’m at home here. I know what I’m doing. I’m going to beat you.”

This look is achieved with: a running singlet (all the beastlier if it bears the name of an exclusive running club); short, split racing shorts (some prefer Lycra); and racing flats.

This look can be souped up with accessories such as: calf or arm compression sleeves, sport glasses, and a running hat, perhaps turned, jauntily, backwards, although this can also suggest “tri guy/tri gal.”

For men, a running hat can also sometimes suggest “I don’t want you to see that I am going bald.” This is a wild-card message that can work for you or against you. Interpretations can vary, from “This guy races insecure,” to “This guy is pissed off about hair loss, and is going to kill me.”

So you’re rolling the dice with that one.

And here we have a similarly assertive message delivered with a minimalist, I’m-from-the-jungle accent.

Essentially, you execute this race-day look by toeing the line wearing nothing but racing flats and short racing shorts (men) or two small pieces of Lycra (women). No singlet. No hat. No watch. No nothin else.

The message you’re sending? “I am an uncivilized beast, and I am going to make all of us hurt.”

Oh, and the colder the weather, the more effective this message can be, although there is a point at which psychological gains are not worth the performance losses due to hypothermia. 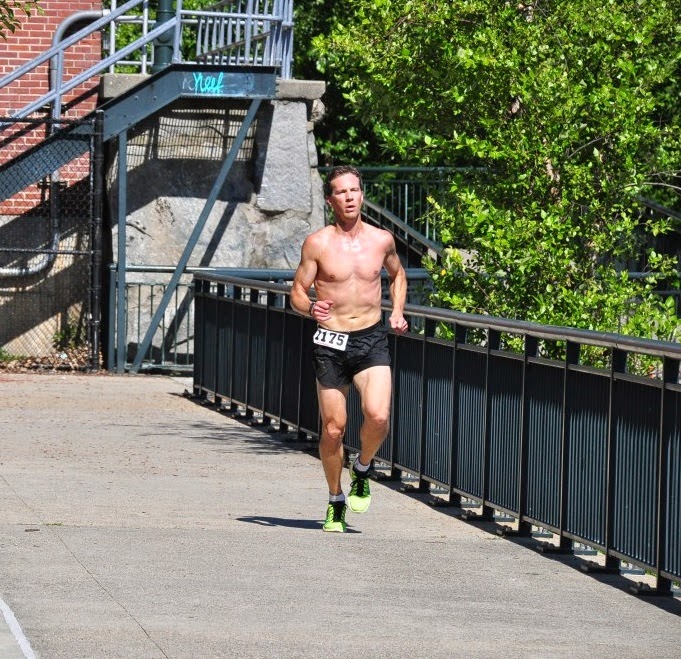 Here’s the first in a series of race-day dress approaches designed to disorient the competition with a head fake.

To enlist the psychological power of the Hobo / Racer look, you warm up in clothing that makes you look like a hobo who has never been anywhere near a road race and is undoubtedly near this one to sneak access to the post-race food.

Then, just before the gun goes off, you strip down to your racing shorts, club singlet, and the rest of your usual “Racing Beast” garb.

Having already sized you up and dismissed you as a non-threat, the competition will be hit extra hard (emotionally speaking) when their pre-race nerves are combined with the realization that a previously dismissed foe may not be dismiss-able after all. 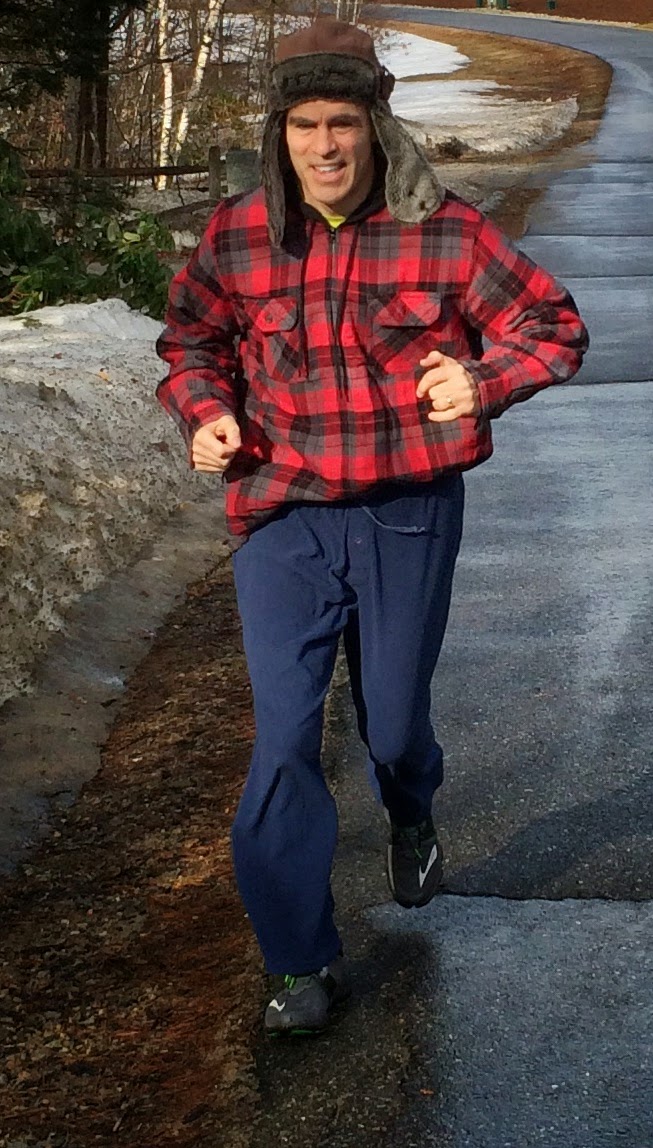 No need to worry about this guy. He’s just pretending to warm up for the race, so that he can steal a bunch of bananas and bagels from the food table when we turn our heads, right? Think again. Under those clothes, is… 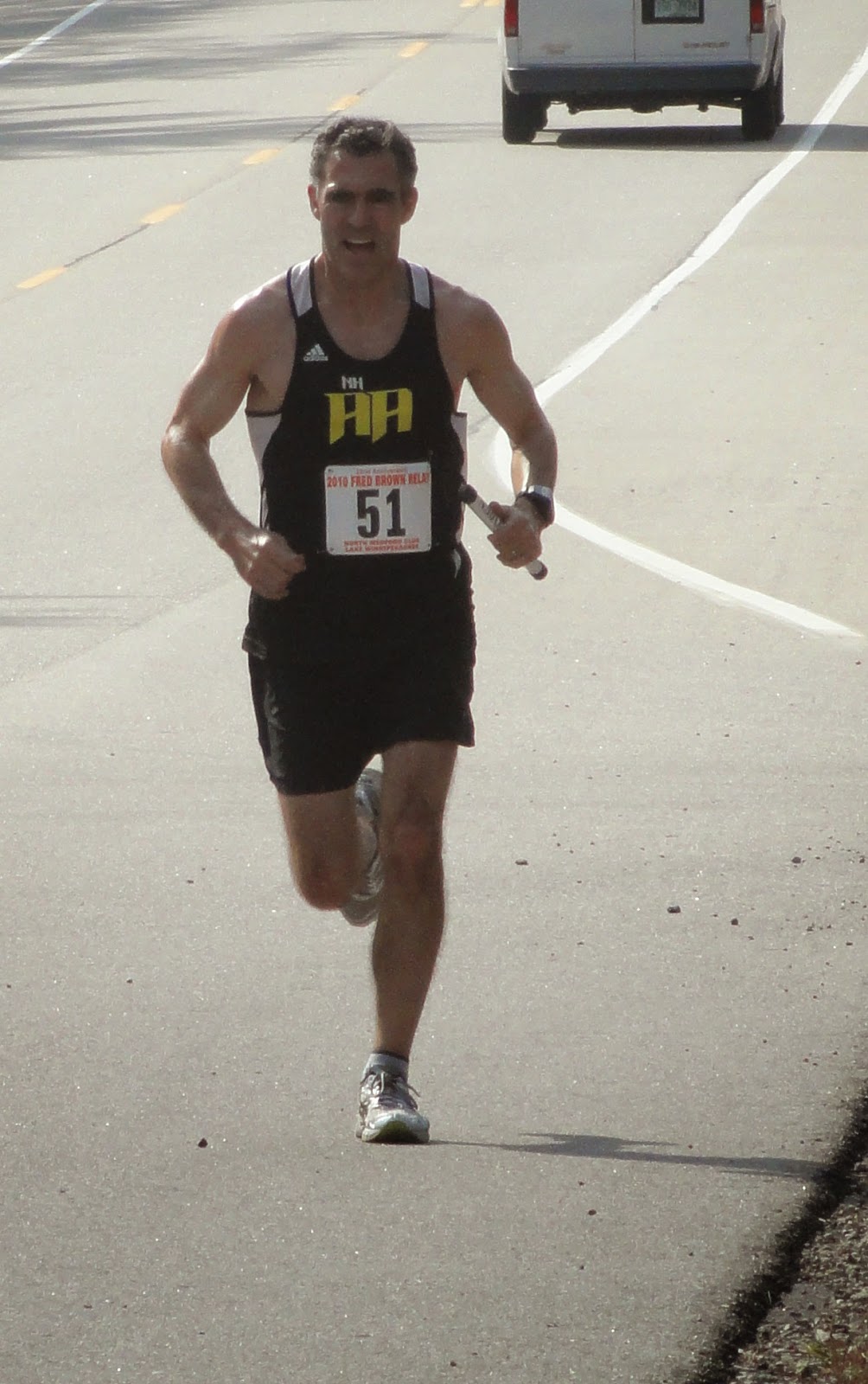 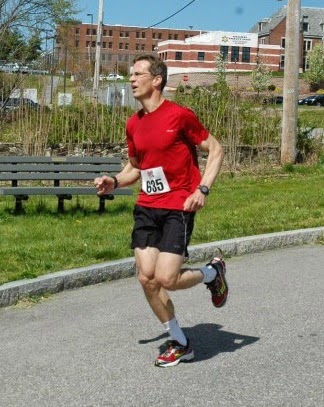 The author executing the “Nonthreatening Nonrunner” look on race day. Note the tube socks and spectacles. This dress message could have been made even more powerful with the use of black, rather than white, tube socks.

This is yet another approach designed to surprise and disorient others with your running ability after they have dismissed you as a non-threat.

This one is simple: try to dress in a way that suggests “unathletic” or “nonrunner” — perhaps a librarian who has recently established a routine of running 20 minutes per day for his or her health and is now trying a road race for the first time.

Tube socks and eyeglasses help. Do not wear short shorts, a singlet, tiny Lycra, or racing flats for this approach. Cheap workout clothes from Target are good (e.g. Champion brand).

Again, the purpose here is to send the competition over an emotional roller coaster, from…

“I don’t think Leonard the Librarian will be giving me much trouble today…heh, heh, heh.”

“Oh, man! This bookworm is flying! I’m in trouble!”

And here’s one final look meant to mislead the competition into underestimating you. This one is ideal when race-day temps are in the 40s.

What you do is you dress as if for an Antarctic expedition. Wear tights, warm-up pants, warm-up jacket, neck warmer, bulky winter hat, and ski mittens.

The experienced racers there will, of course, dismiss you as a novice. You can then knock them off their game by stripping down to shorts and a singlet just a minute or two before the start.

Or, if you can handle the heat, you can sprint off with the lead pack dressed as you are, like Sir Edmund Hillary. Throughout the race, the other leaders will be expecting you to fade, but you never will. You’ll just finish 14 pounds lighter. 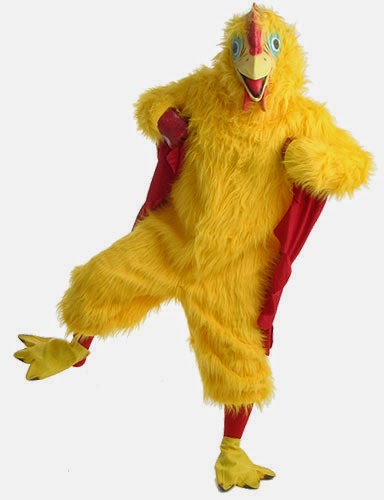 A 1:06 half-marathoner delivering one of the most aggressive clothing messages in road racing today.

The purpose of this look is to make a glorious victory all the more glorious. And it delivers one of the most aggressive clothing messages in road racing today.

What you do is you run a regular, competitive, non-themed race that does not call for a costume. But you do wear a silly costume (animal, superhero, religious figure), and you beat the pants off of everyone there.

Before the gun goes off, as you toe the line, your clothing says: “I am a horse’s ass who does not know enough to stay out of the way of real runners.”

Once the race is underway, however, and you have reached the two-mile mark with a half-mile lead, your clothing delivers a distinctly different message:

“I am not just going to beat you today. I am going to humiliate you. All of you — dressed in your club singlets and racing flats — will be beaten today by someone in a chicken suit.”

Now we shift gears, with a very different sort of clothing message, one that runners use to excuse themselves from competition and its attending stress, hard work, and pressure to perform.

This more common version of “The Silly Look” is simple. You wear a costume (perhaps with costumed friends) in order to declare yourself a “fun runner,” rather than a competitor.

In other words, this look says:

Finally, we have what is essentially “safe-haven” clothing for athletic-but-non-running folks who want to claim their rightful place in sports, just not this one.

Imagine, for example, that mom has brought Suzy to her gymnastics meet, and dad (an accomplished golfer highly respected by the guys at the club) has been railroaded into bringing Kyle to this damned 5K middle school fundraiser.

Kyle is too young to run the race alone. And none of the boy’s flaky, little friends have shown up. So dad has to run with the boy — an exercise that will have dad exhausting and embarrassing himself in front of neighbors. And shelling out 50 bucks to do it.

Dad can find some comfort, however, in dressing for golf rather than road racing. This typically involves a country-club-branded windbreaker, golf hat, golf visor, golf shirt, and/or golf shorts.

To put a fine point on his messaging, dad could even slap a golf-related bumper sticker onto the back of his shirt or jacket (e.g. “I’d rather be driving a Titleist”).

Metal golf spikes can further ensure a resounding clothes message, particularly on a paved road course. (Use caution, as your footing may be compromised.) Also, immediately after the crack of the starting pistol, it doesn’t hurt to yell, “fore!”

And, what, exactly is the safe-haven message that this particular “Other-sport Look” delivers?

“This road may be your turf. But my turf grows on the 7th at Augusta. And you don’t want to meet up with me there.”

NOTE: The “Other-sport Look” can be employed not just by golfers, but also by tennis players, polo players, stock car racers, et cetera.

So there you have it — eight different approaches to race day dress. But don’t limit yourself to just these looks. Use your imagination and all your clothing resources to deliver the race day message that works for you.

So long as you display your race number, don’t bend your timing chip, and don’t expose so much of yourself as to break the law, the sky’s the limit.

Follow Dan on the regular from his blog shodfoot running.

How to Incorporate Tune-Up Races into Your Training 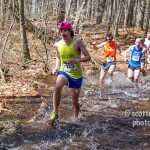 Sabotage at the Big River Half