Storytelling and the Barefoot Running Movement

Latest from Dan Dipiro is sure to spark some conversation. Here’s his take on the barefoot running fad, including how it started and what it looks now that we’ve moved on to the next one.

Are we ready to talk honestly about this yet? This little embarrassment called barefoot running? I think we might be. It’s nearly behind us, after all. And a new fad-I-mean-innovation is well on its way, right? Super-cushioned shoes!

Or maybe it’s not about being sated. Maybe it’s just that these super-cushioned shoes haven’t been served up to runners with a great story, as was barefoot running. Either way, it’s tough to be a follow-up fad. Too bad for HOKA ONE ONE.

(An aside: HOKA ONE ONE’s cause is not helped by the fact that its shoes look like platform sneakers Jodi Foster might’ve worn with bell-bottoms to portray her child-prostitute character in the ’76 cinematic classic Taxi Driver.)

So here’s what these McDougall facts tell me about McDougall. And let me know if you think I’m leaping to unsupported conclusions.

Wait. Am I trying to suggest that the very progenitor of the barefoot running movement — the movement that rocked the running industry — is not an expert runner?
The man who dissected our strides and analyzed shoe geometry so minutely? The man who pointed an accusing finger at the modern running shoe? The man who told us all to take off our shoes and retrain our feet, legs, and minds? The man who turned so many millions into barefoot believers?
That man is not even a running expert? He is not a slender, little distance runner? He is not a great university or high-school cross country or track coach? He has never even run for a high school coach? He is not even, say, an academic doing research on human bio-mechanics? Are you telling me that McDougall’s field of expertise is…um…telling stories?

Yes, telling stories. More than that, though. His expertise is telling stories brought home from foreign lands. And, in so doing, enjoying the storytelling “freedoms” that come with addressing an audience that is not, for the most part, in a position to refute what an author claims to have witnessed in those foreign lands.

That’s what the AP paid McDougall to do: bring gripping stories home from foreign lands. He is trained in that. He is a professional at exactly that.

How some elite marathoners responded to the barefoot running movement

I have never traveled to Mexico to witness, first hand, the Tarahumara Indians running barefoot on sun-baked lands that are not paved but every bit as hard as paved roads. (Are they as hard as tar roads? Or even harder, like cement roads? They must be something!)

And, get this: depending on which of the various Adios models you’re looking at (from over the last few years), the shoe has a 10 to 12 mm drop! Holy smokes! Can you believe this? I mean, did these elite marathoners have a death wish?

During But then came the barefoot running movement and all of its wisdom. In response, these elite marathoners…um…well…they, uh, kept running in the Adios. And, well, Dennis Kimetto ran his world record 2:02:57 in Berlin wearing the Adizero Adios Boost…a shoe with a 10 mm drop.

What? Did he really do that? Hadn’t he read Born to Run? Didn’t he understand shoe geometry? Didn’t he know that lots of cushioning and heel lift are the dangerous tools of the corrupt running shoe corporations?

Wait’ll you read what has happened since.

Since
Now that the barefoot movement has quieted down, and the so-called wheat has been separated from the so-called chaff, do you know what these same elite marathoners are doing?

They are still running in the Adios.

Yes. They know. But Adidas is paying them major bucks to ignore their foot health and remain corporate running shoe conspirators.

Whoops. People got hurt. And sued.

Ouch. One result of the barefoot running movement is that a whole bunch of people ran barefoot (or in those goofy Vibram FiveFingers) on hard surfaces and got hurt. What I mean is that lots of barefoot runners sustained pesky little injuries like, oh, fractured metatarsals and bruised calcaneuses (heel bones).

Of course, the other notable result of the movement is that 155,000 FiveFingers wearers got together and sued Vibram. The company had made the unfounded barefoot-running claims we’ve all heard — about reducing foot injuries and strengthening foot muscles — and had left out the part about fracturing and bruising bones. Vibram paid millions to settle the case.

Just to be clear about this: the injuries people sustained while running barefoot on paved roads were not at all McDougall’s fault.

Due to the evil cushioned running shoe with all of that unnatural heel lift (like Dennis Kimetto’s shoe), their foot muscles had atrophied and their feet had forgotten how to strike the ground naturally and properly. (Aside: I can only imagine the atrophied, unnatural mess Dennis Kimetto’s feet must be!)

You see? The injuries were the fault of the cushioned running shoes left back at home in the closet!

I told you McDougall was smart — smart enough, anyway, to know the old polemics trick of insisting on the very opposite of the truth.

Born to take a slap shot to the nuts?

The barefoot argument is something like insisting that male hockey players go onto the ice without cups so that their balls can become reacquainted with how they were naturally meant to receive a slap shot.

I would like to propose that, just as men were not born to have their testicles struck by a dense little disc of vulcanized rubber traveling at 95 miles per hour, humans were not born to run on tar or cement or any surface anywhere near as hard.

To the extent that people are “born to run,” we’re born to run on forgiving, unpaved surfaces. Human evolution has not yet caught up with our road and highway departments. It’s still lagging by a few million or so eons.

Of course, we were born to use our brains to invent useful tools, such as axes, spears, space shuttles, and running shoes. You don’t have to be brilliant to understand the truth about running shoes. As a matter of fact, I can explain it to you in simple caveman language. Here you are:

Right, right…because of the barefoot running movement, shoe companies had to open up their R&D minds and try all sorts of new shoe designs they would not have otherwise tried, and that’s a good thing!

Really? Aren’t we digging deeply for that one? Maybe to make ourselves feel better about having been duped by a fad?

What’s a product shake-up worth, if it comes with misinformation, dangerous products, and broken feet? Do product developers really need all of that in order to do their jobs well? I don’t see much good in the reactionary shoe-design nuttiness that barefoot running unleashed.

I see good in Adidas’ sanely holding the course. I see good in its keeping 23 mm of shoe under Dennis Kimetto’s heels and 13 mm under his forefeet.

Follow Dan’s blog shodfoot running to get his latest. 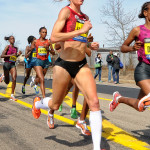 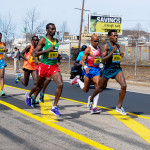