We’re only a matter of minutes now before the start of the race. Before things kick off we wanted to remind you one last time about the impressive athletes that make up the Level Legion Boston Marathon Edition:

Now just because they’re not on the squad this year doesn’t mean we’ve forgotten about them. Here are the members of our 2014 team that are back at it again for 2015:

Text the bib numbers for these athletes and any others you want to follow to 234567.

Once again, a big thank you to Tim Ritchie, an elite marathoner himself, for spearheading this whole initiative for the second year in a row. It wouldn’t have happened without him! 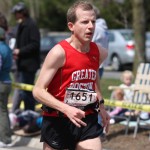