Zablocki Gets Top 20 at Boston

Long time readers might remember our bit on Zablocki’s FarmStrong training to take down Pelletier at the Vermont City Marathon. Knowing that Chris was away at med school in St. Maarten, we were surprised to see that he was back stateside to race the Boston Marathon on Monday. Knowing full well how tough of a competitor he is, we immediately added him to our tracking list and expected him to be up front and duking it out with the big names of the region.

Chris takes a different approach than guys like Sança and Jenkins, one where he races quite often. Not to say one approach is necessarily better than another, but to race at the frequency (and ferocity) that Zablocki does is a little out of the ordinary. Outside of Michael Wardian, few can relate to it. On Monday, Zablocki got the better of nearly everyone in the field as he finished 20th overall.

Here’s our Q&A with the FarmStrong islander:

Have you been racing much?

I’ve been doing a bunch of marathons, Monday’s was #7 since November. There are also lots of shorter distance running races and triathlons on the island.

I came back Saturday for a few days, since the last comprehensive test for 2nd year of school was Friday afternoon. It’s going OK, I just do practice questions and other studying all day except for training and wind up around the average score on everything. I’ll be in St. Maarten until July or August

How have you been staying FarmStrong?

I’ve mostly been trying to get Island Strong lately, my farm right now only includes a basil plant in a pot unfortunately. I wake up early so the sun doesn’t come up until I’ve already gotten halfway around the 11 mile lagoon loop. I usually do that run most days, then sometimes add a few miles at 5:00 pace on the treadmill at the gym since there is a water fountain there. Also some hill sprints, swimming, and that’s all there time for.

What was your strategy on Monday, being in a group that contained guys with international experience like Jenkins, Sanca and national 50k champ Ornelas?

I saw Sanca finished 2:19 last year at this race and so would know a good pace, so I stayed with his group until halfway when I realized we had slowed down too much since the first 10k. So then I decided it was time to start pushing it harder and was on my own the rest of the way. I don’t know why I slowed down the second half because I didn’t try at all the first half and tried very hard the second. It was a much bigger effort differential than last month in Georgia when I had no trouble negative splitting and dropping the Ethiopian guy who was with me.

Now the plan is to study for the USMLE exam in July. Then if that gets passed I am going to start clinical clerkship in Chichester in England in September. Hopefully there will be some time to train and race on the side there, they told me it was a good place to run. 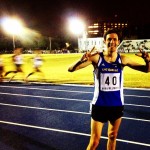 No Jet Lag For Donnelly