Continuing our coverage of the 117th Boston Marathon, here we have a couple of quick hits from a couple of the regions quicker runners.

Lauren ran dangerously close to her PR of 2:39 (set at the ’12 Trials) in dangerously miserable conditions. Although she resides in State College, PA at the moment, she does hail from a tiny town called Hopkinton, MA. You may have heard of it.

Although it wasn’t a PR, Lauren still ran under the OT ‘B’ qualifying standard of 2:43. Her pace was very even too, as you can see from the splits. Here’s some more from Lauren herself:

According to your training, what time did you think you were capable of hitting?

I was originally hoping to run under 2:40 on a good day but with the weather not being perfect decided not to focus as much on time.

You’re not far off from the A standard, and given better conditions you can make the argument that you would’ve been knocking on that door. Are you going to try to go for it?

I think I will likely not try to run the A standard as I think it would be hard for me to squeeze in another marathon before February unfortunately, and it definitely wouldn’t be a guarantee that I could run that too.

You ran a very smart, very even race. How were you able to pull that off?

I tried to run conservatively and stay with a group the first half and then push things more the second half, which I think was helpful mentally and physically for me.

I see that you’re a Hopkinton native. First time doing Boston? What does it mean to you to run a time like that on the Boston course?

Yes, i grew up in Hopkinton, and yesterday was my 4th Boston. I was excited to run one of my better times because I have struggled on that course in the past. It was so nice to run up heartbreak hill and feel good!

What was the most memorable part of the day for you?

The most memorable part of the day was Meb running by me and cheering for me and cheering back for him (and then I heard about his finish with Hilary!!). He is an amazing person and runner and I admire him so much.

Jason Ayr (WMDP) is a guy that can’t seem to catch a break. At the 2013 Boston Marathon, he ran a 2:27. That’s damn impressive, but when you consider that he had a 102 degree fever only days before then you know he was primed to run significantly faster than that. Now 2015 comes along and once again he’s in shape, but he ran into the marathon equivalent of a sharknado (wind was so bad it was ridiculous, and you can’t seem to stop no matter how terrible it gets). 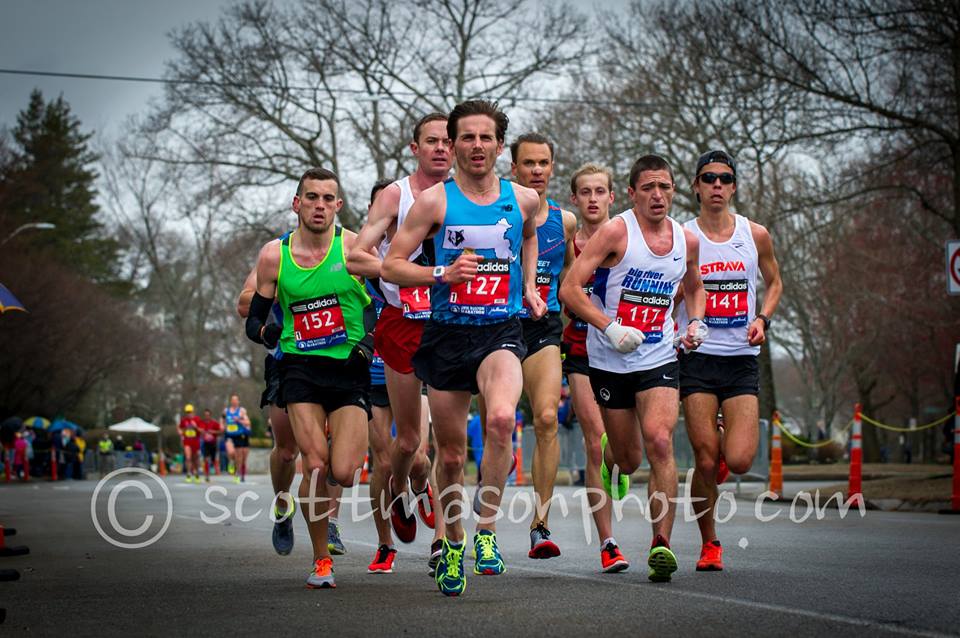 Jason broke the wind for the pack, courtesy of Scott Mason Photo.

That roughly 4 minute drop in time between the first and second half is something that I’ve seen pop up quite a bit for the small sample size I’ve checked. Pretty even, all things considered. Here’s more from Jason:

I knew I could PR, but I’m honestly scared of the distance. I run off my watch. It’s a curse. Today my watch numbers faltered at 5 miles. By 6 miles I was freaking out. By 7 I stopped looking. I decided that it was more important to challenge bodies and times are shotty. Pulled with many good dudes through Newton. Broke with a pack over Heartbreak with a low 10 min two mile follow-up (21-23). Then it was a drag race. But…had I focused on the watch – shit day.

Love the approach there, looking at it almost like a cross country race. Challenge bodies, times shoddy.