About That Boston Marathon Telecast…

Some biting commentary from Dan Dipiro on the quality of the Boston Marathon telecast in the Boston area. Unfortunately for the rest of us, Toni Reavis can’t do it all alone…

For TV stations, one great thing about covering a running event is that you don’t have to pay a whole team of expensive, first-rate sports commentators.

To cover even a big running event, such as the Boston Marathon, you’re free to hire just about anyone, put them on the air, and let them make up a bunch of shit. This is due to the fact that only .000000001% of your viewing audience knows anything about competitive running.

Covering a road race is nothing like covering, say, a pro football game. Football audiences know what they’re looking at. So you need to assemble a team of skilled sportscasters who actually know what they’re talking about and aren’t just making things up.

But running? Can I tell you a secret? I sometimes think there isn’t even much of anything to really know about running. I mean, it’s just running, right? People run. They get tired. Some get tired sooner than others. What else is there to know?

You should probably hire this Toni Reavis guy

If you’re putting together a road race TV broadcast, chances are good that this guy Toni Reavis will come poking around for a job. If there’s an association of full-time, professional road-racing TV commentators, Reavis is probably the president, vice president, secretary, the entire membership, and the only inductee into its hall of fame.

My advice? Cough up the dough to hire him, just so that you’ll have one commentator on your team who can, if necessary, come up with whatever nit-picky stuff there is to know about running.

The best thing you can say about this Reavis character is that he’s a knowledgeable, articulate, intelligent, insightful, smooth, upbeat road-race commentator with decades of experience. Oh, and he’s a seemingly nice guy. Other than that, he’s a pain in the ass.

The trouble with Reavis is that he makes the rest of your team look bad. He insists, throughout the broadcast, on interjecting… whatchamacallits… you know…accurate, relevant facts. Of course, this makes the nincompoops you’ve hired to work with him look like… nincompoops.

Kathrine “Marathon Woman” Switzer, on the other hand, is fantastic. She was the first woman to run the Boston Marathon. She does inspirational speaking, and she wrote a book called “Marathon Woman.” She also sells shirts and stuff online that say “Marathon Woman” on them.

(I would have thought that that Joan woman from Maine was the real “marathon woman,” what with her winning Olympic gold, and running marathons in her 50s as fast as Switzer has ever run them in her life. But that shows you how much I know.)

Anyway, Switzer absolutely loves the exposure (it helps to boost sales of her “Marathon Woman” shirts and visors and stuff), and she’s been commentating on the Boston Marathon for WBZ-TV forever. It’s pretty much a spring rite of passage — throw a headset on Switzer, she starts rabbiting on and on, and you know it’s springtime in Boston.

Reavis and Switzer clash in Boston

Early in the Boston Marathon, Switzer was explaining a racing tactic of one of the women. (Maybe that Deba woman? I’m not sure.)

Anyway, Switzer was saying that this particular runner always holds back for most of the race, and then takes the lead just before the finish. In other words, Switzer was making shit up, just like she was hired to do. Good doobie, right?

But then something unfortunate happened. And, don’tcha know, it was just the unfortunate sort of thing that can happen when you’re making shit up.

So Switzer played it this way: she got very excited and emphatic and said she’d never before seen anything like it from this runner.

Which was brilliant. The old “Marathon Woman” turned this sticky situation around and used it to add excitement to the tedious chore of watching people you’ve never heard of run in the rain. Perfect, right?

But what does Reavis do? He interrupts Switzer with (yup, you guessed it) one of his pain-in-the-ass, credible, road-racing facts. He says something like:

“That’s absolutely not true. In 2013, she led in New York for nearly the whole race.”

And he says it with this tone of…what would you call it? …incredulity.

Freaking Reavis. He just doesn’t get it. Right?

Reavis’ disrespectful treatment of poor Kathrine had lasting repercussions. Sometimes, you see, affordable talent is also touchy talent. And Reavis’ comment was all it took to set Switzer off.

Right after his comment, Switzer started talking with this snooty Boston Brahmin accent, and she stuck with it for the rest of the broadcast. It was like listening to Eleanor Roosevelt talk sports for hours.

Then, toward the end of the broadcast, Switzer told Reavis that he was making too big a deal out of the men’s elite racers, because they were…get this…a bunch of old, has-been marathoners who are now more into African politics than they are running. Whoa! Kathrine!

Were a similar comment ever made about pro football, baseball, or hockey players, that commentator’s chances of ever working again would be about as good as the chances of a guy wearing a red jumpsuit in an ISIS video.

But it’s just road racing. So Switzer’s saying that the BAA’s whole 2015 elite men’s field was a bunch of has-beens not worth anyone’s attention or excitement probably won’t amount to anything at all.

There are big efficiencies to be gained by filling out your road-race commentary team with people already on your payroll.

For this year’s Boston Marathon, WBZ-TV used one of its everyday anchors, Lisa Hughes, and its regular sports director Steve Burton. And it didn’t matter that Lisa and Steve don’t know much about road racing or elite runners.

Okay, Lisa wasn’t factually perfect. She said that a guy who finished in 2:21 had finished in 2:49, because she was mistakenly reading the women’s clock rather than the men’s clock.

But so what? She was in the right 2-hour neighborhood! And it’s a totally understandable mistake. They have a million clocks all over that finish area. It’s confusing.

How was she supposed to know that 2:21 is, for guys, just a few minutes from an Olympic Trials qualifying time and that 2:49 is, on the other hand, within the reach of a talented hobbyist?

And, admittedly, Steve Burton did not realize that Ethiopian distance runners, like race winner Lelisa Desisa, are actually from Ethiopia, and that Ethiopia is a place in Africa where English is not the first language.

Okay, so Steve made the mistake of starting his Desisa interview with a complex, convoluted, 21-minute question — not more than three words of which Desisa understood…two of those words being his first and last names.

But so what? Viewers got the gist of the thing. They could tell that Desisa was glad that he won, and that he was tired and wet from running in the rain. What more was there to understand about the little politician?

And Steve stayed buoyant throughout. He never lost his buoyancy. A very important thing in TV broadcasting, buoyancy is, and Steve is a buoyancy master. And did I mention he’s already on the payroll?

With the elites in, pull Reavis and cut to Heartbreak Hill

Once the ten or so real runners have finished the race, don’t pay Reavis to stick around any longer. Not that you have to tell him to leave. At this point, he will yank off his headset, hurl it from the bridge, and storm off for a drink in some VIP tent.

Once the so-called “elites” are in, the circus comes to town — that parade of clowns, tens of thousands of them, slogging along in an endless pack. Now’s the time to get an intern or some other nobody out onto Heartbreak Hill to stick a mic into those joggers’ faces!

Over the years, a few grumblers have complained about this being an ignorant and disrespectful way to treat runners who’ve trained so hard, all winter, to run Boston.

They say it’s not nice to jump out in front of runners as they climb the hill, and to make them stutter-step around you and respond to inane, phony-excited questions through their profound exhaustion.

Oh, boo hoo! It’s not like we’re jumping onto the turf at Fenway, or the ice at the Garden. It’s just a bunch of amateur joggers on a public street. Why not get ’em to talk? They all wanna be on TV anyway. Everyone does.

Finally, I’ll leave you with one last luxury of broadcasting road races on TV: you don’t have to worry about your production blunders, because no one even notices them.

This year, for its Boston coverage, WBZ was showing multiple windows during commercial breaks, so that viewers could keep an eye on both the men’s and women’s races while also learning about detergent or insurance or whatever.

With just a mile and a half to go in the women’s race, and with the top three women runners right next to one another and that American Desi woman trying to chase them down, WBZ went into a very long commercial break and eliminated the window showing the women’s race!

It was like suddenly interrupting coverage of a Patriots game during a final drive for the end zone, with two points to make up, eight yards to go, and two downs to do it in.

But do you think anyone cared or even noticed? Nah. Come on. It’s just road racing. No one actually knows what they’re looking at.

Wow…sounds like it was more painful watching inside on TV then it was standing out in the cold rain for hours. Curious as to how many other renners out there feel similarly about the quality of the coverage? 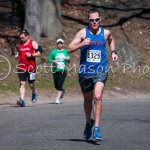 Wilson and Reiner Kept it Rolling at Doyle’s