I was standing there waiting for my team’s handoff at Exchange 26 in the early dawn on Sunday morning. Leg 26 out of the 36 stages that made up the Ragnar Cape Cod relay. Most people coming through looked like they had been running all night. No offense meant by that, it’s just the nature of the beast when it comes to these things. But then a creature burst into my field of vision, moving so damn quickly that my sleep deprived brain could barely process it.

She came tearing through the exchange and slapped the bracelet onto her waiting teammate, who took off like he was shot out of a cannon. The form was spectacular, the power and speed was obvious. They both had on Northeastern singlets so I figured they were the real deal.

Like I said, I had been sleep deprived so it took quite a few hours to connect the dots back to this tweet:

Sam Fazioli was part of that Northeastern team and he was wearing the Level colors. Gotta love it. Waiting on official results, but according to Sam there’s reason to be optimistic:

Officially 20:18:55 for @nuclubrunning at #RagnarCapeCod. Unofficial right now, but pretty sure that’s a landslide victory @levelrenner

To put it into perspective, my team took nearly 27 hours to do that same route. Those guys were absolutely flying. More on this to come, but Sam & his team definitely deserved a shout out for that. 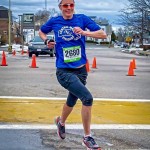