Dan Vassallo and Erica Jesseman took the titles at the Portland Sea Dogs Mother’s Day 5k this past Sunday.

From a solid write up in the Portland Press Herald:

Those paces must’ve been cruising for those two. Special shout out to Vassallo for once again wearing the Level singlet and making us look real good in the process. Interesting tidbit in the there about Dan being a former Sea Dogs intern. I wonder what recognizable names were on the roster when he was there. He might’ve been there during the Kevin Millar year(s). Cowboy up baby!

Thanks to Kevin Morris for the photo, too. It’s nothing short of spectacular.

Check out the full Press Herald write up:

*UPDATE: Dan was not there during the Millar era. We were way off on that one. Not even close. From Dan: “My season included Masterson, Reddick, Lars Anderson, post-no hitter Buchholz, and Daniel Bard among others.” Solid group of guys to watch, none the less. 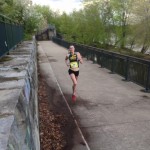