On the Scene: the 2015 Brooklyn Half Marathon

Waves crashed against the Coney Island beaches and the circus hum of amusement rides tickled the windy boardwalk edges. The crowd stood leaning in eager, sweaty anticipation as the mid-May skies rounded with potential rain. With 26,482 finishers, the Brooklyn Half Marathon was the largest half marathon in the USA this year to date and it seemed as though all of Brooklyn was out to watch it go down.

The runners in the Brooklyn Half Marathon on May 16th proved that they were strong and competitive. Tens of thousands able-bodied people crossed the finish-line in the 62 degree, 76% humidity weather but it was the performance of the top-placers that, unsurprisingly, stole the spotlight.

Leaning over the boardwalk fencing, race-goers craned their necks to catch sight of the first men flying down the boardwalk toward the tape. Negash Abebe Duki of Ethiopia and Cam Marantz of Philly, PA wrecked their way to the finish in a thrilling sprint. Duki broke the tape in 1:05:01 with Marantz a mere four seconds behind him in 1:05:05. Pulling through behind the top 2 competitors was Ayele Megersa Feisa of Ethiopia, shutting down his own clock time of 1:05:17.

It was a battle field all the way to the oceanic fairgrounds in Brooklyn and no one wanted to be left bleeding on the sidelines. The women of New York showcased their own ruthlessness, as training partners Megan Hogan and Sarah Cummings of NYAC (New York Athletic Club) duked it out for first and second place, respectively. Hogan smoked the field out with a 1:13:33 and Cummings followed through with an impressive 1:15:33. Rolanda Bell, the unattached runner you might recognize from the cover of Runner’s World ‘Runner Body’ issue and who fiercely combated her way to third place, showcased a four minute PR of 1:16:01.

On my bucket list was winning a life size check written to me…. Brooklyn Half Marathon 2015 Third place female in 1:16.01 (over a 4 minute pr)

Starting out at the Brooklyn Museum, this race takes off through the “hipster borough” of New York City: through the iconic Grand Army Plaza, alongside and through the rolling hills of Prospect Park, down the Ocean Parkway and finally onto the boardwalk of Coney Island. The Coney Island freak shows are temporarily laid to rest as the freaky runners, up before the sunrise, complete the 13.1 miles. Nicolai Naranjo, one such runner from the Western Mass Distance Project, forged through the course for a tenth place showing in 1:08:41. His workouts leading into the race, coached by Jason M. Ayr, were on point, yet he harped slightly on the Brooklyn atmosphere, “The crowds going into and coming out of [Prospect Park] were great, but in the park and from mile 7-13 there was no one out there. I don’t think Hipsters like waking up before 10:00 on a Saturday.” In preparation for the course, the top female runners purposefully amped up the endurance and speed and held back on their expectations. Hogan went into the race without a taper, her legs feeling a bit heavy. “I can’t say I expected I was going to finish first.” Hogan admitted. “You never know who is going to show up!” Although Hogan’s Brooklyn show was shy of  the Olympic Trials Marathon ‘B’ standard of 1:15:00, she had already gained ownership of it at the 2014 Hartford Marathon where she made her moves in 1:12:12. Cummings also just missed the mark, but she deservedly already had the ‘A’ Standard from the 2014 Chicago Marathon (2:34:47.)

Lots of high fives & hugs all around today. Many congrats to all 26,482 finishers, staff, vols and partners. A great day. #nyrr #airbnbbkhalf

Bell’s only race day expectation was to break the monumental 1:20 barrier, all after standing on her speedy feet for three days of expo work. (Anyone in the industry will understand the fatigue that comes with expo territory!) As Bell’s training is strongly focused on the 3000m steeplechase on the track, her speed and endurance training has dutifully paid off. Bell’s new PR put her tantalizingly close to the OTQ, but would a steepler even chase that?

As the roar of the crowd dimmed and the magical tinkling of the ferris wheel puttered out, the Nathan’s hotdogs and Brooklyn Brews consumed, runners moved onward to a well-deserved rest. But, for Megan Hogan, Rolanda Bell and Nicolai Naranjo, this half marathon was merely a stepping stone. We’ll see Hogan again at Grandma’s Half in Minnesota on June 20 and Naranjo at The Friday Night Lights 10k with the Falmouth Road Race to follow. And although there won’t be the whirling spin of amusement park rides and sandy boardwalks to beckon them to the finish-line, there will certainly be an eager, awaiting crowd.

This was Barbara’s first in what we hope to be a long line of contributions to Level Renner. Check out Barbara’s own website: The Days Between: NOT QUITE SUNDAY

Articles, Racing On the Scene: the 2015 Brooklyn Half Marathon
« Previous Story 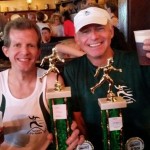