The Angry Chicken locked in on the Whirlyboy, courtesy of Krissy Kozlosky.

At the 2015 Vermont City Marathon, which doubled as the USATF-NE Grand Prix championship for the distance, there was a really close finish between E-j and Mike Cooney of Whirlaway. Since this was a Grand Prix championship, that meant that there was the whole team element that runners had to keep in mind too. Who knows, the difference between Hrynowski and Cooney could’ve been the difference in the senior team scoring.

Here’s the story from E-j’s perspective:

Late in the race I passed one of the usual Grand Prix suspects, and heard an emphatic F bomb from behind. That brought a smile to my face, and smiling late in a marathon helps you run relaxed. Shortly after that chuckle, I pulled up on Dan Verrington’s shoulder and we exchanged pleasantries. It was then that I saw a red singlet in the distance, and recognized the familiar stride. To a green-clad Angry Chicken, a red Whirlyboy singlet says “charge” like a matador’s cape. Like the bull, you’re probably not gonna win this battle…but you’re gonna give it one helluva fight before collapsing.

The lead seemed too large to close in the remaining distance, but the hamstring that was a concern in the days leading up to the race was cooperating completely. I had run a fairly conservative first half in 1:30:33 and was feeling pretty good so, with nothing to lose, the chase was on.

I felt like I was pushing harder, but my GPS didn’t reflect a significantly faster pace. At this point in the marathon, I was just looking to avoid slowing down. Mike started coming back to me, creating a positive feedback loop and before too long I had to choose between sit and kick and making my presence known. I pulled up on his shoulder, pleasantries were exchanged and he walked away from me.

In a word…dammit. I finish behind Mr Cooney all the time, I’m used to it. It was looking like the movie Groundhog Day, and I just stepped into that ice cold puddle for the millionth time. The marathon offers my only realistic chance to finish ahead of him, and he was dropping me again. I held pace, I held effort but as the course was running out he was easing away from me. Which brings us to…the kick.

I didn’t know the course, but I knew there wasn’t much left and it finished on grass. We made a couple turns, and I saw the grass and the finish line arch beyond. This is usually the point where the voice says “oh well”, but for some reason it said “get him”, then screamed “GET HIM!” I hit the gas as hard as I could and ran straight at that ugly, awful, horrible red singlet like I intended to leave footprints on the back of it.

Closing in… Courtesy of Krissy Kozlosky

After the race Scott Mason told me the announcer called out a “sprint finish” but I didn’t hear it. I was in my own incredibly small world and I didn’t hear anything. I didn’t see anything other than the singlet, and the rapidly approaching finish line mats. I was now closing hard at a significantly faster pace than Mike was running, and I knew IF I caught him I would be first to the line because of the momentum I had. I almost didn’t unlock my laser sight in time, I was practically inside that ugly, awful horrible red singlet before I veered slightly left. Fine motor skills were in short supply at that point; I’m pretty lucky I didn’t cause a collision. We were already beyond the announcer’s mat, so seconds later the race was over.

Surging Past, courtesy of Krissy Kozlosky.

It was a euphoric moment. Not because I had finished seconds ahead after running for nearly three hours, but because I answered the bell for the final round. I dug really deep, and kicked better than any of my recent 5k races. Finishing seconds ahead or seconds behind wouldn’t have changed that fact. I turned and gave Mike a genuine hug and noticed that on this side of the line, the singlet was no longer ugly or awful or horrible at all. It was just sweaty.

Runners are by nature a restless and critical lot, and to balance the yin of this strong finish I have hundreds of “oh well” yangs. Why can’t I do this at every race? Why can’t I get to that reserve, that is assuredly there on those other days? If I could answer that I would make one helluva sports psychologist, but I can’t.

After almost any race there is some regret, something that could have been done better. This is one of the few times I finished an important race without a single one. And for the entire weekend, the only real regret from is not seeing Mike after so I could buy him a beer. I owe you one good sir.

I’m not sure what I like better, the way E-j finished that marathon or the way he tells the story. What E-j didn’t include in his submission to the Level but also warrants inclusion here is the fact that he passed forty runners in the final six miles. That is how you finish a marathon! What a race by E-j. And that look on Cooney’s face…priceless.

Of the duel, Mike Cooney had this to say:

To be honest I thought I put him away before the last straightaway. I looked left and right and did not see him. I started to relax and position myself for a good finishing photo. When he passed I was shocked and somewhat amused. I can hear Coach Kazjanian’s famous words going through my head, “run hard all the way through the line”. I didn’t and just have to tip my cap to E.J. He hung in there and took my best surge. I hope he enjoys this moment, it belongs to him but it won’t be happening again anytime soon. Lesson learned.

Thanks to Krissy Kozlosky and Scott Mason Photo for the pics. We didn’t get anything because we were interviewing winner Matty P during this epic moment. If you want to see how we found out E-j had finished the race, watch the interview and you’ll see his appearance towards the end.

Congrats to both runners on running tough races in less than ideal weather. 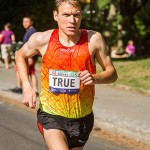