Justin Freeman and Denise Sandahl came away with wins at the Pack Monadnock 10 Miler yesterday. The challenging course was the 3rd stop in the USATF-NE mountain series, but it didn’t seem to draw on the popularity that the series has. The race unbelievably saw a drop depth of field and in numbers overall. Comparing last year’s results to this year, you can cross off a few big names right off the bat due to injury: Newbould, Johnson, Doneski, and that’s just with a quick glance.

But it’s not about who wasn’t there. What it is about is how easy Freeman and Sandahl made it look. From my spot at about 9 miles in, they flew by with what appeared to be ease. Freeman was looking to avenge a loss to Newbould on this very course from a couple of years ago, and also get in some training for the Mt Washington race. Justin ran a 1:03:36.5 and ended up with a comfortable margin over second place Kevin Gravina (1:07:39).

The top masters runner was a senior, and also incredibly fast enough to nab the final podium spot. Erik Vandendries ran 1:08:05, and beat people nearly half his age.

Denise Sandahl ended up running 1:13:59 and finishing 11th overall. Leslie O’Dell was next in 1:17:38 and she was followed directly by Sarah Bard in 1:18:08. Sandahl broke away early and was by herself for much of the race. It’s a strong performance by Denise only a couple of weeks after an illness forced her to drop out of VCM about 20 miles in.  She’s clearly over that.

A couple of minutes behind Sandahl, reigning US 50k champ Sarah Bard was giving Leslie O’Dell a run for her money. Bard is just rounding back into form after dealing with some injury issues, and she wasn’t quite able to walk down Leslie at the end. But Sarah was mainly using it as a training run and looking to get in some hill work, so that made for a good day’s work.

Karen Encarnacion was the first women’s masters runner in 1:26:57, only a couple of spots ahead of Jacqueline Shakar (top senior runner in 1:28:53).

Hopefully next year the race sees an increase in numbers and it gets more competitive. In an era of PR courses and fun runs, this is a challenging, classic course. As Denise said in her interview, it really is almost two races in one. The real fun doesn’t start until 9 miles in. The real fun is the last mile or so on The Climb.

Check out the Level Twitter feed for more race highlights. 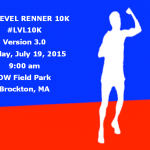 A Rebuttal to the Anti-Sit & Kick Argument