Days of the Dementors

This was written by Gary Cattarin back on June 3rd, when the weather was not exactly ideal in southern New England.

I’ve long forgotten which events occurred in which of the twelve-point-six million Harry Potter films, but I do recall many of the events themselves, notably the scene where the Dementors attack our beleaguered hero and first suck the warmth and joy from his surroundings before trying to suck the joy from his soul. Until the sun finally re-emerged around four this afternoon, I was pretty convinced that the Dementors had overtaken New England for the last few days as the mercury hit levels that brought the fleece blanket out of the bedroom closet.

Back in mid-April, I and many others expounded on the brutality of the Weather Gods on the day of the Boston Marathon; the rain, the wind, the cold, the joyless souls being hauled off the course hypothermic, the remaining souls going hypothermic post-race in the canyons of Boston’s Back Bay. It occurred to me last night, tooling across town in my eco-mobile, that the car thermometer read forty-six degrees, which was, to my recollection, the temperature for Boston. And Dearest Spouse reminded me how back then we’d thought that was a nasty day for so late in the season.

But that was April. Hello, it’s June. That month that comes in like a mink whale and goes out like an opossum, or something like that. The Dementors arrived just hours before the month rolled in, the dial dropping over twenty points in the hours after my dozen humidity-swathed mid-day Sunday miles. Now, who remembers the spell that Harry used to ward them off? (Answer: A co-worker with whom I brought up the Dementor theme, quickly reminded me: Expecto Patronum!)

It’s totally wrong to put on long sleeves, double shirts, and gloves, yes, gloves, to go for a run in June, but faced with dank windy rainy forties, I don’t want to be right. Yet though the joy may have been sucked from the atmosphere, I’m finding some of it on the road.

While quantity isn’t everything, in terms of building the base and overall fitness, it’s a lot, and the odometer keeps turning, topping a mileage milestone on that dreary first of the month, the same day my latest streak – begun entirely by accident but now happily living a life of its own – hit a hundred days. And the body – excepting the left knee which has been entirely disconnected from reality, getting no worse or better through breaks or heavy training – is holding up. A co-worker asked me today about my Achilles, and I had to ask him to repeat himself. The word Achilles simply didn’t light up the neurons, since the testy tendon itself hasn’t lit up a whit of awareness in months. In short, things are holding together despite having turned up the dial to eleven.

But while basking like I’ve rarely done in the fever of a fall target race with more-or-less unrealistic hopes (which is of course motivation, but also potentially massive disappointment, but hey, I’m a big boy, I can handle it…), quality has to join the mix. Over the last few weeks, a couple of strong tempo runs have popped up, sometimes when least expected, to keep alive that go-for-broke spark of hope. An impromptu stop for a quickie run on my way home from a business meeting turned into a half-marathon at three-hour marathon pace (and the discovery of one of the finest rail trails I’ve run, Hop River State Park Trial in Vernon, Connecticut, a must-run if you’re in the area). And yesterday, despite the Dementor’s Gloom, an ordinary outing dropped into a tempo with a pace in the sixes, piercing the aerial dreariness with the satisfaction that I’m still refusing to act my age.

Even today’s, the forecasted improvement seemed to need to fight for its right to exist, and didn’t fully prevail till late afternoon. Our reward for surviving this late-season unexpected dose of despair was a perfect evening on the trails, the air a crisp sixty, the ground surprisingly solid and dry considering the volume of rain over the last three days (testament to the drought leading up to the deluge), and the filtered woodland sun seeming far more sublime than usual; its absence having made our hearts yearn for it that much more.

Clearly the trick to surviving what the Dementors throw at you is to cast your own spell, damn the torpedoes, run on, and don’t forget a good running cap to keep the slop out of your eyes.

Follow Gary’s training, racing and any other battles vs Harry Potter characters on his blog The Second Lap. 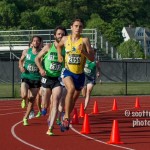