Records fall on the Rockpile

Had a fun time covering the Mt Washington Road Race on Saturday. Took a few days to get reacclimatized to life at sea level before we could get the recap out. By now you’ve seen the results and most likely all the footage on the race, so we don’t want you to start feeling mountain fatigue. We’ll keep this quick and point you to some great resources for all the race action.

Team Colorado dominated the day by taking the open men’s and women’s team titles. Behind winner Joe Gray, Team Colorado took 5 of the next 6 spots. For the ladies, winner Kim Dobson led the way as Team Colorado snapped up the first three women’s spots.

Some highlights to point out:

Joe Gray broke the American record for the course, and his time of 58:15 is second only to the overall course record of 56:41 (Jonathan Wyatt, New Zealand). From our interview with Joe, he said: “It would’ve been nice to go after the American record last year but I realized we weren’t going to get it early on so at that point it just turned into a race. This year we came through 2 & 3 miles and I realized the American record was pretty close actually so around 10k I gave it a go and just broke it by a little bit.”

Katie Misuraca, 34, of Team Gloucester ran an incredible 1:17:37 and was the 4th woman in the stacked field (43rd overall). Her Team Gloucester took third open as a team.

Simon Guttierez…is that guy lying about his age or what?! Is he really 29 instead of the 49 that he’s listed at in the race results? Simon ran 1:04:02 and finished 6th overall. Safe to say he will be rewriting the senior records in the future.

Finally, 95 year old runner George Etzweiler inspired the masses with his 3:28:41 effort. But really, time doesn’t matter there. Even including it was a force of habit. Just doing it at that age is beyond remarkable. I can’t quite comprehend it. Kudos to George! Hopefully we’ll see him to do that for years to come.

Hopefully by now you’ve seen our video, but if not here it is:

Mt Washington Road Race Super CutHighlights from the 2015 Mt. Washington Auto Road race as we followed the leaders from the lead vehicles. Includes interviews with Joseph Gray and Larisa Elaine Dannis, along with footage from the final “wall” of most of the top 70 runners. For Level Renner.

It’s footage from our journey up the mountain in the media van, with our interviews with Joe Gray and Larisa Dannis playing over it.

Also on the mountain and cranking out the footage was Jim Johnson and Mike Quintal. They provided “amazing commentary” along with putting together complete race footage in a seven part series. Clear a day on your calendar to check it out:

Dobson moving up the final wall.

O’Dell works her way past one more competitor, who makes her think…[insert caption here]

Alex McGrath had the best shades on the mountain.

As always, support your race photographers and make a purchase! These guys (and gals) do great work making us all look good. 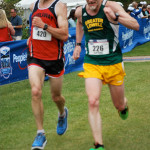 Is Your VO2 Max High Enough to Prevent Heart...