The New England edition of the Ragnar Trail Relay was held at Northfield Mountain on June 26th and 27th. Some brave souls entered as an ‘ultra’ team, meaning 4 runners would do the work of the standard 8 man team and cover 120 off road miles in roughly 24 hours. Here’s the skinny on the event from a couple of those teams:

The Ragnar Trail Relay is a great concept. Teams of 8 or 4 take turns, covering approximately 120 miles of trail in total. The course is split in to 3 different loops each with a different feel and distance. Teams of 8 have each runner run each leg for a total of 3 runs. Ultra teams each run 6 legs, getting to see each loop twice.

I’ve done several road relays and a mountain bike really before; I love the team bonding, planning, and adventure that go in to them. Covering 120 miles on trail with a team of friends sounded like a blast. Covering it with only 4 runners sounded like even more fun.

I rounded up a speedy group of fellow Pioneer Valley trail and mountain runners and our final team of 4 consisted of me, perennial mountain series and snowshoe strong man Tim Mahoney, trail runner, cyclist, triathlete, and brewer extraordinaire Donald Pacher, and top 10 ultra runner of the year Brian Rusiecki. These are all guys I am happy to consider close friends and that I looked forward to hanging out with all weekend. They can also RUN.

Our strategizing before the race mostly involved deciding who would be stuck running more legs at night and weighing the options of how many times we wanted to run (Ultra teams can run 6 individual legs or double up each time, running 2 legs at a time for a total of 3 longer runs over the day/night). We opted to double up, giving us more time in between to eat and relax.

We started at 5 PM in the last wave of runners. Tim led us off with a strong run, followed by Brian, me, and Donald. We followed this same order through the whole race. I think most of us struggled a bit in the 2nd and 3rd legs to get back in to a good groove but found our legs each time. It turns out that running, stopping cold, eating, laying down, and expecting to go hammer again is tough. We agreed that the relay format was probably one of the harder ways to cover 30 miles. You have re-establish a rhythm each time out and each time brought a unique set of challenges from changing light conditions to a slicker trail and mist at night. The only person that didn’t seem to slow down at all was Brian. We expected that. Being REALLY good at racing 100 miles means you can nail a pace and push through the challenges of fueling, stiff legs, darkness, etc.

The course was great. There’s really not much opportunity for flat running at Northfield. Anyone who’s done Dave Dunham’s races at Northfield –  the USATFNE Mt. Series race there or any of the snowshoe races – can attest to this! So, we knew we’d encounter hills. What remained to be seen was how much singletrack and “real” trail running would be involved. I was actually impressed with the mix of terrain. I expected it to be tame and mellow enough to be accessible to the teams of varying abilities – while it did utilize some of the wider xc ski trails it also had plenty of singletrack, rocks, and steep climbs and descents. Each of the 3 different loops had its own character and plenty of climbing.

The event itself was incredibly well-organized. They really have it dialed in. The course was well marked, the transition area is smooth and utilizes chip timing to let you know when your runner is getting close, there’s yoga, massages, smoothies, plenty of food, and even trail running movies playing at night by the transition area. It’s as much a camping party as it is a running event.

I have yet to see final results but we got word that we finished as the first place ultra team and third overall. If I have any gripe about the race it’s that there were no live results. I think the event is geared toward teamwork and completing the distance while having fun, but some sort of leaderboard where you could track your team’s positon within the race would have been fun!

Some other observations and notes from the weekend:

I agreed to participate in this madness completely on a whim looking for some adventure. I knew the scheduling would be tough coming off my first marathon and three mountain races — one of which being an up/down trek via Mt. Washington auto road just the week before. So, I wasn’t sure how my legs would hold up and how fast I’d be able to go. One thing for sure was that I kept an element of surprise to it all by being unaware of what Ragnar was all about and not even knowing the distance I’d be required to run. (Otherwise, I just might’ve said “screw that!”) I finally sat down the night before to skim through some of the race materials and, as ‘priority #1’, was sure to upload Justin Bieber’s “mugshot” as my profile pic at Ragnar.com. I realized several things during my recon mission: A) crap, this covers 120 miles in 24 hrs; and B) crap, I’m on an “ultra” team — meaning I’m on the hook for 30 of those miles. One of my main concerns about this weekend, aside from missing out on well-needed rest, was that I wouldn’t get in enough mileage… yiiikes was I wrong.

The course was challenging with tricky footing in places due to roots or slick downhills, and the elevation gain climbing and descending Northfield Mountain was a grueling 1,200 ft. Three loops comprised the relay, green, yellow, and red ranging from 3.5, 4.8, and 6.5 respectively. There was some debate amongst folks in terms of which was the most challenging, but I’d have to say the red loop was as it endlessly climbed for about 3 miles. This event challenged me physically and mentally, but in ways that differed in comparison to some of the more recent/crazy events I’ve completed. The lack of sleep certainly played a role, but running on trails at night wearing nothing but a head lamp (hey, it was dark!) and navigating through tricky terrain only added to the difficulty of the Ragnar experience.

The team aspect of it was great and I really got to know my teammates over the duration of the event. I give a lot of credit to our captain (Wes) for organizing the relay legs, projecting finishing times, bringing equipment, and helping to make sure we were where we needed to be. It was nice to make some new running buddies along the way, not to mention other participants I conversed with in one of the various lines (port-o, dinner, coffee, breakfast, etc.,) were all seemingly nice, enthusiastic people. And that’s one of the main reasons why I’d recommend this to others. If asked to do it again, I would. But, definitely not something I’d want to do every year. Every couple of years may seem more appropriate; however, next time I’d want to leave the northeast and give it a try elsewhere.

For more on this event from the Four Horsemen, check out Colton’s recap on the New England Running Company website. 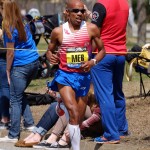