“I am the passenger and I ride and I ride. I ride through the city’s backsides. I see the stars come out of the sky. Yeah, the bright and hollow sky…” – Iggy Pop

Last month I helped my son Casey drive his car across the country. Which is to say, that I spent the better part of our 5-day journey sitting in a passenger seat. And, let me tell you, for a border-line control freak like myself, that is no easy task. In my family, I drive the bus. I decide where, when, and how we go. Especially on long road trips! But on this 3000 mile drive, that took us from New Hampshire to California, I was merely a passenger. And, it was quite the eye opening experience for me!

Start to finish, this trip was Casey’s baby. He was the one beginning the new job in San Francisco. He was the one who planned the route, decided the duration, and determined what (if any) side trips we’d take.  For the most part, he wanted to get there as quickly as possible – 10 hours on the road (covering 650 miles per day) with each of us driving for about half that distance, on average. We stayed on Interstate 80 almost the entire time. We gassed up quickly, ate in the car, and put the hammer down. Making “good time” the whole way.

Now, that is not to say that I didn’t enjoy myself. I did! I took full advantage of my opportunities to exercise control – wherever possible. I went for runs up sandy mountains, through sage brush fields and along railroad tracks that cut through the middle of swamps. I explored the beautiful scenery around Lake Tahoe, the rocky outcrops of Squaw Valley and the redwood forests of Muir Woods. And, I made pit stops to see some stunningly beautiful architecture in Wyoming, Utah and all along the California coast. All places I’ve never visited before now.

I had a wonderful time… in between countless hours of staring blankly through the passenger side window. Or, hanging on for dear life as we careened down twisty–turny mountain passes. Or, slamming on my invisible brake pedal as we zoomed through California freeway traffic. During these times, my son was in complete control (usually driving with one hand) and all I could do was sit back and “enjoy” the ride. What else was there to do, really?

“…I am the passenger. I stay under glass. I look through my window so bright. I see the stars come out tonight. I see the bright and hollow sky. Over the city’s ripped backsides. And everything looks good tonight. Singing, la la la la lalalala…” Another thing that’s been out of my control lately has been my running. It seems like my Ultra Tour of 2014 has had some serious carry-over into this year. I’ve been all over the place mentally. I’ve over-trained, under-trained and wracked my brain. I’ve battled lethargy, fought apathy, struggled with weight gain and even tangled with depression. But, no matter how hard I try, I can’t seem to get myself back “on-track” and that’s been a pretty difficult thing to accept. Especially for someone like me.

I like to plan things out. I like to make a goal and work towards it. Point A to Point B. With no compromises. But this year has been different. The drive just isn’t there. And, I don’t know when (if?) it will return. As discussed previously, I’ve realized that I made a Deal With the Devil to complete my first hundred miler and now it seems I’m paying the price. Bad running (and worse racing) has dealt a series of blows to my psyche this year. And for someone who likes control, I’ve seemingly lost all semblance of it. This was not part of the plan. And it’s been a very humbling ride.

Speaking of which, I have to laugh when I see the “God is my co-pilot” bumper sticker on people’s cars.  Because, if we’re truly being honest here, God (or fate, or karma, or luck – if you prefer) is the real pilot out there. Sure, sometimes we’re able to give directions, or point out obstacles, or areas of interest along the way. And, if we’re really lucky, we may even be able to call for a potty break once in a while. But what I’ve come to realize lately is that, for the most part, we’re pretty much just hanging on for the ride of our lives.

Now, don’t get me wrong. This is not a “Woe is me!” way of thinking. That’s a loser mentality that I absolutely cannot stand. The “What’s the use?” mindset that keeps people from taking responsibility for their lives. No, on the contrary. This is more of a “Control what you can, and don’t waste time worrying about the rest” viewpoint. To me, this thought is like an island of zen, in an ocean of chaos. And, it’s rather freeing when you begin to think of life on those terms. Accepting what the day brings, but being prepared to make the most of it.

“…Oh the passenger. He rides and he rides. He looks through his window side. He sees the things that he knows are his. He sees the bright and hollow sky. He sees the city sleep at night. He sees the winding ocean drive…”

Scott and Jenny in the Mahoosucs.

Last weekend I had the opportunity to catch up with world-famous, ultra-runner Scott Jurek during his record breaking attempt to run the 2178 mile Appalachian Trail in less than 46 ½ days. I have been following his progress for weeks and, while camping with my family at the beach in Maine, I decided to take the 2 hour drive up to the AT to see if I could meet up (and perhaps hike) with him. Unfortunately, the GPS tracker he was using to upload his whereabouts had stopped working. So, once again, I was put in a situation that was beyond my control.

If I wanted to see him, I’d have to be flexible. So, I decided to just focus on controlling what I could. I had no idea where, when, or for how long I’d need to hike that day – or night. So, I brought ALL of my hiking stuff with me. Whether the hike was going to be an out and back, or one big loop. Whether I had to catch him from behind, or intercept him en-route. Whether I’d be climbing the Carter-Moriah Ridge, or venturing into the Mahoosucs for the first time. I’d be ready. Or, at least, as ready as I could be.

Prior to setting sail, I also had found out through a mutual friend that Scott was craving donuts. Vegan donuts. So I scoped out a number of vegan bakeries in Maine between the beach and the mountains. Unfortunately, that number turned out to be two. And one of them was closed. And, of course, the one that was open had plenty of bagels, but no donuts. Oh well. Bagels it is. So, bagels in hand I traveled north – searching for Scott.

Fortunately, I didn’t have to search very hard as he and his sizable entourage were prepping for that day’s hike at a Bed & Breakfast right on Route 2 in Shelburne, NH. It was amazing to see just how big a group he had around him. Two camera crews. Multiple photographers. A half dozen hikers. And, countless other on-lookers. All the while, he just quietly sat on the edge of his van putting on his socks, and his shoes, and steeling himself for the day ahead. His 40th on the trail. It was getting to be crunch time. Just 6 1/2 more days to travel the remaining 300 miles.

Over the years, Scott Jurek has given so much to the ultra-running community. His achievements are legend and his generosity has more than matched those achievements.  He is a worthy ambassador for our sport. He’s got a huge heart, loves ultra-running and wants to share it with as many people as he can. So, it should come as no surprise that he’s spent a lot of his time on the trail shaking hands, posing for pictures and signing autographs. Even at the possible expense of his goal.

With that in mind, I opted to stay in the background on this day. Scott Jurek owes me nothing. I was there solely to encourage him on his journey – like he’s encouraged me on mine through his words and actions. I was, once again, a passenger on this trip. I was there to soak in the madness, not add to it. So, I cheered him on as he and his posse headed down the trail and then I quietly approached Timmy O’Neil (one of Scott’s friends and trip managers) offering my gift of vegan bagels to Scott and his wife Jenny.

As I was preparing to leave, Timmy approached my car and asked me to come back to the van and meet Jenny. I was hesitant at first because, as Scott’s primary support team member (and his wife), I knew she must have been under a significant amount of stress. But, I soon agreed and was very happy that I did. Jenny was kind, gracious, thankful for the gift and the subtle show of support. And then she said something that I’ll never forget… “A lot of people have been asking me if Scott can do it. How far does he have to go? And, how fast does he have to hike to get the record? And, all I know is, he’ll do whatever it fucking takes!” She was certainly no passenger on this adventure! She spoke the words quietly and calmly – yet powerfully. And I believed her!

Later, out on the trail (despite falling twice and getting lost once) I managed to rendezvous with Scott and his team as they climbed Mount Success – the last peak on New Hampshire’s portion of the AT. Soon he would be crossing over into Maine, the last of 14 states on his epic 2178 mile journey. I smiled and cheered and encouraged him with all the energy I could muster as he powered up one of the final big climbs of the day. I could see the strength and determination in his eyes and secretly hoped that some of that strength would rub off on me and help me seize control of my own personal challenges.

In the end, I hope that Scott succeeds on the AT and that Casey succeeds in San Francisco.  But, will they? Who knows? I do know that they BOTH have all the tools they need to do so. But, the rest is beyond my control. And what about me? Do I have what it takes to right the ship and save what’s left of my sinking season? Beats me. I’m just a “driver” trying to learn how to let go of the wheel… 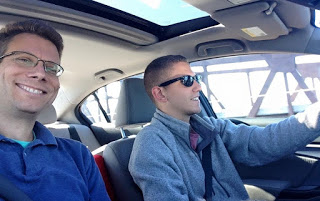