Before the Friday Night Lights Went Out

There was a ton excitement on the track at Dillboy Stadium for the Western Mass Distance Project’s Friday Night Lights 10k races. Even the lights going out abruptly (after the racing) wasn’t enough to put a damper on the evening. While we’re busy putting the finishing touches on our own race that is a mere hours away, we can provide this quick summary before we bring you are full coverage from this event.

It was a chess match for most of the race between Laura Paulsen and Hilary Dionne. Paulsen broke away very late to win with a 35:01. Hilary was a few ticks back in 35:10.

Louis Serafini waited until late in the race to make his move, but when he did it was absolutely vicious. There was no doubt. Louis finished with a fury and won with a 29:56. Ryan Place held on for second in 30:11.

Tom Derderian kept his word and handed his shirt over to Louis on the infield. The moment was so hot that the Dillboys had to shut the lights of on it.

We have a ton more race footage and pics, which we should be getting around to processing shortly. 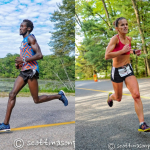 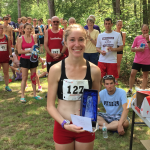