True Withdraws From Beach To Beacon

An update to the press release we posted earlier this week regarding the Beach To Beacon 10k Road Race this coming Saturday:

As you may know, Ben True has withdrawn from the 2015 TD Beach to Beacon, citing fatigue from the U.S. Championships and recent travel to Belgium, where he was chasing and was able to achieve the 5,000m qualifying standard. He has opted to rest in preparation for the World Championships in Beijing in late August. While this news is disappointing, TD Beach to Beacon officials understand his position and hope he is fully rested and ready to go at the World Championships.

In addition, the death of renown Kenyan athletic manager Zane Branson on Saturday (he suffered a heart attack after running) has shaken the group of runners that he represents and they have pulled out of the TD Beach to Beacon. That group includes Patrick Makau, Nikolas Bor, Joyce Chepkirui, Emily Chebet and Tadelech Bekele, who is Ethiopian.

Since then, a top athlete from Ugandan and a young Kenyan have been added to the field as long as two additional top American women. The up-to-date list of elite athletes, with biographical info and bib numbers, can be found here.

Too bad about True, but still excited to see how the rest of the deep American field fares on Saturday. The additional American women are: Elizabeth Costello and Stephanie Dinius.

Also added were Ugandan Moses Kipsiro (replaced Makau) and Paul Kipchumba Lonyangata of Kenya. Full detail on all the field changes can be found at the link in the release.

And then there’s this…

#tbt to this week last year. Per usual, I was out of shape for one of my favorite races of the year #beach2beacon. Meagan waited for me, dragged me along through the last three miles, and then we crossed the line holding hands. Grateful to have such a great friend and training partner who has always had confidence in me- from some encouraging words at 5am before the start of the #JFK50 to this week’s hot and humid #yankeehomecoming, when she insisted I could run faster than my predicted 65 minutes. I won’t have Meagan to pull me through this year’s race, but I’ll definitely make sure to eat her share of post-race treats! #craftconceptracing #craftrun #altrarunning

Good luck to Sarah and everyone else running on Saturday!

Rop Wins Another Hot One in Newburyport 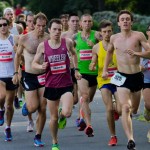