Truckin’ It to the Finish

As we’ve previously reported, the battle for second place at the Run 4 Kerri came down to a sprint. The winner of this dual would stand one spot higher on the podium, adorned with silver while the loser would be left to a lower rung with bronze…and tire marks.

Yup, there was an incident on the course, and you can’t say we didn’t see it coming…

It looked like traffic control might be an issue at the last, vital intersection. Here’s how it happened according to Matt Pelletier:

While Matt might be biased, here’s an unbiased account from Shawn Whalen, who happened to be standing there to see the whole grisly event unfold:

At the intersection, Officer #1 was on the right side (as I was facing the intersection) and Officer #2 was on the left. As Glarius came through, they stopped traffic and then the long delay before Matty and Eric threw everybody off a bit. After a few seconds the officers let a few cars through. As Matty and Eric approached the intersection, Officer #1 (on the right side) held up his hands to stop traffic. Then Officer #1 turned to face Matty & Eric and waved his hand to point the runners to the quick left-right dogleg (as if Matty & Eric didn’t know the way!). The guy in the truck saw Officer #1 wave his hand and point (for the runners), and took this as a signal to proceed forward so he pulled past Officer #1. Officer #2 saw the truck moving and threw up his hands in a “stop” motion. The guy in the truck stopped right in front of Matty & Eric, pretty much bringing them to a dead stop. Matty yells, shrugs a WTF? motion and pounds on the truck a few times as they go around the back end. The truck then pulls forward another 10 feet as the guys enter the final straight, and that is when Scotty (Mason) took the photo. The guy in the truck talks briefly to Officer #2 and drives off. The intersection was a bit messy in management; Ryun? (from New Zealand) also had a car come within a couple of feet of him (but I don’t think he even noticed).

Matt and Eric truck on towards the line, with the infamous Truck in the background. Courtesy of Scott Mason Photo.

So it seems it was just a case of mixed signals, at precisely the worst time. It happens. Luckily no one was hurt.

While Matt’s interview was tongue in cheek (we think…but again we didn’t see if he was actually run over or not), he did relay one hilarious and true piece of info. Matt told us that after he crossed the line. Lonergan turned back to him and said something along the lines of ‘Did you see my mom out there? She was driving the truck.’ Awesome. Well played, Eric.

Articles, Racing Truckin’ It to the Finish
« Previous Story 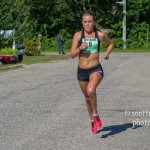 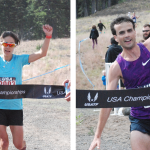