Seventeen miles a day. Even done on doubles, that’s no small feat. Well, we’re now supposed to believe that that is in fact what Eminem (aka Slim Shady, aka Marshall Mathers) was running according to his interview with Men’s Journal.

I got an addict’s brain, and when it came to running, I think I got a little carried away. I became a fucking hamster. Seventeen miles a day on a treadmill. I would get up in the morning, and before I went to the studio, I would run eight and a half miles in about an hour. Then I’d come home and run another eight and a half. I started getting OCD about the calories, making sure I burned 2,000 every day. In the end I got down to about 149 pounds. I ran to the point where I started to get injured. All the constant pounding from the running began to tear up my hip flexors.

Here’s the thing: anyone who knows anything about running probably knows that it takes a tremendous amount of strength to get to that level of mileage. Systems are developed while tissue and bone alike are strengthened…or fall apart. It’s not necessarily the 119 mi/wk that will ‘tear up’ your hip flexors, etc. Even for the seasoned runner, 70-80 miles per week can (and will) take its toll. So Shady wants us to believe that he just jumped right into it and was strong enough to even get to that point? Then only the strain of 119 mile weeks broke him down? Come on!

He did do an hour each session on the treadmill, but not running at 7:30 pace. It would start out with a walk, then slowly build up to a jog. By the end he would be ‘sprinting’ that 7:30 pace and he would see the current pace of 8 mph on the treadmill display and think that he did it. Pardon us for doubting his intelligence, but with the amount of drugs that have zapped that brain, combined with the overall wear & tear associated with his rock n’ roll/gangsta rap lifestyle, we could rule this out

He was doing 8km each session, which would still be a lot of mileage, still a little hard to believe…but we could buy it.

Mike Rossi was coaching him. Mike would instruct him to hop off the treadmill after a quarter mile. The treadmill would still be running, of course. Shady would then hop back on when it hit 8.3 miles and triumphantly finish the 8.5 mile run.

Any theories on how he could be wrong? Or do you just believe him? We’ve heard from some of you…

For what it’s worth, @levelrenner, I believe in Shady’s 119. He just doesn’t have to tweet his mileage for it to count. #realrecognizerabbit

Didn’t think of it that way…

.@levelrenner He would run 8.5 miles each treadmill session? Why? One would think he’d run #8Mile. — Eamon Portico (@EamonPortico) August 6, 2015

What do you think? 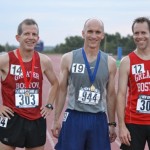 Reflecting on a Masters Medal