Lost in the Woods

Michael Wade is a Gate City Strider, and ultra guy, a contributor to the Level, and now an aspiring author. He has recently completed his first book and is now working to get it published. Here’s a little about the book, from Michael himself:

It’s about running, hiking, fatherhood, and pushing beyond your comfort zone. It’s basically an action-adventure, parenting, self-help, travel journal disguised as a memoir. The collection of stories inside the book are told from the perspective of a regular guy, with a keen sense of humor and a high threshold for pain, trying to raise two families while attempting to strike a balance between his home life and his passion for constantly exploring the envelope of his abilities.

Here’s an excerpt, which Michael says is about being stupid and stubborn.

I got lost in the woods. Not “dangerously” lost mind you, but lost none-the-less. It was annoying, it was frustrating, and it was definitely not the way I planned to start the first big weekend of hiking during my aptly named “Summer of 48”.

The great state of New Hampshire has 48 mountain peaks that are 4,000 feet high (or higher) and over the years I have climbed 36 of them.  Some, like Mount Washington, I’d done more than once. But, for one reason or another, there were 12 that I’d missed altogether.  Some because they were pretty remote, such as: Cabot, Waumbek, Isolation and Owl’s Head.  And, some because they just weren’t on the way to wherever I was going, such as: Willey, Hale, Tecumseh and The Hancocks.  So, in 2013, I made a plan to rectify that situation. Fully.

Now, any normal person would plan a trip around hitting just those 12 peaks and be done with it.  Check the NH 48 off their “to do” list and move on.  However, if you know anything about me (which I hope you do, by this point) then you’ll know that I’m far from normal.  So, what I decided to do that summer was run/hike ALL 48 four-thousand foot peaks.  In 6 days!

The fastest known time (or FKT) to complete all 48 of New Hampshire’s four thousand footers is: 3 days, 15 hours, 51 minutes and 18 seconds by Tim Seaver of Calais, Vermont.  Tim accomplished this incredible feat in 2003. Over the next 10 years, many “speed hikers” tried to break Tim’s record, and failed.  Which just goes to show you what kind of super-human effort it took to achieve that time.

I had ZERO interest in trying to break any land-speed records.  I just wanted to hike these peaks as fast as I possibly could and still be able to enjoy beauty of the trip.  To that end, I set up some guidelines for my adventure.  I wanted to hike for 12 hours a day.  I wanted climb an average of 8 peaks per day and I wanted to make sure to rest for at least 8 hours every night.  I also wanted to do it all without asking anyone to “crew” for me.  Meaning, I’d be doing all the prepping, driving and re-fueling on my own.

Logistically speaking, hiking all 48 peaks in one shot without crew support is a bit of a nightmare.  Particularly if you are: on a tight schedule, planning on doing some “one-way” traverses and want to be as efficient as possible. Unfortunately, on my Mount Cabot excursion, I got lost almost immediately and spent the next couple hours being as inefficient as one could possibly be!

I had heard all about the poorly marked, off-limits, portion of trail on the Lancaster side of Cabot due to a Forest Service dispute with a land-owner.  But, as part of a last minute schedule change, I moved Cabot from part two to part one of my hiking itinerary and was therefore a little bit unprepared for the task at hand.

Due to this dispute, the Mount Cabot Trail has been permanently removed from the AMC Hiking Maps, however a description of the trail route is still outlined in great detail in the AMC Guidebook.  Which, of course, I left at home.  Nevertheless, I boldly stepped out of my car, went around the gate which was clearly labeled “No Trespassing” and proceeded to make my way up the mountain – number 10, out of 48, on my itinerary. Note: Please do not try this at home!

Initially, I found the route to be very well marked with signs.  Unfortunately, those signs stated, in no uncertain terms, that this trail was “closed” and that I really shouldn’t be there.  Which, of course, made me want to be there all the more! However, with just tad more briskness to my pace. The signs were also spaced quite frequently and only served to reduce the risk of trespassers (like myself) from actually getting lost, sort of like angry breadcrumbs. How kind of them!

At some point along my hike the signs disappeared, which should have given me my first clue that I was off course.  However, at the time I just assumed that the landowner must have figured that after what seemed like a mile worth of signs, if those darned “scoff-laws” hadn’t turned back by now, no additional amount of signage would make any difference.  So, I proceeded onward and upward – past some logging equipment, a rusty car, an outhouse and a vacant shack.

Just past the shack, the trail I was following got a little dicey. It ran alongside and then over a stream.  This is fairly typical for most hiking trails, so I just continued up and over the slippery rocks.  On the other side, the trail was a little more difficult to pick up.  This is also fairly typical since Hurricane Irene had made a mess of most trails near any kind of rushing water.  Further on, I saw a tree marked with orange flagging tape.  And then another.  And another.  “Oh!” I thought, “This must be the way.”

Eventually the flagging disappeared.  Undaunted, I pressed onward.  I had remembered from my reading of the route description in the AMC guide that, a little further on, the trail was supposed to cross the stream for good and then head west up to the summit.  So, I decided to continue forward on the left (west) side of the stream in the hopes that I’d come across it again and get myself back on track.  By this point I was in full on bushwhack.

After going at it for almost a full hour I decided to change my tactics.  I thought if the trail didn’t happen to cross the stream for another mile, I’d be at this forever.  So I zig-zagged across to the east side and tried to find the trail again over there.  No luck.  Now, my shins were blooded and my spirit was nearly broken.  After a few more minutes of suffering I gave into that nagging urge to quit and headed back down.  A complete and utter failure.

Full of anger, I steam-rolled back down the valley – kicking, cursing and stumbling over everything in my path.   I seethed, I shouted, and I beat myself up with every step.  “How could I be so stupid as to not bring the book?”  “Who else would be so weak as to just give up like that?”  “Why couldn’t I find the right path?”  “What was I going to do now?”  I was in the middle of trying to hike all 48 of the NH 4000 footers and I was failing. Miserably!

About a half mile from my car, at one of the many intersections along the route, I happened to break out of my “fog of self-loathing” and glance to the right.  I noticed (just past a small road gate) another “trail closed” sign.  A sign which I must have missed seeing on my way up.  “No! It couldn’t be.”  Yup, it was the trail to the Cabot summit that I should have been on all along.  Smooth, inviting, and clearly marked as far as the eye could see.  What a fool.  It was right there the whole time and I walked right by it!

After everything I went through to get there, the summit itself was rather anticlimactic. Particularly since it was socked in with clouds by the time I reached it. I tagged the top and came back down laughing at my foolishness. The funny thing is, when I was “lost” I honestly thought that if I could just try a little harder, the right path would reveal itself to me.  As endurance athletes, we have been conditioned to never give up in the face of adversity and to push ourselves that much harder when we’re close to quitting. But, in this case, I couldn’t have been further from the truth – or the trail. And, ironically, if I hadn’t “quit” I would have never found the right way to go!  Which leads me to a very important question:

If what you’re doing isn’t working any more, how do you know if it’s time to try harder or turn back?

I’d like to think I would have turned around sooner if I hadn’t been tricked into thinking the orange flagging tape was leading me in the right direction.  But, perhaps I’m just too stubborn to see some realities that others might see right away.  And, if it wasn’t the flagging tape, perhaps I would have just looked for another sign that confirmed I had chosen right path.  Who knows?  Certainly not me.  I’m still completely lost!

Michael has created a Facebook page for his new book Going Further. He has been be posting his thoughts about the writing, editing and publishing process. He’s also been sharing excerpts (both words and pictures) from the manuscript and will post where (and when) you can buy the final product when it becomes available.

Michael also has a blog which can be found at: www.rocknrunner.blogspot.com 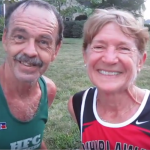 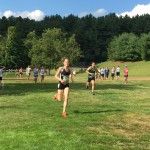