Vassallo with a commanding lead, courtesy of Jim Pawlicki.

Dan Vassallo repeated as the Derby Street Mile champion on the streets of Salem, MA last Friday night. The 4:25 that Vassallo ran equalled his winning time from 2014. Only difference this year was that the field was slightly more competitive. Slightly. Although it’s safe to say he probably never felt comfortable with his lead in a race as short as a mile, his margin of victory was still comfortable.

But what were Dan’s thoughts on the race?

@levelrenner I was inspired by Chruniak and Pak breathing down my neck, and by @MeaganNedlo yelling “Tim Ritchie’s faster than you.”

Coming in second was Dan Chruniak in 4:32, followed by Junyong Pak in 4:35. Just after the podium spots we had the top masters and senior runner come across the line: Brett Budzinski in 4:45 and Jason Barnes in 4:47. The senior Barnes was locked into a close battle with young whippersnapper Ross Patterson, who also ran a 4:47 but not quite 4:47 enough to beat Barnes.

Jennifer Howland stood alone atop the podium for the ladies. Literally. The others weren’t in the picture. Howland was so fast that she was up and then off the podium before others could react. Jennifer ran a 5:01, followed by Katrina Vassallo in 5:07 and Tara Paulin in 5:17. Next in was senior runner Lauren Leslie in 5:55.

Howland is all by herself at the top of the proverbial mountain. Courtesy of Michael Bleakley.

We almost had another all-Vassallo winner’s circle. A first and second place finish is still pretty impressive! 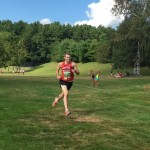 XC Season Kicks Off With a Festival 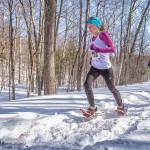