Local mountain goat Kevin Tilton recently undertook one heck of a challenge: the Leadville Trail 100. He wasn’t out there alone, as he had his teammate Dave Dunham there to crew and pace him. It was a first for both of them, and luckily for us Dave also wrote up a piece on his experience and got some nice pics too.

My CMS teammate Kevin Tilton signed up for the Leadville 100 mile race a few months back and when he mentioned it I immediately offered to join the adventure as his crew and/or acting as his pacer. This would be Kevin’s first attempt at 100 miles and my first time acting as a crew.

We arrived on Thursday afternoon and headed to the continental divide for a nice “easy” run on an old railroad bed. The 10,000’ of altitude was definitely a shock to the system. After a day of driving and flying from the east coast to the Rocky Mountains it was nice to get out and stretch our legs. Barely a mile into our run we spotted two gigantic moose which was an awesome start to our visit. Soon after we drove to the house we’d rented and after a long day retired while the sky was still bright.

View from above Twin Lakes

On Friday we awoke to temperatures in the upper 30’s with clear skies. We drove into town and checked out part of the Mineral Trail loop, an 11.6 mile bike path in and around Leadville. We enjoyed an easy 5 mile sunrise run and both were impressed by the beauty of the surrounding 14,000’ peaks. It was a rare treat to run in August with winter hat and gloves. We killed some time that morning with coffee and a course preview (drive) to the first aid station which was located on the western edge of Turquoise Lake. It was a peaceful scene but probably wouldn’t be on Saturday at 6:00am as the runners would come storming through.

We met up with 650 of our compatriots at the mandatory pre-race meeting. It was a long meeting that included way too much fluff for my taste. There was very little quality information, and as first timers we both had concerns. There seemed to be a lot of self-congratulatory back slapping and sponsor speeches. A few interesting nuggets from the meeting included the race stats. Of the 800 allowed to enter 650 picked up their numbers (so 150 left the nearly $400 entry fee on the table). The 650 starters included runners from 26 countries and 47 states. The mayor of Leadville had an interesting take on life stating that Leadville’s population is 2,700 and the cemetery has 20,000 “Man that is history”. The chief of the medical crew also gave some great advice on nutrition and hydration, including “This is an eating marathon with some running thrown in”.

That night was a bit later than we’d hoped as we stayed up until 8pm to meet up with Peter M and his pal who were also planning on meeting Kevin at various aid stations and pacing him over the second half of the race. We had a planning session to get the final details hammered out. Kevin had prepared well for the race and knew what he’d want at each aid station and more importantly he had a good plan for finishing the race. He’d studied Matt Carpenter’s spreadsheet of splits which would give a good idea of how long it should take to get to each aid station based on a 20 hour finish time. He’d also be wearing a heart monitor in the early stages to ensure he did not go out too fast, which could have dire consequences. I’d be meeting him at 13, 27, 50, 76, and 87 miles and also would run/hike with him from 50-55 miles up Hope Pass (the highest point in the race).

It was a very short night and I had more trouble sleeping than I would the night before a race I was running. This would be a new experience for me and I was worried about all the things I might do wrong that could mess up Kevin’s race. Eventually I drifted off and 2:30am came way too fast. Kevin had a quick breakfast and I slammed some coffee and we were out the door by 3:00am. We parked about a mile from the start with the dual purposes of giving me easy egress but also so Kevin could loosen up a bit. At 3:50 I grabbed his extra clothes and headed back to the car. There was an amazing roar as the field stared down the street.

It was 39 degrees and pitch black with the stars absolutely blazing when I got to Turquoise Lake. On the drive over I heard Social Distortion blast out “Ring of Fire” and knew it was going to be a peach of a day. I was among the earliest arrivals at the aid station so I was able to park close by (others would park as far as 2 miles away). Then the waiting began, which was the toughest part. Kevin had his time goals and would hopefully be playing it smart, there would be plenty of time to pick it up later. His schedule had him coming in to the 13.5 mile mark in 1:45 to 2:00.I was happy to see him on the “slower” end of things and he hit the aid station right at the 2 hour mark. He traded bottles and got rid of his headlamp and extra layers and was off. I headed into town for a much needed coffee as the sun started to peek above the mountains.

A short drive later and I arrived at the alternative crew zone at mile 27. This was much quieter than the first aid station, with many choosing to meet their athlete at the 24 mile station. Once I got everything prepared I headed off for an easy 3 mile run, which I needed to really wake up. About 15 minutes after I returned Kevin arrived, again pretty much dead-on his projected pace. He had moved up from about 50th place to about 25th place and looked good. I slathered sunscreen on him as he dumped his empty bottle and picked up a full one along with some gummy worms. He noted “I’m looking forward to hiking” and I reminded him to stay within his limits. The stop took less than a minute and he was off down the trail. He’d hit 27 miles in 4:18.

I had a long drive, but plenty of time to get to Winfield a ghost town located at the 50 mile turn. The out and back course meant that runners would go up and over Hope Pass twice, with a 3,000’ climb and descent in each direction. I was looking forward to hiking with Kevin up from 50-55 then turn around and head back to Winfield. While waiting I got in another 3 mile run as I still had three hours before Kevin was scheduled to arrive. I was getting very nervous about whether I could do the climb; the air was so thin for a sea-level runner.

I watched the leaders come through the turn and tried to be patient. I kept looking at my watch wondering when I’d see Kevin. Right around the time I thought I’d see him, there he was! Unfortunately he was no longer in the race. He had a lot of quad pain from 30 miles onward and knew that it would be impossible to continue especially with the huge climb ahead. He walk/ran to the 39.9 mile aid station and called it a day. With no cell service he had to catch a ride to Winfield to let me know his day was over. On the ride back he noted that “this will be my last ultra”. I hope not, I had fun and would like to crew again (and pace!). We headed back to town and later caught the winner finishing and THE NEXT DAY caught the final finisher at just over 30 hours.

Kevin certainly wasn’t alone in having a DNF, typically half of the field does not finish. This year 317 of the 650 starters finished. There were 25 starters from New England and 12 of them finished. 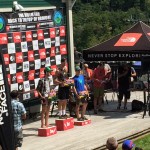 Race to the Top of VT, Back Down, and…