All week long we’ve taken a good hard look into the mindset of the top contenders on the men’s side for the USATF-NE All Terrain Runner Series. Although the race isn’t nearly as high stakes for the ladies (thanks a lot Kasie Enman!), there is still some maneuvering to be done before the dust settles.

First & second place are both locked up. What’s left is the fight for the remainder of the podium/money spots. Freddi Pare has already locked up the 40+ age group while Jennifer Rapaport has done the same for the 50+ (according to Dave Dunham’s non-binding super fun time analysis).

As was the case with the top men’s competitors, there is some uncertainty as to the race day status for the women. Actually, there’s quite a bit more uncertainty here.

So what’s your primary goal on Sunday?

Pare: I would need a jet-pack and roller-blades to catch up to the other women in the race. (Maybe no one would notice?) If I spent more time running miles than eating cake I could probably be a phenomenal runner like my competitors are. But I love cake. My primary goal for Sunday is to get across that finish line and that is not an easy task for someone who only puts in 15-20 miles a week. I’ll have a bunch of my fellow Mystic Runners there to get me across that line.

O’Dell: Yeah, no Seasons for me. I have a Mountain Series to attend to. From one series to the next.

Rapaport: I know that Amanda Wright, Emma Kosciak and Kristin Tetrault are injured so that puts me into 4th overall I believe, assuming Jen Brooks shows up to run. I can’t beat Jen Brooks and I don’t have a right hook like Ryan Carrara so my plan is to run a tempo paced effort since the course is hilly and I am not planning to rest or taper for it as is my usual style. Since this is also a USATF-NE Grand Prix race, if Somerville Road Runners fields a women’s team, it could prompt me to run a little harder/faster. But I won’t know until I show up.

Brooks: If I race Sunday the main goal will be to finish out the series, and additionally to not do anything that will screw up my September training and or have me sick as a dog at my son’s soccer tournament later that day. I swore off hot summer road races after getting heat stroke at Falmouth two years ago, and my racing will make the day quite a bit harder for the rest of my family; I’m really not sure yet what I’ll do.

Tetrault: Unfortunately, there’s only about a 10% chance that I’ll be there on Sunday. I’ve been injured for the whole series, but stupidly tried to run through it. Every year I try to do something out of my comfort zone, and the series was that for me this year. I had never snowshoed or raced on an indoor track before this year, and had never tackled a race like Loon. I just wanted to throw myself in there and experience it, and even though I’ve been banged up, it has still been such a positive adventure! Running through the initial pain caused a dislocated SI joint, a rolled hip, a torn muscle, and some structural imbalances, so I really haven’t raced like I would have liked to. I never thought I’d be too competitive in the series, as I was such a newbie to them all, but the injuries definitely didn’t help. After a few months of physical therapy and only short jogs on flat surfaces, I was cleared to attempt the xc race two days before the actual race. It was tough to jump right in there, but a good way to feel out where my base is now.

While everyone is tackling the 20k on Sunday, I’ll be drinking coffee and finishing up my thesis. I hope to get back into the routine of training and be back out there running hard in a few months. I plan on coming back to next year’s series way healthier.

Jen Rapaport ran a 1:23:42 in her first ever mountain race. Courtesy of SNAPacidotic.

What’s your biggest takeaway from the series this year?

Pare: As for the series, I’m really proud of myself. I stepped out of my comfort zone so many times and am the ONLY female to complete all 7 events. (There should be bonus points for that.) It was my 3rd time running Merrimack and Loon but I never would have competed in the other events had I not done the series so thank you for that. Along with the ATR, I’ve been competing in the mountain series and have had a great season with tons of PR’s. Best of luck to everyone running and I’ll see you at the finish line (unless you all leave by the time I come across…and that is very likely.)

O’Dell: I actually wasn’t planning to even do the ATR Series, but as the season unfolded, I found I was perfectly suited for it. As a runner with a major lack of focus, I’ve discovered that I’m a decent competitor in all of these disciplines. Once I realized I could pull off that sufferfest they call the track, I knew I could tackle 5 races of the Series and take second place. I’m pretty psyched about it. The Series has broadened my horizons this year by stepping out of my norm especially with the track and XC events. (I didn’t even know adults ran XC until recently.) It’s been a great series to be a part of this year, and I look forward to it again next year as I continue my training for nothing and everything all at the same time. ?

Rapaport: My biggest takeaway from the series is that I have gained a lot of respect for the Mountain Running community. That SH*T is hard! If Loon is in the series next year and we are still allowed to miss one or two races, that is the one I would eliminate. I actually rather enjoyed the track races and it turns out they weren’t as scary as I thought. The difference was running the track events with other ATR women who were just as scared as I was. Helping each other get over nerves and joking a little really helped. I am actually looking forward to some track meets this winter now.

Brooks: I’ve always raced a mix of road and trails, so initially I was simply excited to see a series that incorporated the things I love. The snowshoe race was a first for me though, and I’m hooked. Track was another one – it had been more than 15 years since my last track meet and I definitely felt out of place! I loved getting pushed out of my comfort zone and getting to know some of the other ATR competitors. Between fluke injuries and schedule conflicts this year feels like unfinished business – I’m sad it’s ending and can’t wait to go another round next year.

Tetrault: Doing the series exposed me to some new opportunities and I really enjoyed being a part of it. The women of the ATR were just awesome! I looked forward to seeing who was showing up race after race, and while I’m not super-competitive, it was fun to follow the standings. I’m hoping next year you can add a water event though, because I’ve become a pool running champ!

Not a lot of good news there (in terms of depth and health of the field for Sunday). But we did learn a little about the toughness of the competitors, especially Kristin. How many others would’ve pushed through so much? Actually, there’s one left and she perhaps had the best response of all:

“Are crutches a legal way to complete the ATR series?” 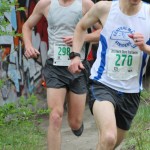 Dunham Breaks Down the ATR Standings 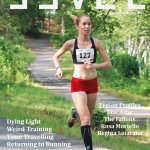