Michael Wade is a Gate City Strider, and ultra guy, a contributor to the Level, and now an aspiring author. He has recently completed his first book and is now working to get it published. Here’s a little about the book, from Michael himself:

It’s about running, hiking, fatherhood, and pushing beyond your comfort zone. It’s basically an action-adventure, parenting, self-help, travel journal disguised as a memoir. The collection of stories inside the book are told from the perspective of a regular guy, with a keen sense of humor and a high threshold for pain, trying to raise two families while attempting to strike a balance between his home life and his passion for constantly exploring the envelope of his abilities.

Here’s an excerpt, which Michael says is about running, family and change.

There’s nothing quite like the smell of manure in the morning.  It’s more effective than coffee at waking you from your slumber and nearly twice as strong!

This is just one of many semi-lucid thoughts that bounce around my brain during a solo run down a country road in the middle of July.  It’s only 6:30am but the humidity is rising faster than the sun and adding to the acridity of my bovine bouquet.  As I near the farm house where the scent is originating, I catch a glimpse of the putrid perpetrators.  A dozen cows stand motionless in their pen – save for the slow but synchronized turning of their heads as I run by.  The quizzical looks on their cowy faces only serve to reinforce the growing sense that I’m a stranger in a strange land.

When I was a child, my family and I made numerous summer-time road trips to visit our relatives in America’s Heartland.  And, in the summer of 2004 I decided to do the same with my own two children. 24 years had passed since I last set foot in the tiny town of Madrid, Iowa and when we drove up the only road that connected it to the Interstate, I wondered if it had changed as much as I had during that period.  As it turned out, the answer to that question wasn’t so simple.

I pick up the pace and attempt to outrun the smell. As I crest a rise in the road I find myself deep in yet another world.  For as far as my eye can see is row after row, and field after field, of sweet Iowa corn.  It looks like an emerald sea of leaves interrupted only by the horizon.  As an easterner, the ocean analogy is the best I can come up with to describe this awesome sight.  And, I wonder if someone from the mid-west, upon seeing the Atlantic for the first time, compares it to a huge blue cornfield.  The idea of this makes me laugh as I make my way down the dusty road that parts this lush sea of green.  I feel a little like a jogging Moses.

When we first arrived, the kids and I drove through downtown before heading on to my uncle’s house.  From this point of view, through the windshield of our Honda Accord, things hadn’t changed much from when I was 12 and riding along in my uncle’s late-model station wagon.  Main Street and the town center looked pretty much as it did in 1980.  There were no strip malls or shopping centers that had since become an all-too-common plague upon our New England neck of the woods.  However, on closer inspection, the quintessential small American town from my childhood had, in fact, been radically transformed.

I jog to the end of the quiet dirt road and turn left heading back towards town.  This new road is paved and flat and stretches out for miles. I begin to think that I’ve bitten off more than I can chew with this run.  The heat is starting to take its toll and Madrid seems so very far away.  I put my head down and zone out, trying to cover the distance as quickly and painlessly as possible.  My “Zen-like” state is shattered by the sound of an air horn and a rush of wind as a mirror whizzes past my head.  The mirror is attached to a truck that swerved to narrowly avoid striking me.  At this point, I’m not sure who’s more shocked: me, at the prospect of being killed? Or, the farmer behind the wheel, at the sight of a runner on the road in the middle of Iowa?  I continue on my way eager to finish in one piece.

After looking more closely from the seat of our car I could see that the town was markedly different from the way I remembered it.  The movie theater and roller skating rink had closed, the five & dime was boarded up and the “For Sale” signs outnumbered the few weary residents that I saw trudging along the sidewalks.  The town had not been altered by the clutches of a greedy developer but by the gentle hands of time.  Not unlike the wear and tear that was appearing on my own chassis, Madrid was starting to show its age.

I round the bend and head straight for the center of town as my run is thankfully nearing its exhausting conclusion.  Now, from my much slower pace, I can clearly view the changes that have occurred over the last 24 years.  There are a few houses that are vacant or in various states of disrepair.  Others are literally falling in on themselves.   Some teenagers are hanging out by the convenience store and stare at me as I shuffle past.  I hear one of them share a joke with the others. No doubt at my expense.  Something about “nice legs”, or “real pants”, I suspect.  I try my best to ignore them, but I grow even more unsettled as I near my uncle’s house. This really isn’t the same place I remember from my younger days.

When I was 12, Madrid seemed like the nicest and friendliest town on earth.  Most kids my age looked forward to vacationing in Disney World, but not me.  I liked Iowa.  It was a real place where it seemed like there was always something interesting going on. Even if it was nothing that was happening, it sure felt like something to me.  It also had real people who would seemingly do anything for their neighbors and, unlike back home, truly seemed to care if you, in fact, have a “nice” day.

These memories of the past and realities of the present cloud my head as I approach my Uncle Jack’s house.  His home is the pretty one on the corner.  It’s small, white and has a front porch that wraps around to the side with a big ol’ swing that faces the tree-lined street.  I finish my run and collapse in a heap on the steps, feebly attempting to stretch my aching muscles.  I’m feeling sorry for both myself and the town at our shared loss of innocence, when my aunt Louise appears at the screen door.

But, before I can express my sorrow over how different everything feels, she says, “How was your run, Mikey? You look tired, dear. Why don’t you come on in and rest awhile? Your breakfast is ready. I hope you like blueberry pancakes! ” And, in that moment, I realize that even though some things are different, the things that matter most have stayed more or less the same. Sure, many of the physical aspects of both myself and the town may have changed over the years, but my love of family and the emotional connection to the memories we’ve shared still remain very much intact.

And, as I made my way to my aunt, my uncle, my kids and my big plate of flapjacks, I am reminded of some bright person who once said, “You can’t go home again” and, while I do understand that sentiment, I couldn’t disagree more.  I believe that the home of our past is there in the closing of our eyes, but the home of our present is here in the sharing of our lives.

Michael has created a Facebook page for his new book Going Further. He has been be posting his thoughts about the writing, editing and publishing process. He’s also been sharing excerpts (both words and pictures) from the manuscript and will post where (and when) you can buy the final product when it becomes available.

Michael also has a blog which can be found at: www.rocknrunner.blogspot.com 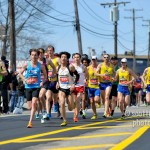 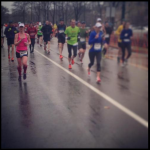