Grand Prix Series to be Settled at Lone Gull

The Lone Gull 10k this Sunday is the final event in the 2015 USATF-NE road racing Grand Prix Series. The two grandest of the Grand Prix top spots will be determined on the streets of Gloucester, MA by scenic waters of Good Harbor Beach.

Heartbreaker Louis Serafini has the slimmest of slim advantages over Matt Pelletier (Brooks), by a score of 44-43 for the men’s open title. Meanwhile, Katie Misuraca (BAA) holds a 2-point lead over Laura Hagley (Millennium) for the women’s open title.

The one point lead might be all Lou needs since he’s bested Matt in 4 of their 5 head to head match ups on the circuit. The shorter stuff has belonged to Lou, while Matt edged Lou in the half marathon (New Bedford) and picked up a big 10-spot with his win in the marathon (VCM, which Serafini didn’t race). The odds seem to be in Serafini’s favor.

“I’ll be there , but I don’t think I’ll be in the same race as Lou. I’m running the JV race,” said Pelletier.

Lou was equally as positive, saying “I’m just happy to be in the hunt. I’m gonna race hard and hope for the best. I have more respect for Matt than any other runner out there. He works hard and that’s something that you can’t compensate for.”

Bitter rivalry this is not. Normally we get a lot more bravado, even if it’s in all in good fun. “Unlike Macknight, I know my place. Sometimes, you gotta know when to hold em…know when to fold em.” Poor Macknight…not even a part of this and he’s still taking shots.

“If only I had a Heartbreaker party bus squad. Then it’d be a done deal.” Does that mean that Lou is beatable without the power of The Bus? It certainly brought him good fortune at the WMDP Friday Night Lights 10k. We’ll have to wait to find out.

It’s much tougher to tell with the ladies. They split they’re 4 head to head matchups on the circuit. They both have missed events, but Katie’s 5 points in the 5k (Hollis, where Laura didn’t compete) is all difference at the moment. Maybe momentum is the revelatory factor, and if that’s the case then it swings to Katie who bested Laura in the last two events.

Not only is it close, but it’s also unexpected. “This caught me by surprise. I didn’t realize my place in the NEGP standings until after the 20k when I was looking for results,” said Laura.

The sentiment was echoed by Katie: “It is a surprise to find myself in the lead for the series because I haven’t won a single race. I suppose this is the plus to showing up to most of them! Laura is well within striking distance and has an excellent running resume. I’m going to do my best to make her work her hard.”

Now that we’ve spoiled the surprise, let’s take a closer look at their battle. A key would be how they can handle the tight turnaround between the 20k and the 10k.

Katie did not ease up on the accelerator: “Last week was a pretty heavy week for me with track work, a tempo and a long run on tired legs. The 20K was brutal and I was spent. It took quite a bit of time to work that out of the legs. Those hills just did.not.quit.”

Maybe it was for that reason that Laura knew getting over the 20k would be a challenge. “I knew recovery from a race like that would be difficult, especially with that placement in the season. I adjusted my race goals accordingly prior to the race, so that after the race I was able to bounce back pretty quick to get some 10k pace work in later in the week.”

With Laura’s fall marathon plans it’s especially difficult. “Since the NH XC festival, I’ve been building my mileage toward 100mi/week before I taper for a fall half marathon, likely Phily. It happens that my build to and completion of 100miles/week ends on Saturday, and I race the 10k on Sunday. I obviously didn’t consider myself a contender for any series win when I planned that training schedule!”

Neither has a win within the series this year. Sure, breaking the tape is fun, but it’s arguably much more impressive to win the whole series. That’s the race within the race to watch out for. “While I always aim to run my hardest and go for the win, I rarely seem to take the cake,” said Katie. As you’ll note, my highest finish in this series is a 3rd place finish. I’ll take my usual approach with shorter distances on Sunday — go hard from the start and try to hang on! You never know who will show up — I hope to remain in the mix.”

Well, Katie was 3rd overall at the 20k, but she was 2nd within the USATF-NE women so she earned 2nd place points for that effort.

Laura appreciates a good win, but has her eyes on the bigger picture. “Winning is a great result of following one’s goals, but it’s rarely a focus, and I don’t anticipate that result on Sunday!”

She went on to explain: “Every race and every workout has a purpose/goal, otherwise it’s not in my schedule. For example, the 10-miler and the 20k I set specific purposes and therefore specific pace goals, and was able to follow-through. This applies to workouts too. In races we have the pleasure of running all out, but they still have a purpose within the training cycle. For me, the 10k will have a specific goal, which is to race as hard as I can within my current cycle of training and to run faster than last year.”

Of course, a lot can happen between now and Sunday. All four assured us that they’d be competing but, it’s all up in the air until the gun goes off.

Katie is admittedly “completely unfamiliar with the course which leaves me a little anxious.” Might she opt to skip it then?

Laura expressed concern over satellite coverage & heart rate data on her Suunto: “No point in running if there’s no data.” That’s a growing trend to be wary of. Imagine race delaying the start until everyone could pick up a signal? Oh the horrors!

Of course family comes first, and Katie knows how to celebrate a good birthday. “Sunday is my husband’s birthday and the race will require significant travel for me, there is always the off-chance that I’ll just scrap it and go for bloody marys and a heavy-duty breakfast instead.”

We also have to take into consideration the fact that Laura lives in Hanover, NH and there’s feisty wildlife to deal with. Friday is garbage day in her neighborhood, and we all know garbage attracts bears. “I could get into a brawl with a bear on my morning headlamp run.”

Laura’s pretty tough, so we’re expecting to see her warming up in new bear fur pullover on Sunday morning. 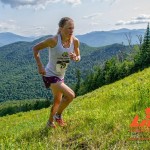 Enman, Leslie Rule the Terrains…All of Them

40+ Foods That Will Make Sure You Stay Stress…