By Paul Kirsch, team manager for the US Jr National Mountain Running Team

Living in the mountains of New Hampshire, the first thing that struck me when we arrived in Wales for the 2015 World Mountain Running Championships was it reminded me a lot of the terrain of Vermont and New Hampshire – but with a lot more sheep and plenty of narrow roads. To give you an idea, this year’s races started in the village of Betws-y-Coed in North Wales (pronounced better-see-coyd, meaning “church in the wood”) and our bus transport to preview the course from where we were staying in Lladudno (pronounced “hlan-duud-no”) had some great adventures on the narrow roads along the way.

This year’s races were up/down courses, as the World Championships vary every other year between up only courses and up/down. During our course preview, the uphill had a mixture of old paved road and trail with about a kilometer of muddy and slippery rock singletrack. The downhill was a screamer- fast but with some tricky footing due to some moss on the worn down small rocks in the middle of the old road bed so the footing might be tricky.

This year’s US Team had promise at all levels- from Nike Cross Country Nationals Champion Allie Ostrander on the Junior Women’s Team to Joe Gray, on his 8th mountain team leading the Senior Men’s Team.

The day started out with Alaskan, Allie Ostrander leading the Junior Women’s Team. Rare is it that someone is so gifted at all aspects of running at such a young age but Ostrander had proven herself already, with her multi-time wins at the Mt. Marathon Race to her records as the fastest high school runner in Alaska and the US last year. Allie led from the gun to the tape, taking a thirteen second lead to the top of the mountain, turning that into a 39 second lead at the finish. Ostrander looked relaxed coming in to the finish line, enjoying every moment of her first international race. Her ascent time was one of the top 7 fastest ascent times of the day for both junior and senior women, covering the first ascent in twelve minutes. Allie was a favorite going into the race and she showed why. Allie was followed by juniors Lily Tomasula-Martin and Katie Bowe, who finished in 30th in 22:49, and 38th in 24:29.

The Junior Men’s Team has never won any medals at the World Championships- reminding us all of the challenge of Junior US runners who often have little to no experience doing mountain races compared to their European counterparts. 2015 would be the year that would change. Levi Thomet, from Kodiak, Alaska led the U.S Junior Men, with his gutsy second place finish, breaking the 13 year medal drought with a Silver Medal performance that showed his strength and versatility. On top of that, the Junior Boys began a theme for the day on the importance of placement and team competition with Ben Butler finishing 9th and then Tayte Pollman finishing 18th followed by Connor Wilson in 46th. Pollman was 24th at the top of the last climb, making up six spots on the final 2km descent. This would prove to be essential to the team scoring, giving the US 29 points to third place Great Britain’s 30 points and 3 points above the fourth place team, Italy which got 32 points. This led to the historic feat of the first ever Junior Men’s Team Medal as well- a hard earned Silver Medal.

The team competition and support theme continued into the women’s race where Team USA won a Silver Medal. The 4 woman squad was led by All American Steeplechaser Kimber Mattox, who finished 6th overall in just her second mountain race ever. She was followed by Vermont’s Kasie Enman in 10th and Morgan Arritola in 11th and first time team member Allison Morgan in 18th. Enman and Arritola both went into the race not at 100% and really focused their scoring and placement on getting into medal contention, with both moving up several spots on the second lap. Allison Morgan had the highest finish ever for a fourth place team member finish with her 18th spot and said afterwards that she is really hooked on mountain running and plans to try out for the team again next year as does Mattox, also a first time team member.

In the men’s race, the US Team finished fourth, just out of medal contention, but with really strong performances by Joe Gray with his 5th place finish as well as Andy Wacker in 13th, followed by Oregon’s Ryan Bak in 22nd with a time of 53:30. The final scoring member was Nevada’s John Patrick Donovan in 37th place timed in 54:44.

It really is a sign of the quality of the US Team’s athletes that the lowest finish of any team was 4th.

Next year will see the teams head to Bulgaria for an up-only course on September 4th. Although the qualifier is yet to be determined for 2016, we can be assured that there will again be amazing athletes trying out- with road, trail, track and mountain backgrounds as the US Mountain Running Team continues to grow.

My own special moment to remember of the trip will be, as it was in 2011 and 2012, hearing the US National anthem getting played during the awards ceremony when Allie was awarded her Gold Medal. It is always inspiring to see 30+ countries gather to compete in sport- and enjoy each other’s company and gain new friends- and then to hear the anthem of your country during the competition fills you with a pride that is hard to describe.

Allie Ostrander’s ascent time was one of the top 7 fastest ascent times of the day for both junior and senior women, covering the first ascent in twelve minutes on her way to the gold medal.

You can find more photos from the races and awards ceremony here (by Richard Bolt). 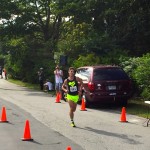