With the USATF-NE Road Grand Prix at a close, the vast majority of this year’s competitive New England road races are behind us. But there’s still plenty of races to chose from, especially for those who belong to a New Hampshire-based running club. Sunday morning, the New Hampshire Grand Prix Series continued it’s slate with the Convenient MD 10k on the Windham Depot Rail Trail. A flat out and back course along with cool weather brought some fast times to the town of Windham, NH, including a pair of course records.

The race got out quick with recent Tufts grad Joe St. Pierre sandwiched in between two Whirlaway athletes in Sam Fazioli and 2014 race winner Alex Hall. Fazioli and St. Pierre would eventually break off and race stride for stride until the last tenth of a mile, where St. Pierre would use his 1500 meter speed to put in a blazing kick for the victory. Fazioli and Hall would follow up in 2nd and 3rd. Both St. Pierre (32’45) and Fazioli’s (32’51) times would best the course record of 32’53 Hall set last year. The top master’s runner was also quite quick as Rich Smith placed 4th overall in 35 minutes 11 seconds. Smith’s Upper Valley Running Club teammate Rob Edson would cross the line as first senior’s runner on the day with a time of 35’58.

On the women’s side, Dartmouth student and new UVRC member Phoebe Novello would dominate both the field and the course record in an impressive time of 36 minutes, 34 seconds. That takes down Amy Bernard’s 38’09 from last year by over a minute and a half (Amy is no slouch of a runner either)! The next two top women to cross the line were Lauren Tilton of the Greater Derry Track Club and top female Master Pam Aman from the UVRC. The duo ran times of 40’38 and 40’52 respectively. Not only was Aman the top master, her coach Kim Sheffield was the 2nd masters female, finishing less than a minute behind her. The top senior’s female was Julia Martinage, who’s already been seen tearing things up with the Greater Derry Hot Flashes in the USATF-NE Cross Country Grand Prix. Martinage finished the race in 42 minutes, 52 seconds. Check out some first-hand video footage courtesy of Mike Giberti:

The strong finishes of Hall, Novello, Smith, Aman, and Edson would lead the UVRC to a very important team victory over Greater Derry in the New Hampshire Grand Prix, where they are now much more comfortably ahead of GDTC heading into the final race. Will GDTC catch back up, or will UVRC put an end to the Derry Dynasty? Series finale takes place in North Conway for the White Mountain Milers Half Marathon on October 25th.

Also, check out a pretty sweet photo album of the race, courtesy of Richie Blake 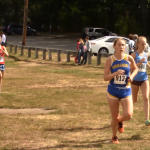