Kasie Enman has had a heck of a year…

But there’s something missing from that list of highlights…an Olympic Trials Qualifier. Although the win at Vermont was welcome, missing the qualifier left Kasie with some additional motivation for training hard through the hot summer months.

Matt Pelletier might be getting a lot of buzz as defending Hartford Marathon champ, and for all his wins in Vermont, and rightly so. But Kasie has a world title. Can he compete with that? As you can see here, she’s ready and he’s got his work cut out for him:

This is great for so many reasons. We’re used to seeing the guys talking smack or getting all FarmStrong, with the ladies having been seemingly content to let the guys have all the fun…until now. Looks like the ladies are stepping more boldly into the spotlight for the 2015 Hartford Marathon. Guys, the bar has been raised high…especially for one Matt Pelletier. It’ll be interesting to see if anyone can top this. 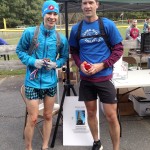