Previously we shared with you the list of the competitors in this year’s New England’s Finest program at the Hartford Marathon. Now we dive a little deeper and get some more info on the goals of the competitors, what it means to be in the program, and some status updates. Unfortunately, not all of them will be competing as planned.

Getting the bad news out of the way first…

Two elites, Alex Leuchanka and Jared Burdick, unfortunately won’t be able to make it. For both it was an unexpected scheduling conflict. For Alex: “I had a prior commitment to present my research thesis work at the American College of Sports Medicine Conference, and the date of my presentation fell on the marathon weekend after I was already accepted into the NEF program. Hopefully I won’t have the same issue next year.”

Jared had an overseas opportunity that was too good to turn down: “I got an unexpected opportunity to do an ultra in France two weeks after Hartford. I didn’t think I could do both at 100% so I chose not do the marathon this year. I definitely want to come back to Hartford so maybe next year.”

Tough timing for them, but at least they’re missing out for good reasons and not because they blew out a hamstring winning a color run or something silly like that.

The guys kept their responses minimal and low key, at least in words. The pics and video are starting to roll in now and they are…well…not as low key:

On to the questions!

-What does it mean to be a part of the NE’s Finest program?

Tyler Andrews: I’m very excited to be heading back to Hartford for the second year in a row now. I had a great experience last year running what was then a personal best of 1’05’48 in the half marathon. This year, I’ll be stepping up the distance and running the full marathon as part of a long build-up towards the 50k World Championships in December and the US Olympic Trials in February. This will give me a great opportunity to test out my early season fitness against some of the best runners in New England and make sure I don’t get too far from that competitive zone. I don’t have a pump up video made, but I hope to have a good battle out there! Jerry Faulkner: I’m excited about this race this Saturday. I’m gonna go out and give it my best and try to get the W or set a personal record. I know Hartford’s going to have some great runners that’s what’s going make it exciting. Jon Joyce: To be apart of the NEF program is great, being surrounded by so many great and dedicated runners gets you really hyped up for a race.

-Was there a specific workout, or moment in a race, where you were feeling so good that you knew you were ready to take on Hartford? If so, what was it?

Sam Alexander: My most memorable workout of this training block was a 15 mi track workout with Matty P in the dead of summer

-How much of a factor do you think the weather will be for the race?

Will Sanders: I’m just looking to PR. As for the weather, I haven’t really looked, but it can’t be worse than last years miserable torture. Joyce: As for weather, it wont be much of a factor for me. Though I may not be “farm strong” my usual training grounds have a way of giving out some of their own challenges. In fact we call bad weather days “normal weather” and good weather days “weird.” For me, the worse the weather the more it will be like doing a long run from home.

-What is your primary goal on race day (besides winning)?

Joyce: My primary goal for this race is to get under 2:30, and wash away the travesty that was my debut marathon on the rolling hills of Manchester last year. [Editor’s Note: His 2:35:18 as a travesty is certainly debatable. It does speak to his talent though, so it’ll be exciting to see him break through with that time he’s been training for.]

-Are you ready for the fame that’s coming your way once you’re a household name after this?

Are they ready for the fame? When Matty won last year (wearing a Level singlet!), it certainly brought a lot of attention to him. He probably wouldn’t be the target that all the elite women were picking on if not for that win and all the fame and fortune that came along with it.

Will Sam Alexander take a back seat to Matt Pelletier tomorrow? We’ll find out in a matter of hours. 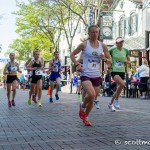 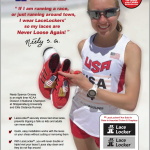