Transitioning from Marathon to 5K

As fall marathon season starts to come to an end, we thought we’d publish this article that originally appeared in the Jul/Aug 2015 edition of our magazine.

With spring marathons a distant memory and the summer months fast approaching, many runners shift their focus to shorter and faster races like 5ks. At first glance the marathon and the 5k have little in common and reside on opposite ends of the distance running spectrum. The bread and butter of marathon training—long runs, long tempos, high mileage, all with minimal focus on speed—-appears far removed from the fast workouts and sharpness necessary for a strong 5k. However, for the reasons detailed below, transitioning to 5k racing after a marathon is not as difficult as you might think. With a few tweaks and a gradual shift in your training focus, you can capitalize on your hard-earned marathon fitness and translate it into a stellar 5k.

Aerobic Base While the 5k is considered a short distance race (and it certainly is compared to the marathon), it requires an enormous amount of aerobic strength. In fact, a 5k is about 90% aerobic compared to 93% for a 10k (a marginal difference). Given this, it is easy to understand why you would have an advantage when transitioning from marathon to 5k. The months of high mileage, long tempos, and marathon-paced efforts create beneficial adaptations that result in a monster aerobic base, a key component for running a solid 5k. The strength in this area just needs to be coupled with turnover and speed work that likely has been minimized during marathon training. It is important to gradually reintroduce these two training components while maintaining your aerobic strength to run a fast 3.1.

Strides and Basic Speed After an appropriate recovery from the marathon, an easy way to begin the transition to shorter races is by including 6-8 100 meter strides at the end of your easy runs (you should be doing 2 or 3 of these each week). Strides are a simple way to practice running fast yet relaxed and slowly help you break out of the marathon shuffle and ease back into speed workouts. Strides improve your basic speed, turnover, form, and efficiency and pave the way for the more difficult speed workouts to come. Strides also address the neuromuscular side of training that may have been neglected during marathon training and help to strengthen tendons and muscles and potentially prevent injury.

5k pace workouts Once you have done strides for a couple of weeks, you can slowly introduce intervals at goal 5k pace. Start with short intervals at goal 5k pace. Begin with something like 8-10 x 400. As you gain fitness you can gradually increase the length of the interval run at goal pace and work up to repeat 1200 meters (or longer). A sample progression would be as follows:

While practicing goal 5k pace is critical, it is also important to include some shorter and faster intervals at paces faster than 5k. And don’t forget those tempos (albeit tempos shorter than those done in marathon training).

Grueling in a Different Way Finally, the pain associated with racing a marathon is unlike that of the shorter races. Racing a 5k can be a shock to the system at first. It takes some time to get used to hurting early and continuing to run fast through increasing pain and fatigue. Accordingly, after completion of several 5k paced workouts, you should tackle a few that help you both practice running goal pace and remember how to run fast on tired legs. An example of this type of workout is:

Running the 400 at mile pace after such a brief recovery is demanding, as your legs are already taxed from the 1200. However, after running the 400 at a clip much faster than 5k pace, each subsequent 1200 should feel challenging but relatively relaxed compared to the 400. This boosts both fitness and confidence because it allows you to finish the workout believing that you can maintain goal pace for the duration of a 5k. Ω 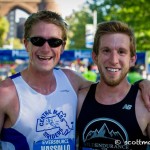 Expensive Running Shoes Do Not Make a Runner More…