Got this fantastic race report from a ‘tweener, Kevin Boughan, about his race at the Kent Pumpkin Run in Kent, CT this past Sunday (results). Eric Macknight won the five mile race in 25:02 with Will Sanders (25:27) taking 2nd. The shod foot Kendall Lyons beat out the barefoot Apryl Sabadosa for the win, 29:46 to 30:20. But the story here isn’t focused on the winners. This one is about racing, something that a guy trapped in no-man’s land on race day more often than not doesn’t get to experience as often as he’d like. With a deep enough field, he got to mix it up with a few other runners and then shared his experience on “how awesome it is when tweeners get to actually race.”

I live and run on the boundary lines – a cragged, hilly outpost in Connecticut, where Red Sox and Patriot fans mingle with Jets and Yankee fans, unaffiliated voters outnumber R’s and D’s, and no one knows what to call a hoagie/sub/grinder/hero in their non-accented accent…(it’s a wedge, for the record). Call it a no-man’s land really, a geographic purgatory, defined by proximity to I-84 – the shortcut from MA to NY, and that’s about it.

I race in a similarly undefined space – the space between the really fast and the masses – usually known as “second place” in a small local road race, a minute or so behind whichever ex-college stud shows up, and a minute or so ahead of everyone else. This is not a complaint. I know how lucky I am to be in this position, to be healthy and running relatively well. But running in a race, and racing are not the same. Racing, when it happens, is a sublime treat. Matching moves, working together, or chasing down, competitors – competing – there is nothing like that. And it doesn’t happen that often when you race in the space in between.

It takes something bigger than an everyday weekend 5k. It takes a race that brings in runners of just the right mix…masters guys who can still crush it, teens maybe not quite there yet, and ‘tweeners like me. This beautiful mix was present in Kent last Sunday, for the 39th Kent Pumpkin Run – 5 miles of tradition and hills and colors and charm in Kent, CT. And racing.

Kent is a “medium” sized race, 800 or so – not so big that I didn’t know who was on the line. Guys like Eric Macknight and Will Sanders would run a different race than the rest of us, quickly mere specs in the far away hills. But there were enough like me, enough to ensure that racing would happen.

Within a half mile the specs were gone, followed closely by two other strong runners. Meanwhile, a pack formed, trying desperately (and unsuccessfully) to hang onto its leader Kent Lemme, who gradually and unmercifully extended the gap mile by mile. I was in the pack with Pat Dennen (who I knew from a race earlier in the year), Mike Nahom, and a few others. But by mile 3, after the last big hill, it was down to me, Pat and Mike.

The three of us shared the work, silently trading the lead here and there. As we neared mile 4, Pat started to grow a little gap, maybe 10 meters. Mike came up on my elbow – “C’mon, man, roll with me and we’ll get him together…that’s it.” Racing.

With about three tenths to go, there was a slight course mix up. Despite my better efforts, Pat and Mike had dropped me – not by much, maybe 20 meters at that point. Two entrances to a shopping mall beckoned runners back towards the finish, the closer one and the correct further one. Pat chose the closer one, while Mike ran on correctly. Even though I’ve run this race before, for whatever reason, I followed Pat. It wasn’t long, and Mike had turned to yell at us that we were going the wrong way. I stopped about 25 meters down the wrong entrance. Turning back, I saw trailing runners closing the gap. Something snapped and I knew Mike was right and I bolted back after him. Pat wouldn’t recover.

I dug, trying to catch Mike – Mike who had been awesome in working with me down the hill, who had stopped to yell to get me to run the right course – he was now my target. It was right. It was racing. He understood.

As I started my kick, Macknight (probably well into his cooldown at this point) saw me and said “Eyes up, bro, go get him” (at least that’s how I remember it). In that weird moment when things sort of slow down even though you’re kicking as hard as you can, I remember processing that and thinking how cool it was.

Mike and I would finish the race within a step of each other…how we’d been for most of it. Racing. For tweener guys like me, it doesn’t happen often, but when it does, oh man. 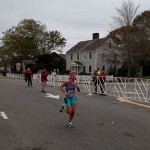