Sam Chelanga and Molly Huddle captured the .US 12k championships yesterday in Alexandria, VA. They weren’t the only ones with New England ties though, as the region was well represented.

Chelanga had lived in Hanover, NH for a little while, training with and coaching Ben True. Although he’s not in the area anymore, how can you not root for him? Sam ran a 34:35, narrowly edging Tyler Pennel (also 34:35) for the title.

In 4th was the USATF-NE Athlete of the Month for October 2015, Jim Spisak. The NE Distance athlete continues his torrid hot streak, only missing out on a national title by a mere 2 seconds. Jim’s 34:37 was only fractions of a second off of third place.

Tyler Andrews, who has his sights sets on the Olympic Trials marathon, ran a 36:39 and finished in 18th. From Tyler’s training log for that week:

Frustrating race. Got gapped after a big surge in 4th kilometer (2’48) and once I let a tiny gap form it was all over and I spent the last 7km in no man’s land feeling sorry for myself. Quite frustrated and disappointed with this one after such a great block of training but will stay positive and look forward. [check out the full entry here]

Tyler has the 50k World Championships coming up soon and with the way he recovers we’re sure we’ll see a fast time for him there. More on that to come later.

Molly Huddle once again led the way for the ladies in 38:36. It was yet another title in a truly remarkable year for Huddle, who not only live and trains in Providence but also is on the board of NE Distance.

Gotta mention Rhines again, since as a 41 yr old competitor her 12th place finish marked yet another masters title for her. She’s proving the old cliché ‘age ain’t nothing but a number’ to be quite true. She was also 44th overall in the deep field.

Taking a look at the age group results, we have to give a shoutout to Francis Burdett on his 41:39, 65th place performance. The 50 yr old Greater Springfield Harrier finished second in his 50-54 AG and lost out on the senior title to Steve Kartalia by a mere 8 seconds (41:31, 63rd place).

There were even more locals in the 60-64 age group, featuring one power couple that used to wreak havoc on the roads of New England: the Stirrats. Reno Stirrat, formerly of Whirlaway, finished 3rd in 60-64 men with a time of 45:03. His team also placed. His wife Susan faced some stiff competition in the 60-64 bracket.

Liz Cooney of Somerville Road Runners took second in her age group to US record holder Kathy Martin. Martin won with a 49:25 and Cooney came in next in 52:44. Susan Stirrat finished 10th in 1:01:52.

For those who like more stats to sift through, there were also some age graded results provided for the masters. Liz and Reno placed 8th in their respective women’s and men’s age graded results. Liz came in at 88.99 while Reno had 88.91. Francis Burdett was also in the top 20 (17th).

An earlier version of this was missing most of the age group results. Thanks to Thomas Cole for the additional info (and pictures). Also included a little more info on Tyler Andrews. For more on this: 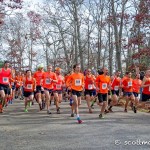 Venable Hunts Down a Win in Rhody