The lead pack was really cooking at the 35th Annual Slattery’s Restaurant 5 Mile Turkey Trot. The pace was so hot that they were in danger of overcooking the damn bird; the top 4 guys all broke 24:00. In this day and age of diluted fields in a flooded race market we don’t see stuff like that too much. It was impressive to see the fast times and deep field at the Bobby Doyle 5 mile race back in August (where 2 guys broke 24:00 and the to 16 all went under 25:00), but this was arguably more impressive. Although not as deep of a field, it was more stacked at the top and these times came in a non-championship race.

When looking back at the Doyle results, it was interesting to see Harvey, Allen and Sança there and how much time they dropped since August.

Can honestly say that I don’t know much about the Slattery’s course and how it compares to the Doyle course, or if it might be a little short, but either way there was a significant amount of time cut there! For Allen it was a big new PR and for Sança he tied his old PR (which also is the Cape Verde national record).

According to Harvey’s training log, here’s how the race unfolded:

“Eric and I were immediately leading the race from the beginning despite not going out super hard – seemed like no one else really wanted to lead. I was fine with it given there was so little wind. Came through the “1M” mark (which is very short) in 4:27 (5s slower than last year when we went out hard). Eric lead a lot of the next couple miles and we had a couple close calls with the lead vehicle and runners go the opposite direction. The pack was me, Eric, Bobby Allen, and Ruben. Ruben dropped off around 3.5 miles. Tried to push a bit down the long downhill in the 4th mile to drop Bobby who has run 4:00. Surged a bit on the final uphill and had the lead going into the final left turn. Eric passed me with maybe 300m to go. Gave one final push in the last 100m to edge Eric.”

From Eric’s perspective (and also his training log): “He (Harvey) lead up the final hill and I felt good on final downhill/straight and made a hard pass but legs locked up with about 100m to go! Kicked too early.”

Check out these splits (courtesy of Harvey):

For Allen, this capped a strong fall which saw him lead the UMass Lowell River Hawks to the America East conference championship (the first such title for any sport at the school). Bobby also became the first runner to appear in video on Level Renner in two different collegiate uniforms. We had originally interviewed him on camera after he won the Nassaney XC Invitational as member of the CCRI team back in September of 2012. Recently, we posted video of him and his River Hawk teammates being honored on the ice during intermission at a hockey game on campus.

The women were led by Olympian Kim Smith, who won it easily in 27:10 and placed 9th overall. Coming in behind her was Christine Shaw in 27:58, followed by Karen Roa 28:31 and Brielle Chabot (28:37). That’s right…Brielle Chabot! She looks to be coming back strong after hitting a rough patch (to say the least) the last couple of years. Brielle had won the USATF-NE 5k road championship (and placed 4th at the 5 mi championship) back in 2012 before injuries derailed her training. Good to see her back racing and making the proverbial podium.

**In the original post we had inadvertently left out Christine Shaw. Thanks to Liz Ryan and Mick Grant for pointing that out! 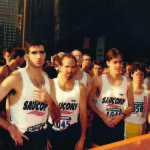 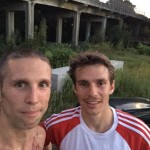