And then, what’s a C25K grad to do, but…sign up for another race! Quick, before rational thought talks you out of it! …which gives us a segue from family peppered by weather to family racing in general, which brings us to that most populist of events in running, the Great American Turkey Trot, or, the non-Catholic way of confessing and atoning for your dietary sins before they are committed.

The road to any starting line is pocked with potholes (especially in New England), and Dearest Spouse managed to find one, taking on the true nature of a runner by somehow popping a calf muscle a week after C25K and experiencing that injury-versus-race-date angst that only a runner knows. She healed in time. I, on the other hand, went the other direction. On top of the nagging left knee injury courtesy of that ridiculous (but fun!) White Mountains trail run, which was piled on top of the chronic left knee as yet unidentified annoyance, everything went achy again down south on both sides. Why? Who knows? Bad glucosamine? New shoes? Age? For whatever reason, I’ve been a hurting pup. Strike One! Thus I was looking at the Stow Gobbler 5K as a family outing, not a serious race.

Not a serious race means not tapering or resting, so on top of the aches and pains, Thursday arrived on the heels of four ten-mile days, two of which were at least partially hard workouts. Tired legs. Strike Two! 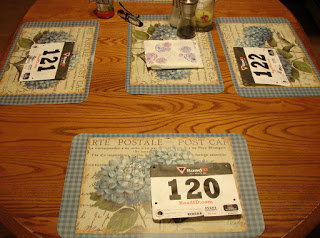 And let’s add an insult to this fracas. Ever organized, DS not only planned our day-before early number pickup, but went so far as to set out said tags for quick access in the morning. Terrific planning on her part, as usual. But the execution on my part was a bit lacking. The good news? I figured out before we got to the race that I’d left mine behind. The bad news? We were almost at the race by that moment. So while we had enough time to get back home for the pickup, my pre-race routine was considerably less than desired. Crappy warm-up. Strike Three!

This is, of course, a setup to segue from the general family racing theme to the unexpected place. But by now, based on the structure of this column, you knew that.

It’s not unexpected that when the race starts, I take all of the reasons why this should be a lousy day and toss them aside. Somewhere inside, that racing mentality commands this to happen. What is unexpected is that the results didn’t look like the aftermath of a three-strike lead-in.

There wasn’t a moment of cruising in this one. Being a Turkey Trot, where everyone and his brother shows up for their one race a year (and good for them), the crowd was large – almost a thousand – and the stampede off the line almost seemed Grand-Prix-like. At least forty or fifty leapt out ahead by the quarter mile. Though many faded in the next quarter, just holding pace with those who didn’t seemed unusually hard. I repeatedly forced myself to stick with this clump or that just to hold the intensity, because my body had no interest in doing so otherwise. But the clumps kept disintegrating as more and more fell off the pace, making holding that intensity difficult.

Mile one clocked in quite reasonable for a decent race, but knowing how hard the start had been, my head told me I’d already started the long fade. Mile two’s number, also quite reasonable, somehow didn’t pierce the fog that said this was just another ho-hum outing. Had it, I might have seen an opportunity to really slam the hammer rather than simply hold on. My bad on that one.

With three-quarters of a mile to go, both the women’s leader and a gentleman whom I knew to be masters class (this race had no fifty-plus division) crept up, crept past. Letting the woman go was easy. Letting the master go, being fairly sure there were no others ahead of us, was a bit tougher, but cognizant of all the slightly busted parts, and leaning on those tired legs, it seemed the rational thing to do. And hey, he’d recognized me on the starting line and said he’d actually read the blog, so call it a bit of charity in my heart. And we both got the same cheesy medals. And I made a new friend. So really, I’ll take second. What’s not to love?

I caught the woman, who told me flat out that she had no intentions of sprinting in, and that it was all mine. Really, I said, what’s to have? I was just figuring I’d photobomb her finish-line victory shot. I slugged it in with her a second behind.

The unexpected part? In my mind, I think of times I’ve run in years past, and don’t tend to think that years past were in fact years past. New ages should bring new expectations, but it wasn’t till later in post-analysis that this became clear. On crossing that line, the time on the clock was decent, but not exciting. Only later did it become clear that I’d just turned my best road 5K since hitting age fifty (two and a half years back) and not only my best age-graded 5K since fifty, but my third-best age-graded 5K, period. On three strikes. And to sweeten the day, DS, who’d previously run every one of her 5Ks at roughly the same pace, sliced off a minute and a half. Sweet.

So there you have it, a month, boiled down to a few pages, from the odd to the unexpected. It’s always an adventure. Time for turkey.

Check out Gary’s blog The Second Lap to get the rest of his story. And in case you were wondering, the Stow Gobbler 5k was won by Coby Horowitz in a blazing 14:34.7. Coby was nearly two minutes ahead of the field. Alicia Kaye picked up the win for the ladies in 18:15.8, and she had a pretty big lead herself.

Kolet, Jackson Worked Up an Appetite in Pawtucket