The heavily bearded Dan Button (SISU) was the top local finisher at the California International Marathon on Sunday. There was a heavy New England presence out there for this big, fast race and some of the group was part of an early mass migration with ultimate destination of the USATF XC club nationals in San Francisco this coming weekend.

But back to Button, who ran a new PR of 2:33:27 and finished in 48th place. Although there’s no official conversation chart to go from bearded to clean shaven times, we can assume that Dan’s beard cost him at least 5 minutes. There’s a ton of wind resistance there. In other words: really solid effort by Dan!

Dan was not the story of the day though. The big story was show that the women of New England put on. Four ladies broke through and nailed the Trials ‘B’ standard by running sub-2:43:

The BAA was well represented as both Duhon and Nurse were sporting the Unicorn symbol on their singlets and both placed in the top 10. None of that group had run the qualifier headed in and were running out of time, but they came through in the clutch.

Christine Shaw’s big race doubled the amount of Millennium Running ladies that will be flying out to LA in February. Her teammate Laura Hagley had already cemented her Trials status with a 2:39:51 at the 2014 CIM. Christine’s husband Phil ended up being the fastest Shaw on the day (he ran a solid himself 2:41:31), but an OTQ trumps that every time!

For more on the qualifiers, check out: 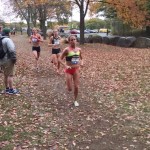