Wake Me, Shake Me, When It’s Over

A winter of training had gone reasonably well. I was making great time and feeling little or no fatigue as the Newton hills neared. That’s why I was so shocked and more than a little dismayed that my 2:30 pace effort saw me unexplainably veer off Commonwealth Ave. and wander up a steep, rock-strewn lawn, arriving somehow in the dimly lit mustiness of a cheap, wood-paneled hotel hallway, still running strong. I didn’t miss a step, somehow thinking that I couldn’t be that far from the course.

I was passing other runners who were traveling in the opposite direction. They seemed just as intent and focused as me and this doubled my panic, as not only was I throwing away valuable time, but I wasn’t even going the right way. It should have been comforting to me to wake up. I should have been relieved by the realization that what happened was little more than my prerace anxiety manifesting itself in a subconscious flight of fancy.

Why? Well, for a number of reasons, one of which is that I have a sense of direction that makes Christopher Columbus look like a homing pigeon on Adderall.

I got lost in six different races in 2003 alone, all of which took place on a little peninsula I’ve called home for most of my life. This happy little collection of misadventures prompted my club to give me a one-time-only “Joe Navas GPS Award” at the year-end banquet. I sold it on eBay.

“Oh, he’s blessed with an active imagination!” said my first grade teacher, Ms. Templeton. That was her way of softening up my parents for what her successors would refer to as, “A very creative mind!” (2nd grade) “A precocious young man!” (3rd grade) “A bit of a disruption in class!” (4th grade) and “Have you considered medication?” (5th grade and all following)… Eventually, someone, who to my knowledge wasn’t even a teacher, labeled me, “Destruction of Public Property/$ 200 fine.”

While running has done wonders to keep me in a proverbial straight line and not one that leads me to a cafeteria where the stainless steel stools are bolted to the floor, I am all too aware that the excess energy I burn in enjoying it is only keeping my anxiety in remission, not in true recession.

It goes without saying that many, if not most, runners find running provides them a more lucid approach to the act of thinking in general, but many also report that running is when the best ideas for works of art, for creative fiction, for mechanical principles reveal themselves. Whether it’s the rhythmic repetition of breathing or the release of endorphins or both, the act of repeatedly casting one leg in front of the other, to the ground and back again, allows one to sort things out in a way that other activities simply cannot. Some people in power have solved major social ills while running, while I’ve been known to work out entire Facebook arguments in the span of a single fartlek. They say with great power comes great responsibility. With me, a lack of either provides me with a couple miles to figure out how to convince the masses that Coldplay sucks.

A good friend of mine is a working artist and holds a Masters Degree in his particular discipline. Back in the day he was, by most measures, a very fast runner. He ran 2:16 for the marathon and on his way to that, busted out a 49 minute 10 miler and a 1:05 ½ marathon. A short time before this, he was doing his graduate studies. 100+ mile weeks with 50 hours of academic work on top were a delicate balance, one that he was all too aware of. He had talent for running; he had talent for art. It’s not as if the two were mutually exclusive, but he was beginning to develop a theory – or rather it was being developed for him – that one could not do both to their maximum potential simultaneously.

He knew plenty of guys who were on their way to sub 2:10 land. (Before you go and bust out Google Earth, no, it’s not anywhere near the Rift Valley, but it does have an embassy located in the storage room of a pharmacy in Rome…I digress.) These guys came in different shapes, sizes, and colors. The thing they all seemed to have in common was that they all had the personality of a case of canned squash. Nice guys all and if given enough time and clues, they could get a joke almost 90% of the time, but in the end they knew how to have a good time about as well as an IRS accountant in an Enron dumpster.

They slept well. They ate right. They listened to incredibly ordinary music and went to incredibly ordinary movies (early show only). If interviewed, they would invariably drop the most tasty nugget in the form of, “Well, just work hard, stay healthy and run well.” They had girlfriends named Liz and their dog was a well-behaved sporting breed.

My friend tried running like them for about two weeks. He didn’t make any art, he didn’t think about it. Pretty soon, he began having terrible nightmares. Nothing literally related to running nor to art, and that was what scared him. Both his loves could very plainly be represented by any number of dream state symbols, but he found himself having the most fearful fantasies playing out nightly about his family, monsters, war, and all types of grotesque fates.

He was dedicated to both. He was hardwired for both. He couldn’t give up one for the other nor could he excel at one without the other, even if his intention was to take that “excess” energy devoted to the less-important (whatever he deemed that to be) and pour it into the vessel of the other. He told me all this because one day he and I were discussing what these guys are made of. This led us to wonder why true, crazy characters and interesting personalities are such a rarity at the top level of our sport or in sports in general (Why the opposite is true at The Level is another discussion entirely).

It’s safe to assume that Hunter S. Thompson wouldn’t excel at anything but perhaps the shooting sports. However, I imagine that he’d miss more than a few targets and maim more than a few officials in his assuredly short-lived competitive career. Anyone who’s ever watched “Barfly” could surmise that even if Bukowski could have been a decent fighter, his tendency to launch into poetry regarding his opponent’s mother at rather inopportune moments would quickly bring his days in the ring to a close. And just close your eyes and picture Andre 3000 playing small forward for the Lakers. It’s a beautiful thing, isn’t it? He’d be the coolest benchwarmer ever.

At first glance, the whole theory for either of us could seem little more than a self-involved answer to the question of our own athletic inadequacy. As in, sure I could’ve been a contendah if it weren’t for this beautiful mind. Right, but let’s not ignore the 15 years of smoking and drinking, a training discipline that has been described by said artist/running friend as “determinedly pathetic,” and a genetic roadmap that has as its two main cartographers a squat Spaniard and a Pennsylvania Dutchwoman whose legs contain all the speed of a thousand bolognas.

I ran a marathon this fall, and for the first time ever, I dropped out.

Leading up to this marathon, I didn’t have the dreams, which I didn’t even notice. I had dreams of getting lost, of getting hit by cars, of missing starts and just plain not finishing before virtually all my most anticipated races. But this one? Nothing.

I knew I was burnt going in. I’d let myself take time off and I didn’t even know it. I was running. I was training. I was racing pretty well. Thing was, the prior year had seen me have my first injury that kept me out for a while. The process of coming back involved a lot of “I’m just glad to be here” thinking, because truly, I was.

I attacked my art, my writing, my photography, making music, all my nonrunning passions with serious vigor and realized they’d been waiting for me to do that for a while. Still, the flip side was that I wasn’t taking my running to bed with me, and the marathon exposed that lack of interest.

It’s like sex in that sense. You can sleep with all the beautiful people in the world and have a lot of fun doing it, but there’s a reason you want to be with the person you really love more than anything else because when you fall asleep, even if you have bad dreams about her, it’s better than having none at all.

So what do I want? I learned a long time ago (and again this fall) that I can’t have my cake and eat it too. It’s not that I’m that freaked out about having anxiety regarding something I love. Such things have been linked in me since as far back as I can remember. The thing is, this fall was the first time anything regarding that was absent, and I mistakenly allowed that absence to seem as if it were a form of relief, even going so far as to allow it to be misrepresented as transcendence. Instead, it was quickly revealed to be something far more cancerous and debilitating, toxic and weakening than anything of the sort. It was, in fact, apathy.

Some might welcome a lack of nervousness, and perhaps for those who were born without it, feeling it come on and acknowledging its presence is understandably troubling. But for me, it’s an annoying, inspirational, terribly loving companion and I may as well accept that we’re pretty much stuck with each other, musty hallways and all.

Joe Navas, humorist, is a senior writer for Level Renner. This article was originally published in issue #12 (Jan/Feb 2013).  We have to wonder if Joe has ever seen Semi Pro. It’s the closest we’ll get to Andre 3000 playing for the Lakers…

Articles, Commentary Wake Me, Shake Me, When It’s Over
« Previous Story 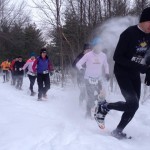 The Dion Snowshoes Go To…