One might say I get around. Life is short, there’s no need to always hang with the same crowd, though doing otherwise does result in a crowded dance card. But life’s also a balance, so I try to keep space on that card for events from the various clubs with which I’m affiliated. That means sometimes racing in Highland City Strider green, sometimes racing in Greater Boston red, and occasionally donning the Squannacook River Runners’ blue fish when I can offer a boost, such as is the case for the Mill Cities Relay.

Mill Cities, twenty-eight miles over five legs from Nashua to Lawrence, is at its core a contest for bragging rights. It’s a closed competition for a geographically select group of clubs with a complicated (though entirely logical and perfectly suited) scoring system engineered to identify the Top Dog Alpha Male of the running clubs of the Merrimack Valley. And believe me, there are some pretty heavy hitters in the fray. 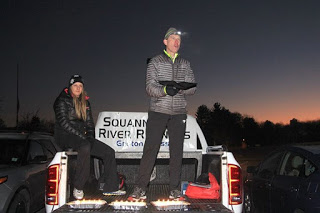 But in this tank filled with sharks, the Squannacook River Runners are decidedly fish. They wouldn’t argue with this assessment; after all, a fish adorns the club jerseys. More to the point, however, they’re a group who love the sport for the enjoyment of both the run and the camaraderie. They are not a group of hard-core elite racers. In other words, the Squannies are very much like my home club Striders, and though I don’t see them often enough to remember all their names when we meet (yet somehow they remember mine), I drop right into the comfort zone in this crowd.

Getting back to that Mill Cities scoring system, the key is that while quality is key, quantity matters too. Going up against clubs that run in elite circles, Squannacook isn’t likely to be in the running for the top prize, a truly artful (and heavy) steam-punk style trophy built of antique mill gears. But each team entered in each of the many divisions racks up points, so the more the merrier, and the Squannies make a big deal about turning out as many club members and teams as possible. So while this is a fun event with great people, I also figure that jumping in is a boost to this great club who so generously host their terrific post-Boston Marathon party every year and welcome me as family, despite my relatively infrequent appearances in their midst. 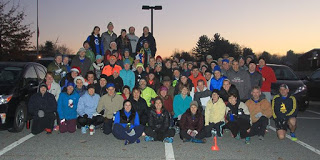 And if tossing in my bones to boost the cause is good, tossing in Dearest Spouse’s bones can only be better, right? So yes, DS, having dipped her toes into the running world, agreed to jump in as well this year, despite the social uncertainty of being placed on a different team and subsequently being trapped in a car for hours with people she’d never met. Frankly, I was probably more worried about this than she, as I wanted it to be a good experience. I needn’t have worried, to cut to the spoiler, she had a grand time.

At Mill Cities, the top three teams in each division win a coveted brick, yes, a real brick, supposedly recovered from a New England mill (though I can’t vouch for that level of authenticity) and adorned with a fine engraved plaque. The last time I ran this event I joined with a Squannie co-ed team and yes, we managed to brick (in this event, bricking is a verb). This time however, despite being paired with the best the Squannies had to offer, our “Fire Eatin’ Fish” were competing in the men’s masters division, always one of the toughest groups. Our chances of landing a brick were slim to none, and we didn’t disappoint. No brick was to be in our future, though our solid finish as the fastest Squannie Fish was a mark of pride. 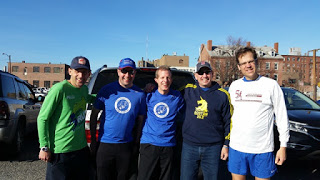 Knowing that we’d almost certainly not brick, and that Squannacook was almost guaranteed not to win overall in a way meant that this race carried little meaning other than fun. But the funny thing is that sometimes the races that mean nothing turn out to mean the most. No pressure, no worries, just run, run hard, and see what happens. And on occasion, out pops a gem.

The last time I ran this race three years back, I’d run the opening leg, a five-point-four mile segment that started with what we called the “Scooby-Doo start” on black ice that seemed to make our legs spin without much actual motion. That day, too, expecting no great outcome (though we did, as previously noted, end up bricking), I’d run an unofficial personal best at the five mile split, if a split is to be trusted – a best that still unofficially stands. This time, conditions were notably better – ideal, in fact, sunny, fortyish, and windless – and just about the same thing happened.

This year I’d volunteered for the fourth and longest leg, a nine-and-a-half mile stretch from Lowell to Methuen. I’d given the club an attainable though aggressive predicted pace. But with recent aches and pains, that prediction was looking rather daunting. And with my leg following a short and quick two-and-a-half mile leg leading into Lowell, the team would have little time after dropping our man to get me to the next exchange zone, so just getting warmed up and loose – all the more critical considering my rather arthritic state – was also looking rather daunting. The only answer was to simply run that short leg as well, just as a warm-up. Hopping out of the van a stop early, I managed to confuse a few racers, but hit my exchange zone primed to go.

Racing a later relay leg is a different game than racing off the starting line. By the fourth leg, thirteen miles in, teams are spread and scattered. Runners taking the baton alongside you might be fast runners on slow teams, slow runners on fast teams, or even runners on the “sunset” teams in divisions that run only the last three of the five legs. You don’t have anyone to key off. You’re not certain if there will be split markings. You’ve got no reference point to set your pace. But you’ve told your team that you’ll run a pace that really needs those things.

With the spread-out field, even the choice of whether to reel in the next guy is dangerous. You have no idea who he is, and this is, after all, nearly a ten-mile run. Going out whole-hog in the first mile based on the guy in front of you might not be the best idea. One could argue that this would be a good time to have a GPS watch, but that point is rather moot, since I don’t. That point is also rather moot because on creeping up alongside a competitor about three-quarters of a mile in, the pace she reported from her supposedly trusty GPS struck fear in my heart that I was far behind my forecast pace, yet later data would prove her report far-fetched at best if not outright wrong. One could then argue that my choice to remain a relative Luddite without GPS on my wrist has not been a bad decision.

By the time I found a split marking at mile two, my fear of being well behind my forecast vanished, replaced by a new fear of having indeed gone out too whole-hog when instead it became apparent how far ahead I was of forecast. That fear was amplified as the course grew excessively lonely, dropping to a lovely riverside trail, a truly terrific running space, but insulated from traffic, landmarks, and to a large extent, other runners. This quickly became a mental battle of me versus me and me only, nobody but my own head to drive the pace and damn the torpedoes. I’d later describe my race strategy as running the first mile really hard and holding on for the next nine.

But like my last Mill Cities, something about this race made things click. Yes, conditions were optimal. Yes, leg four is technically downhill, though in dropping only thirty-five feet over ten miles, I call that flat and really not a factor. Yes, it was a mental fight, but one that I was winning, as the splits kept clicking in ahead of forecast, with more time going into the bank to cover any late fade. By the nine mile mark I was quite toasted, but could have mailed it in to make my pace, being far ahead of the prediction that I’d earlier thought would have construed a good day.

Then a funny thing happened: it got even better. That last half mile – and I’d previously measured (and later re-measured) the leg as a legitimate nine-point-five – flew by at what the watch said was four-twenty pace. Laws of physics aside, that not being possible, it became apparent that those mile splits I’d been watching had been a bit long, which explained their gradual stretch compared to the highway mile markers. Had I known that mid-race, I might have dialed it back. Sometimes it’s better not to know what you’re doing so you don’t have the chance to remind yourself that you really can’t – or at least shouldn’t – do that. Ignorance can indeed be bliss.

When I mashed the numbers later, out popped a few surprises. Shaving that nine-five down to fifteen kilometers (nine-three) at the same pace put this one a mere quarter minute off my best. And stretching it up to ten, again at the same pace, would have minted a best-ever gem (recognizing that estimating upward is risky; one could tank in that extra half-mile). In either case, there was a personal trophy just for growing older, as on an age-graded basis, this one topped both charts. Seriously, who saw that one coming? Atop Mohawk Hudson and a surprising turkey trot, it’s turned into a rather surprising fall, especially considering how sore and achy I’ve been. 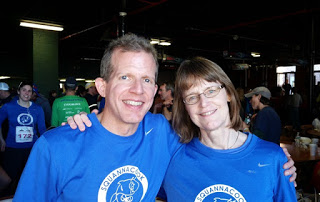 And as for Dearest Spouse? Her team, “Please Don’t Snow This Year!” managed eighth in their ten-team division, bettering the ninth place team by a mere eighteen seconds. Eighteen seconds that earned the Squannies an extra point, an extra point that moved the club up a notch to eighth overall among the nineteen scoring clubs. OK, so it wasn’t an earth-shattering impact, but seeing as how six minutes separated my team from the next in our division, my good day didn’t really change anything in the team scoring, so one can make a good argument that her run had a more direct impact on our club’s finishing place than did mine. One can also make a good argument that she’d never have predicted that. But after all, it’s only fair that she had her share of surprises, too. 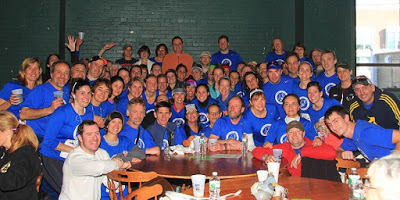 Follow all of Gary’s training and racing on his blog The Second Lap! 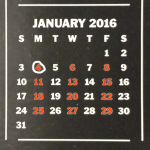